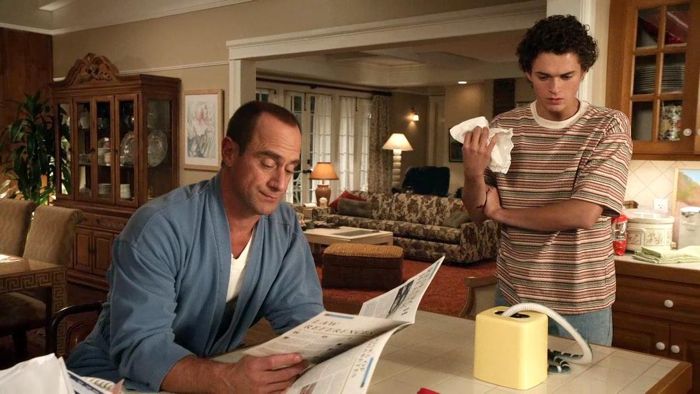 With the ‘regular’ TV season almost over, if such a label is even still accurate, FOX pulls one of its hold-backs out of the closet and slaps it on screen this week. SURVIVING JACK is set in 1991 (does every decade need to be represented on television this year?) and tells the story of Dr. Jack Dunlevy (Christopher Meloni, Law & Order: SVU), who scales back his hours at work and takes over raising the kids so that his wife, Joanne (Rachael Harris, Suits), can go to law school.

SURVIVING JACK is another family sitcom about another wacky, yet relatable, clan. The parents argue with the teenagers, but unlike most real parents, sympathize with them in cheesy emotional moments meant to bridge the age gap with understanding. This isn’t necessarily a bad thing, TV’s version of what a household looks like, one that falls a little short of reality, but it’s something we’ve seen done to death.

The “hook,” if you will, is that this is a period piece. Yet, even that doesn’t seem so fresh. With the 60s and the 80s so saturated on the tube and the 70s having been represented, too, it was only a matter of time before the 90s got their due, given that it’s been a full twenty-five years since the start of that decade. Reading Jurassic Park, seeing Christian Slater posters, and hearing some of the best music of the era might dredge up some nostalgia from the audience, but those are just details, not a reason in of themselves to watch a show.

And, of course, there’s an adult version of the main kid providing narration. On SURVIVING JACK, this role is filled by Kevin Rahm (Mad Men, Desperate Housewives). He does fine, but Rahm’s voice is so much less recognizable than, say, Patton Oswalt on The Goldbergs, that his casting could only work against this show.

As Jack Dunlevy is introduced, he’s all macho man, completely out of touch with who his teenagers, awkward, sex-obsessed Frankie (Connor Buckley, Deception) and pretty, sexually active Rachel (Claudia Lee, Hart of Dixie), are. This works for Meloni, who can play layered, but also excels at bonehead stupidity. Unfortunately, because the lead of a show can’t just be a stereotype, he softens before the first half hour is even over, finding ways to connect to Frankie.

I say unfortunately because I want to see a father on TV for once that acts like my father. My dad would never, ever open up enough to have a heart-to-heart with his child about feelings. That doesn’t make him a bad person, in my opinion, but every single patriarch on every single show is either an abusive, uncaring drunk (in the dramas) or a modern, sensitive man (in comedies), even when the show doesn’t take place in the modern day, that can get in touch with their inner self. Even the gruff ones allow that attitude to fall away from time to time, always revealing that hidden pussycat. Where is the realistic man who sticks to who he is and doesn’t play to the viewers’ heart-strings?

Of course, the premise of SURVIVNG JACK is that Jack finds a way to take over the household duties because he is a good husband and wants Joanne to have her life, and so he must grow and change to meet the needs of his new job. It isn’t easy for him, but we already see that he can do it, so the rest of his arc should be relatively predictable and not feature any more big jumps for him.

In general, I think the reason to watch SURVIVING JACK will be for the main family at the center. Meloni is always entertaining, and has solid chemistry with Harris, a wonderful actress with an extensive resume. The kids seem to do well enough in the parts, and whether viewers finds this foursome compelling enough will determine whether it can run past the initially-ordered eight-episode first season. For my part, I may watch, probably sometime in July after getting through most other regular season shows, but it’s certainly not at the top of my priorities list.