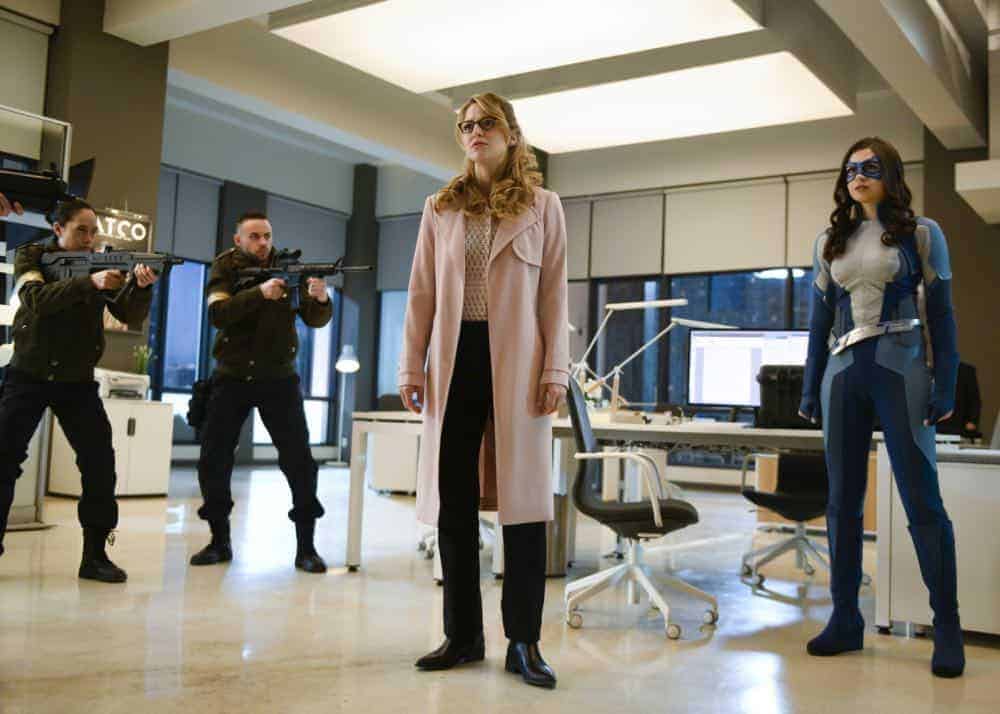 In this week’s new episode of SUPERGIRL entitled “American Dreamer,” lives are on the line and a few are caught in the crossfire. While trying to keep a low profile as Ben Lockwood’s (Sam Witwer) war on the aliens escalates, Kara Danvers (Melissa Benoit) finds herself at a crossroads: does she dare to don back on the Supergirl suit and fly the skies in pursuit of truth and justice, or can she find a better way to fight back against the oppressive tactics being used to target and incarcerate the aliens living in National City? With Nia (Nicole Maines) stepping up as Dreamer, there is still someone working to protect the aliens while Kara tries to determine where Lex Luther (Jon Cryer) has fled, and all roads lead to AmerTek.

With Dreamer stepping up to aid the aliens and Kara immersed in her pursuit of Lex, that leaves Lena Luther (Katie McGrath), Brainy (Jesse Rath), and Alex (Chyler Leigh) on their own to find a way to help James (Mehcad Brooks) who is still suffering from Harun-El side-effects. Fortunately, James’ sister Kelly (Azie Tesfai) is also on hand to lend a hand as James slips closer and closer to the brink.

With Lockwood and his government-sanctioned squad of goons, there is terror in the streets and no place is safe. Lockwood is hell-bent on tracking down every single alien in their midst by any lethal force necessary. This is a point of moral quandary for Lockwood’s son George (Graham Vershere), who wants to aid his father and make him proud, but is not so sure that what they are doing is right.

Kara likewise is hell-bent on hunting Lex and will not rest until there is no corner on Earth safe for him to hide. But whether with evil in their hearts or simply filled with good intentions, neither Kara or Lockwood can see too clearly in their parallel quests. It leads to those around them wondering if they are genuinely right, or just believe they are on the right side.

It seems impossible to think that Kara could ever be in the wrong, but it becomes evident that perhaps she may be going about getting what she wants the wrong way. As for Lockwood, his motivations and methods are to be questioned and those answers — along with the introspective look at Kara’s actions and methods — may not yield an answer that absolves them of their wrongful conduct.

As for Brainy, Alex and Lena’s quest to aid James, that too will lead to some darker moments and introspection. This episode certainly tugs at the heart-strings and does not take the easy path in the fight for anyone’s life.

Whether dealing with persecution, bulling or outright terrorizing the innocent, SUPERGIRL is steadfast in reminding everyone why it is so important to take a stand for those who cannot fight back or who do not always have a say in how they are perceived and judged.

True to the title of this episode, it is Dreamer who chooses to make that stand. She will be the brave one — an American Dreamer — who stands up to the bulling and persecution, and she will remind everyone why they all have more in common than they think, and shed light on why it is essential that they let go of their fear and distrust and find a way to embrace their commonalities and build a better world for all of them to live in together.

SUPERGIRL as a show never hesitates to illuminate the trouble of integrating aliens into a society entrenched with bigotry and hatred. Its fearlessness in tackling the tougher subjects, albeit through it’s wonderful and trusting lens of humanity, is admirable and laud-worthy. It seeks to remind us all that welcoming each other for our differences and appreciating what each has to offer to society as a whole is how we can move forward, how we can heal the wounds arising out of fear and ignorance, and how we will benefit by accepting everyone for who and what they are.

To see how all the SUPERGIRL heroes fare in their quests, be sure to tune in on Sunday, April 28th at 8:00 p.m. on the CW. This special episode is directed by the show’s own David Harewood, who usually portrays J’onn J’onzz. So if you are wondering where the Martian Manhunter is, he is behind the camera this week.