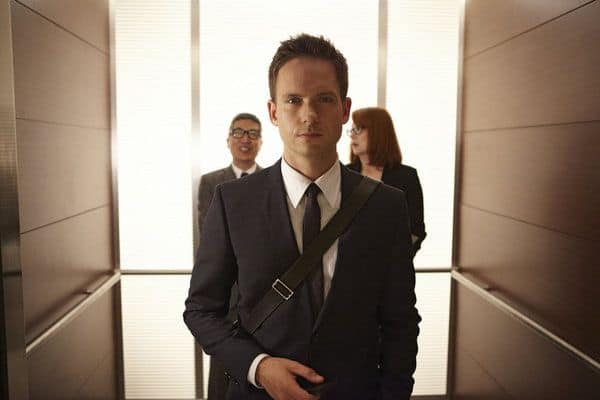 USA’s SUITS is back for a third season this week with “The Arrangement.” Taking place in the aftermath of last year’s finale, the employees at Pearson Darby (the firm’s new name) have to deal with broken trust and failing relationships. Everything is far from copacetic, or even status quo, as what has been shaken up has not yet begun to settle down.

The most painful split may be between the show’s two most central players from the beginning, Harvey (Gabriel Macht) and Mike (Patrick J. Adams). Mike having betrayed Harvey for Jessica (Gina Torres), he will do just about anything to win back Harvey’s trust. This is not helped at all when Jessica gifts Mike an office.

What’s scary is that there is no clear path to come back from this. Usually, either Mike or Harvey has a brilliant idea that can save the day. But Mike fails to come up with anything more spectacular than a little research, which isn’t all that impressive to Harvey, and Harvey doesn’t seem to want to try. If Harvey is swatting away all of Mike’s olive branches, is there a point in even sticking them out?

It’s good that this has shaken Mike to the core, though. Mike can sometimes be a little too overconfident, and somehow skates by when anyone else would fall. Losing Harvey as a mentor and friend should be a wakeup call to make sure he keeps himself in check. Mike is a good guy, for sure, but it will not hurt him to take a step back once in awhile and think more about those closest to him.

Similarly, the rift could end up helping Harvey if it teaches him to embrace forgiveness. Harvey tends to hold a grudge, as evidenced in the way he treats Louis (Rick Hoffman), and especially in how he is now at odds with Jessica. Harvey likes to sort people into ‘friends’ or ‘enemies,’ and when a person is put in one box or the other, it is very hard for them to get out again. Maybe through making up with Mike, which surely must happen eventually, Harvey will be a better man, one more willing to let past faults go, his own as well as others’.

It’s sad to see Harvey and Jessica against one another, as cool as it is to anticipate a battle between gods of the legal world. Their clash will be epic, and yet, it is emotionally painful that they are against one another. It’s a situation where they just need to agree to disagree, and Harvey needs to see Jessica as his boss, which is what she is. Unfortunately, they are both too headstrong for peace to be found. Unlike with Mike, Harvey’s reconciliation with Jessica is not assured, as her character frequently verges on the edge of antagonist.

These warring factions make it all the more easier for Darby (Conleth Hill, Game of Thrones) to establish control. He is the one in charge now, above Jessica even, and while he sometimes takes a seemingly relaxed approach in dealing with the lawyers, there is cold resolve in his eyes. He knows what he is doing, and because Jessica, Harvey, and Mike are in no place to unite and stand up to him, he is easily able to put them in the places that he wants them in. For now, anyway.

I don’t know why I jump straight into thinking Darby is a bad guy. He helps the firm out when they need it, and he hasn’t done anything untoward to the beloved main characters. Darby even grants Harvey a favor in “The Arrangement,” something he certainly does not have to do. Maybe it’s because I’m remembering the unpleasantness brought on by the previous partner, Hardman, or maybe it’s because we expect Harvey to always get his way on his own terms, and Darby will stand in the way of that, but there’s something that keeps Darby at arm’s length.

Perhaps the most surprising development in “The Arrangement” is Donna (Sarah Rafferty) turning on Mike. It shouldn’t be a shock, given Donna’s absolutely loyalty to Harvey, and the fact that, in essence, Mike betrays her, too, but I didn’t see this coming. Donna is previously Mike’s supporter, and the surest thing to convincing Harvey to give Mike a second chance. But if she wants to shut Mike out, Mike has an even steeper climb back into good graces.

Mike’s hope for fixing things with Donna are his compassionate heart, which Donna does notice, though maybe not this week, and his relationship with Donna’s friend, Rachel (Meghan Markle). I will not spoil where Mike and Rachel end up in their dance in the premiere, but suffice it to say, both their strong feelings for one another and Rachel’s extreme disappointment in Mike are major factors. Where they land could definitely mean something in how Mike and Donna interact going forward.

Other things that are great in this wonderful episode are the scene where Donna gently questions Harvey about his feelings for Scottie (Abigail Spencer), a guest appearance by a second Game Of Thrones alumni, and Louis engaging in a battle of wits with the scorned Nigel (Adam Godley). Best of all, none of these things are resolved in the first hour, so there’s a lot to anticipate in the coming run, and fantastic guest stars will recur.

What SUITS does well is to build large, character-driven arcs. It is not at all a procedural or typical lawyer show. It is about people who all do what they think is best, and sometimes there can be more than one right side to an issue. SUITS operates in shades of grey and in nuance, rather than broad strokes or permanent us versus them labels. “The Arrangement” takes what has built over the first two years and matures it into the next natural step. Very exciting.