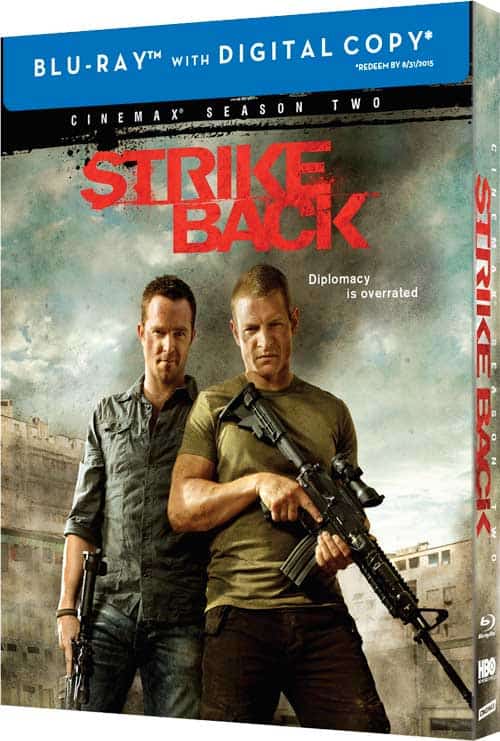 Seat42f and HBO Home Entertainment have teamed up to give TWO lucky winners a copy of STRIKE BACK Season 2 on BLURAY. For a chance to win leave a comment below telling us why you want to add STRIKE BACK Season 2 to your BLURAY collection. Only one entry per person. Contest ends August 7th. Winners will be notified on August 8th via email so make sure to use a valid email address when you post your comment.

“Fetch the popcorn, dude. It’s time for things to blow up” (New York Daily News), when Strike Back: Cinemax Season 2 hits the streets on August 6, 2013, just weeks before the highly-anticipated third season premiere on Cinemax. The Emmy® nominated series continues to follow the stealth counter-terrorism unit Section 20 and the unlikely alliance between two crack special agents – one an American renegade, the other an elite British  spy.  Featuring audio commentaries with cast members Philip Winchester, Sullivan Stapleton, Shane Taylor and Lyne Renee, and directors Michael Bassett and Julian Holmes, Strike Back: Cinemax Season 2 will be available on Blu-ray with Digital Copy ($49.99) and DVD ($39.98).

With world security storylines ripped from today’s headlines, the second season begins with Sgt. Damien Scott (Stapleton) on a standard security mission in Kenya and Section 20 facing a new boss, Rachel Dalton (Rhona Mitra). Now out of the unit, Sgt. Michael Stonebridge (Winchester) is training recruits at a military base, staying close to home and being a dutiful husband. When Scott’s mission takes an unexpected dangerous turn, the two are back together working to retrieve an elusive box of nuclear triggers coveted by everyone from Al Qaeda to the expatriate leader of a mercenary army.

Additional cast members include Rhashan Stone, Michelle Lukes, Vincent Regan, Liam Garrigan and Charles Dance.  Strike Back is a Cinemax Presentation in association with British Sky Broadcasting Limited, a continuation of the six-episode series that aired on Sky TV in 2010, which was based on the novels of Chris Ryan, the pen name of a real-life former British Special Forces operative.