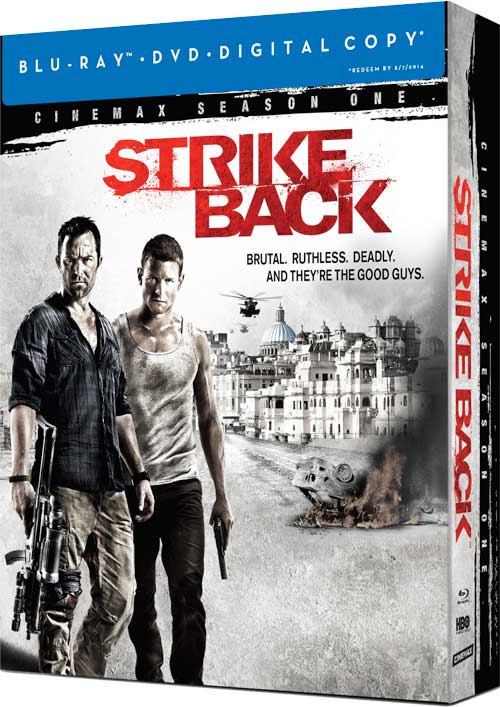 Strike Back: Cinemax Season 1, a timely and fast-paced series fueled by breakneck action and heart-pounding suspense, debuts on Blu-ray with Cinemax Select, DVD and Digital Download on August 7, 2012 for the suggested retail price of $59.96 and $49.98 respectively. Blu-ray with Cinemax Select, offers Strike Back Blu-ray buyers the choice ofthree ways to watch in one boxed set – Blu-ray, DVD and Digital Download – at no additional cost. The digital copy is redeemable via a provider of your choice: iTunes, Vudu, and Amazon, or an UltraViolet copy through supporting providers. Both the Blu-ray with Cinemax Select and the DVD box sets include audio commentaries from stars Philip Winchester, Sullivan Stapleton,Liam Cunningham, Amanda Mealing and executive producer Daniel Percival.

Strike Back, the first of several new,adrenaline-charged original dramas to premiere on the network, marked Cinemax’s best performance in its time slot in nearly six years. When a resourceful international terrorist group plots a major attack involving a cache of weapons of mass destruction, a charismatic former U.S. Special Forces operative joins forces with a stealth British military unit to stop them. Set in exotic locations such as India, South Africa, England and Chechnya, the series is headlined by two rising stars: Philip Winchester (Camelot) as Michael Stonebridge, a British sergeant on the elite counter-terrorism team; and Sullivan Stapleton (Animal Kingdom) as Damien Scott, a former U.S. Delta Force operative who was disgraced and discharged on the eve of the U.S. invasion of Iraq. Rounding out the international cast are Amanda Mealing (Holby City), Eve Birthistle (Silent Witness), Jimi Mistry (Blood Diamond) Rhashan Stone (Episodes) and Richard Armitage (The Hobbit).

Strike Back marks the first time HBO/CINEMAX has worked with the UK’s British Sky Broadcasting Limited to produce an original series. It is a continuation of the six-episode series that aired on Sky in 2010, which was based on the novels of Chris Ryan, the pen name of a real-life former British Special Forces operative.