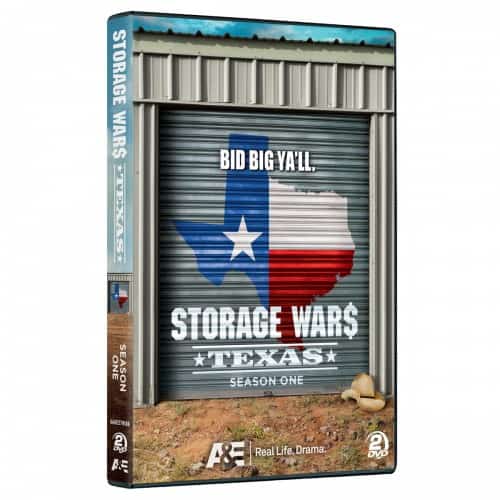 Seat42f and A&E have teamed up to give TWO lucky winners a copy of  STORAGE WARS : TEXAS Season 1 on DVD. For a chance to win leave a comment below telling us why you want to add STORAGE WARS : TEXAS Season 1 to your DVD collection. Only one entry per person. Contest ends December 14th. Winners will be notified on December 16th via email so make sure to use a valid email address when you post your comment.

In STORAGE WARS: TEXAS. A&E’s top-rated non-fiction franchise heads to the Lone Star state to follow teams of bidders on their quest for auction gold.  STORAGE WARS TEXAS: SEASON ONE arrives on DVD on November 20 with every episode from the first season, along with numerous bonus featurettes which take home audiences behind the scenes.

Following five Dallas-based storage unit hunters in their quest for auction treasures, the series introduceds a new crew of high bidding characters like self-employed Lesa Lewis, forever searching for items to sell at her brand-new Again and Again Resale thrift store.  Her pockets may not be deep, but she is a doggedly determined bidder when she sees a unit she wants. And, no job is too big for her right-hand man Jerry Simpson, who is always there to lend a hand and share a few laughs. Seasoned bidder Ricky Smith has been in the business since 14 and says he’s here to stay.  He’s also spent the past 20 years teaching the tricks of the trade to his nephew, Bubba, who now attends auctions with him.   New York native Victor Rjesnjansky moved to Dallas four years ago and now bids on storage auctions to fill the shelves of his two Texas stores.  And, teasing the crowd of high bidders is fast-talking auctioneer Walt Cade, who will do whatever it takes to move the units, offering each bidder a shot at that ever-elusive hidden treasure.