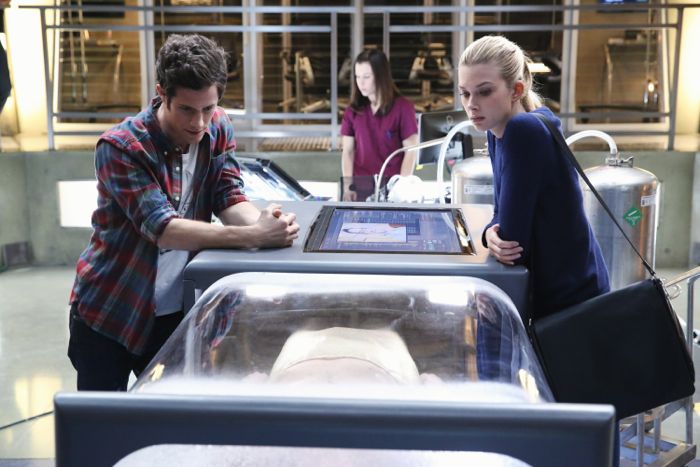 ABC Family’s newest show, STITCHERS, is a bit of a departure for them. A young woman with no awareness of time is recruited by a shady organization to be “stitched” into the memories of dead people to try to solve their murders or learn secrets that died with them. Surrounded by a group of intelligent geeks, the team is government-sanctioned, but deeply buried. Doesn’t sound like the typical, soapy fare for this channel, does it?

Yet, there is something so inherently familiar about Stitchers that I found myself googling the name to see if it was a remake of a program that aired a decade or two ago. I didn’t find anything, but perhaps these feelings come because the title is similar enough to Sliders, the basic structure of the cast is one oft-repeated in (not just sci-fi) procedurals, and the behavior and look of the lead character begs comparison to SyFy’s Continuum.

Despite the feeling that Stitchers may not be entirely original, I am enjoying it immensely, and not just because it exceeds my expectations of what this network can put out, being the best program they’ve aired since Kyle XY was canceled. The pacing is quick, the dialogue is fun, and while not going too deep, the performances are serviceable for the product. I can easily see myself watching this for at least a season.

STITCHERS stars former model Emma Ishta as Kirsten. Kirsten has trouble feeling emotions because she can’t tell when time is passing, giving no context to her life. This means she doesn’t know if she’s been in a room one minute, one hour, or one day, so she can’t make sense of how long she’s known a person. She is highly intelligent, so she uses math, logic, and clues to build herself frameworks of reference, but one is left wondering how she functions in society at all. Someone with any fewer brains could not.

Ishta is fantastic as Kirsten, though I don’t yet know if that’s because she’s a great actress or this role is just perfectly suited for her. She’s cold and hot at the same time, being stand-offish, but not unsympathetic, and stuffed into a skintight cat suit. To STITCHER’s credit, Kirsten doesn’t appreciate the get up and acknowledges this fact, even if her new team insist there’s a scientific reason behind it, poking fun at an old trope. Sexuality is present in this show, as it is in so many others, but it’s also part of the story, not just set dressing, which feels like a slight step up.

In the job, the boss is Maggie Baptiste (Salli Richardson-Whitfiel, Eureka), who is a very familiar type, being no-nonsense towards her team as she runs interference with the higher ups, straddling both worlds. Second in command seems to be Cameron Goodkin (Kyle Harris. The Carrie Diaries), who takes Kirsten under his wing. The head geek of those circling, mostly in the background, is Linus (Ritesh Rajan, The Last Airbender), who is a bit creepy in a lecherous sort of manner at the onset.

One could argue this ensemble echoes broadcast network procedurals, and there’s some truth to that. Comparing STITCHERS to say, Castle, Maggie is very much like Captain Gates, Cameron is a Beckett-type, and Linus is a combo of Ryan and Esposito, mostly Ryan, with Kirsten being the “out-there” type, even if she’s not much like Richard Castle on the surface.

What this means is, on paper, I shouldn’t like STITCHERS, as if you follow my reviews, I frequently complain about such repetitive formulas. Somehow, though, there’s a charm to this one, leaning heavily enough into its sci-fi genre to give it a pass, at least in the short-term. Should it be a total case-of-the-week, my love won’t last, but the story teed up for the second outing gives me hope that won’t be the case.

Also lending to its geek credit, STITCHERS has cast Allison Scagliotti as Kirsten’s roommate and classmate, Camille. It isn’t immediately apparent what role the Warehouse 13 star will serve in the show, but even if it’s just as someone to give Kirsten conflict at home, she works. My wish is that it will be more than that, Camille eventually stitched into the larger fabric. Yes, I know what I did there and I don’t apologize for it.

As you can probably tell, I like STITCHERS, and I recommend you give it a shot when it premieres this Tuesday at 9 p.m. ET on ABC Family. (The pilot is also already available to the public at: abcfamily.go.com/shows/stitchers)