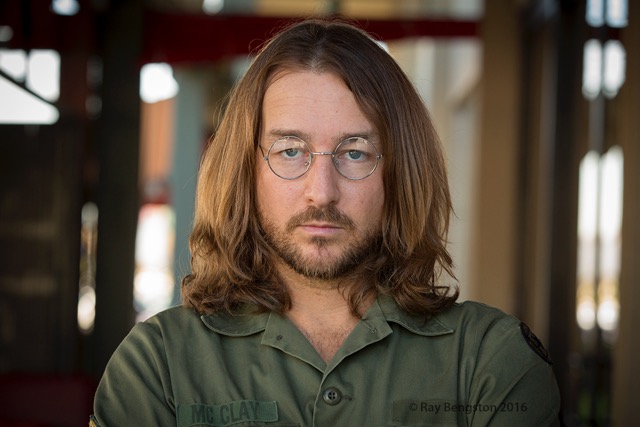 Vinyl fans were treated to a surprise in the most recent episode, “E.A.B.,” when John Lennon appeared in a scene at just the right moment to give Olivia Wilde’s Devon an opportunity to have a little fun after Richie humiliated her at work. A role as iconic as John Lennon takes a special actor who can commit to getting every detail of the character right, and for Vinyl that actor was the up and coming Stephen Sullivan.

Sullivan has landed some spectacular guest roles so far in his career, many of them playing into his old soul qualities. You definitely saw him as Clay in the Season 7 episode of Mad Men “The Monolith,” and the actor has also appeared in Manson’s Lost Girls, Longmire, and Rizzoli & Isles. While Sullivan is not a household name yet, the actor’s commitment to his craft and ability to disappear into his roles means it is only a matter of time before he has a major breakthrough moment and his transformative work as Lennon on Vinyl might just have been it.

Sullivan recently spoke with Seat42F about the work he did to prepare to play Lennon, why he loves Vinyl, and much more.

What did you do to prepare to play John Lennon?

Sullivan: It’s so funny because it is a dream role of mine, and it is the type of thing where I have kind of always had it in the back of my mind that I have sort of a similar resemblance to him, and one of the very first auditions I did out of theater school was to play John Lennon. The casting person involved told me this is a role you will play, but you are just too young right now, you have to age into it. I thought man, when is that opportunity ever going to happen?

When I first heard about Vinyl, I immediately felt a connection to the show. I love the time period and I love music. I personally have a huge vinyl collection I have inherited – OK, stolen – from my parents. When I heard about the show I told my manager I have to get on the show, and when she got back to me on who the audition for it would be for I was floored.

Once it came down officially, I worked with two dialect coaches. In addition to working with the dialect coaches I watched a lot of footage of John on YouTube, I found an interview with Tom Snyder that was recorded in 1975 and it is really detailed, so I watched that and tried to study as much of the cadence and rhythm and tone as I could because John had such a distinct voice and I wanted to make sure I got that right.

Lennon is such an iconic figure, but he gets to be very human on Vinyl. How did you feel about getting in touch with the human side of the character?

Sullivan: I think he is such an iconic figure that once I got into costume and they put the glasses on me, it immediately felt larger than life. Just walking from my trailer to the set and seeing people stopping and staring kind of gave me insight into what that must have felt like. Ultimately, I think he saw the ridiculousness of that and what is so cool about the scene in Vinyl is that he is so used to people constantly bombarding him and asking him for things that in this interaction with Devon, it is like she’s kind of tricking him, but he is also like this person is not trying to get something from me. Or if they are trying to get something from me, he sees it as it is clever, and if there is one thing about John it is that he was an amazingly clever, witty man and I think he respects the game she brings to him.

I think it is an interesting scene, there are always such larger than life qualities to John, but for him to just feel like a normal person in the club in this moment is really what makes him happy. That’s what ultimately I tried to do. He is just a person in this moment and he is just having a fun interaction with another person. It was fun to be John as John, just a dude in a club.

The 70s were an interesting time for Lennon. What part of his 70s experience informed your performance the most?

Sullivan: The series takes place in 1973 which is the time period that is referred to as John’s lost weekend. He split from Yoko and moved to Los Angeles, and I think the episode takes place right before that move was about to happen. In the episode, he is dating May Pang who was Yoko’s assistant that she set John up with. This mid ’70s time period was very tumultuous for John. In interviews of his, he has said he was really unhappy. He was drinking heavier than he ever had in his life, and he was not living healthy. You don’t think of the man who said give peace a chance being involved in fistfights, but that is what his life had become at this point.

If Lennon returns to Vinyl, maybe in Season 2, is there a character you would like to see him interact with?

Sullivan: First of all, I do hope that Lennon will be returning to Season 2, but I think it depends on what time period they move forward to. If it is going to stay within the timeline, or if it is going to jump ahead I don’t know yet. I think, just to put a nice little button on things, I would like to see the resolution with Yoko because I think that was such a big experience after 1973.

As far as interaction with a character on the show I would love to have the opportunity to meet Richie Finestra and work with Bobby Cannavale just because I think his work on the show is phenomenal. He really does an amazing job and carries the show. He has such vitality and energy. I think it would be kind of interesting to see John and him interact, and what they would have to say to each other. I think there could be some playful banter involved.

The party scene looked so moody and cool. What was the atmosphere like on set that day?

Sullivan: It was such an amazing experience. The wardrobe department and the people that do all these productions, they really do an amazing job. It didn’t feel like a set, it felt like we were actually in this club from the 1970s. Everything from the little chickpeas on the table which were a signature of Max’s Kansas City to the menus, everything was so authentic it felt like we were just stepping into this time machine. For me personally, I am such a music fan, so not only was it such an amazing experience to play an icon, a hero of mine John Lennon, but then to be able to be in a club watching a performance of Bob Marley and The Wailers is a bonus that will never happen again.

What do you think makes Vinyl such a unique show?

Sullivan: From Martin Scorsese’s involvement to Terence Winter’s writing to rock legend Mick Jagger, it has three major factors going for it right there. You put all of them together and you get this special show that I don’t think we have ever seen before on television. It is so unique to see these iconic figures brought to life each week while interweaving them with this fictional story. It is really fascinating to watch. Every single week you don’t know who you are going to see and even these little side performances are kind of giving insight into Richie’s mood. I think the music and the respect they have for the musicians is really what sells the show.

You were also in a significant episode of Mad Men’s final season. Do you feel drawn to period pieces?

Sullivan: In a way I do because I do feel such a calling to the ’60s and ’70s spirit. It’s just something I have always identified with. It’s where I have always felt a connection to. I was a huge fan of Mad Men, I watched it from the start and I always thought in the back of my mind there is no way a long haired hippie like me is ever going to get on the show unless they get to the late ’60s and there are hippies. When I got the call for that audition I knew it was meant to be, and then to be able to smoke a joint with Roger Sterling — I mean how cool is that?

I have been very fortunate in terms of being able to work on these incredible shows like Mad Men and Vinyl, and to do so with characters that I am so proud to have worked as. It is really an honor.

What is the best piece of acting advice you have received so far in your career?

Sullivan: As an actor it is so important to experience life and experience all facets of life so you can really use all of these experiences to pull for these different roles that you will have to perform someday. The dedication to the craft and continuing to learn and grow and experience life everyday is what has really helped me keep my passion and interest alive in pursuing this career.

Are you currently working on any projects you would like to talk about?

Sullivan: There is an independent feature film I worked on a couple of years ago, but it is finally starting to make its rounds in the festival circuit. I played a lead in it and it is a role I am very proud of. I’ve seen it and I think it is a beautiful film. It is called To Our Bright White Hearts and we are putting the feelers out there and we are hoping it will get involved in some festivals.

What is your favorite Martin Scorsese movie?

Sullivan: Taxi Driver is iconic and will always be… I think I would say Taxi Driver because that era of ’70s filmmaking was so provocative, and it was magical. Many films today have to kind of play it safe in terms of marketing and advertising, and it is all about the profits, but I think back then there was still a reckless abandonment to filmmaking and it was just art for the sake of art.