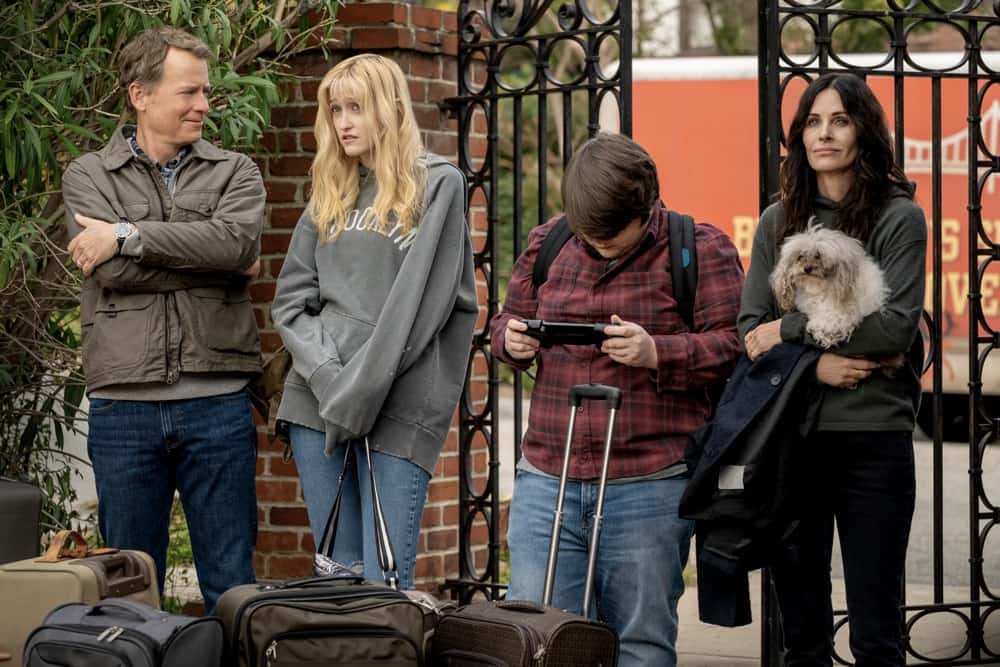 The chilling half-hour comedy from Jeff Astrof (“Trial & Error,” “Ground Floor,”) and Sharon Horgan (“Divorce,” “Catastrophe”) is the newest title from STARZ, which recently launched the #TakeTheLead initiative deepening the network’s existing commitment to narratives by, about and for women and underrepresented audiences.

“‘Shining Vale’ is a smart, chilling and funny series that tells the story of a family in turmoil who is suddenly living with a paranormal who helps Courteney Cox’s character get her groove back as she starts to question her own sanity,” said Christina Davis, STARZ President of Original Programming. “This group of talented actors, executive producers and director blends comedy and horror brilliantly throughout this series which exemplifies the network’s commitment to improve female representation on and off the screen.”

“Shining Vale” is a horror comedy about a dysfunctional family that moves from the city to a small town into a house in which terrible atrocities have taken place. But no one seems to notice except for Pat, who’s convinced she’s either depressed or possessed – turns out, the symptoms are exactly the same. Patricia “Pat” Phelps (Cox) is a former “wild child” who rose to fame by writing a raunchy, drug-and-alcohol-soaked women’s empowerment novel (a.k.a. lady porn). Fast forward 17 years later, Pat is clean and sober but totally unfulfilled. She still hasn’t written her second novel, she can’t remember the last time she had sex with her husband (Kinnear), and her teenage kids are at that stage where they want you dead.

She was a faithful wife until her one slip-up: she had a torrid affair with the hot, young handyman who came over to fix the sink while Terry was at work. In a last-ditch effort to save their marriage, she and Terry cash in all their savings and move the family move from the “crazy” of the city to a large, old house in the suburbs that has a storied past of its own. Everyone has their demons, but for Pat Phelps, they may be real.

Cox plays the lead role of Patricia “Pat” Phelps, with Kinnear playing her ever-optimistic husband, Terry Phelps, whose patience and self-control will be tested like never before. Sorvino plays Rosemary, who is either Pat’s alter ego, a split personality, her id, her muse, or a demon trying to possess her. Dungey plays Kam, Pat’s oldest friend and book editor. Gus Birney and Dylan Gage also star as Pat and Terry’s teenage kids, Gaynor and Jake.

“Shining Vale” is executive produced by Jeff Astrof from Other Shoe Productions, Sharon Horgan and Clelia Mountford (“Motherland,” “This Way Up,”) from Merman, Aaron Kaplan (“The Chi,” “The Neighborhood”) and Dana Honor (“A Million Little Things,” “The Unicorn”) from Kapital Entertainment. Courteney Cox is producer. Astrof wrote the pilot teleplay, from a story by Horgan & Astrof. The series is produced by Warner Bros. Television and Lionsgate Television in association with Other Shoe Productions, Merman and Kapital Entertainment.

“Shining Vale” will air on STARZ in the U.S. and Canada and on its international streaming platform Starzplay across Europe, Latin America and Japan.

ABOUT STARZ
STARZ (www.starz.com), a Lionsgate company, is a leading global media streaming platform committed to delivering premium content that amplifies narratives by, about and for women and underrepresented audiences. STARZ is home to the highly-rated and first-of-its-kind STARZ app that offers the ability to stream or download STARZ premium content, as well as the flagship domestic STARZ® service, including STARZ ENCORE, 17 premium pay TV channels, and the associated on-demand and online services. In 2018, STARZ launched its STARZPLAY international premium streaming platform to provide subscribers access to the “best of global SVOD.” STARZPLAY, coupled with its STARZPLAY ARABIA joint venture, has expanded its global footprint into more than 55 countries throughout Europe and Latin America along with Canada, Japan, India and Indonesia.

STARZ and STARZPLAY are available across digital OTT platforms and multichannel video distributors, including cable operators, satellite television providers, and telecommunications companies around the world. In February 2021, STARZ launched #TakeTheLead, a multi-faceted and innovative inclusion initiative expanding its existing efforts to improve representation on screen, behind the camera and throughout the company.

ABOUT WARNER BROS. TELEVISION
One of the entertainment industry’s most-respected providers of original primetime programming since its founding in 1955, Warner Bros. Television produces original scripted drama and comedy series for multiple platforms. As of April 2021, Warner Bros. Television is producing more than 70 scripted series for on-demand/streaming services, premium/pay and basic cable channels, and the five broadcast networks.

ABOUT LIONSGATE
Combining the STARZ premium global subscription platform with world-class motion picture and television studio operations, Lionsgate (NYSE: LGF.A, LGF.B) brings a unique and varied portfolio of entertainment to consumers around the world.  Its film, television, subscription and location-based entertainment businesses are backed by a 17,000-title library and the largest collection of film and television franchises in the independent media space. A digital age company driven by its entrepreneurial culture and commitment to innovation, the Lionsgate brand is synonymous with bold, original, relatable entertainment for the audiences it serves worldwide.