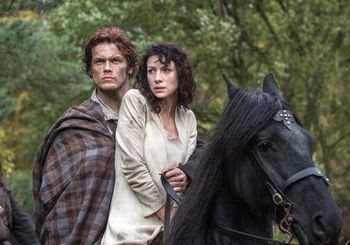 ABOUT:
“Outlander” 1B Series Synopsis:
“Outlander” spans the genres of romance, science fiction, history and adventure as it follows Claire Randall, a married WWII combat nurse who mistakenly falls back in time to 1743. As the season continues, Claire and Jamie’s relationship is tested and Claire must reconcile her modern mindset with this 18th century world. Ruthless redcoats, volatile clan politics, and a brutal witch trial force Jamie and Claire to escape to a new home. Just when their life as a married couple begins to take shape, Jamie is once again drawn into Captain Randall’s darkness. Ultimately, Claire discovers there is a fate worse than death as she struggles to save Jamie’s heart, as well as his soul.

“Ash vs Evil Dead”:
“Ash vs Evil Dead,” which is currently in production in New Zealand, is the long-awaited follow-up to the classic horror film franchise The Evil Dead and is set to premiere on STARZ in Fall 2015. The 10-episode first season of the half-hour series is executive produced by Sam Raimi, Rob Tapert, Bruce Campbell, the original filmmakers of the franchise, and Craig DiGregorio who will serve as executive producer and showrunner.