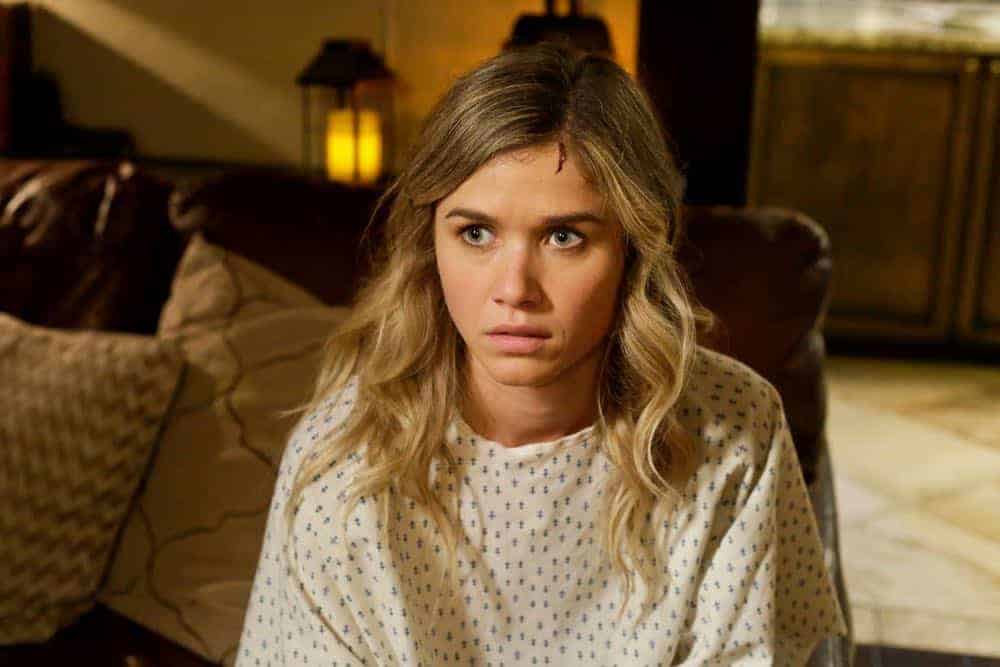 Getting a chance to shine in the starring role of the Lifetime film “Stalked andy My Doctor: Patient’s Revenge,” Anna Marie Dobbins offers an empowering portrayal of a young woman who stands up for herself. Tenacity and self-determination are qualities that Anna Marie has in abundance and it was a natural first for her to embody this role and demonstrate that women will take stand against stalking and fight for themselves when they have to. In an exclusive interview, Anna Marie talks about the fun she had working on “Stalked By My Doctor: Patient’s Revenge” and reflects on a few lessons she has learned as she pursues her career.

What was the initial appeal for you about portraying Melissa and working on Lifetime’s “Stalked By My Doctor: Patient’s Revenge”?
ANNA MARIE: I loved the role and script. I was able to have fun with Melissa’s character as she has some fun twists and turns in the movie that allowed me to dive into some fun opportunities to take her character to the next level.

How would you describe who Melissa is in the film?
ANNA MARIE: She is a good student, friend, and daughter who has a loyal heart. Melissa wants to do what’s right and sticks up for her friends and/or teachers. She is your All-American girl who works hard to achieve her goals pushing beyond extremes for what she feels is right even if it is taking justice in her own hands.

What do you most admire about her?
ANNA MARIE: Her loyalty and motivation to do what’s right and she’s not scared of a little fight. She has courage and a backbone!

What is it like working alongside Eric Roberts and Brianna Joy Chomer on “Stalked By My Doctor: Patient’s Revenge”?
ANNA MARIE: They are both a joy. I was able to have many one on one experiences with both of them. The first-time meeting Eric was in dance rehearsal. This was great for me, as I have a dance background and he does not, this put us on the same playing field for a moment. I was able to help him with the dancing and he helped me with tough scenes in the movie. Eric is the sets jokester, he was always making everyone laugh and pulling fun pranks. You can definitely tell that he loves his job! His wealth of knowledge and his vast experiences just made the entire project worthwhile. I learned so much from him. Brianna and I clicked ever since the first day. We had so much fun hanging out around set, as well as our epic fights scenes throughout the film. As soon as “cut” was called, we would start laughing and cracking up. We are still good friends and keep in contact with each other.

Any favorite scenes that you can share from working on the film?
ANNA MARIE: One of my favorite scenes was the dance dream sequence. I was able to show another side of me besides just acting. We shot it at the beautiful Griffith Park at sunset. It was just magical.

What challenges did you face working on the film and how did you overcome them?
ANNA MARIE: One challenge was learning all the stage combat. I have never done any fight scenes or my own stunts before. So, learning how to throw a mean right hook or knock someone out with a rifle was so much fun! One of the first days on set, we were staging one of Sophie and I’s epic fight scenes. There was some miscommunication and mid fight scene I turn to run for a knife and BOOM, I knock myself out with the camera. Ha ha. I thought I was for sure fired, as this camera is probably worth more than my life. The cast and crew have yet to let me live that down. They proceeded the next day by bringing me Band-Aids, Neosporin, and flowers. So embarrassing!

Has “Stalked By My Doctor: Patient’s Revenge” left an impression on you in your life? If so, in what way?
ANNA MARIE: Yes, absolutely. I am very grateful to have worked with someone so Iconic as Eric and to have a director like Doug Campbell, who really understands his actors. He helped me get to the place and mindset I needed for each scene. They are wonderful. Also, the fans of this series are amazing. They are die hard Dr. Beck fans and I love being a part of the “Stalked by my Doctor” fan family. It’s a special feeling when the fans get so excited about the movie.

What has surprised you most about your career so far?
ANNA MARIE: Everything in this industry is a surprise. You go day to day not always knowing what the future holds and when surprises come (bookings) they are the best feelings. To know you have worked so long and hard to achieve a goal and to see yourself actually doing it, its surreal.

At this stage of your career, what do you think you have learned from the roles and projects you have worked on?
ANNA MARIE: Never stop learning and developing as an actor. There is never an ending to your growth. Each project I learn more and more and have the opportunity to be around amazing cast and crew that push me to the next level. I am so blessed to have been able to work with so many amazing people and learn from them. The stories are endless.

Then what are the perks of where you are in your career right now?
ANNA MARIE: These projects give me a platform to be able to give back. I love being involved in different charities and organizations to bring good back to the world. Also, I am at the perfect stage in my career to really show my diversity in my acting and keep pushing boundaries. Bring it on!

Has there been any great advice you have gotten about working as an actor?
ANNA MARIE: Casting Director and Teacher Mark Teschner once told me “When you feel nervous, put all your energy and nerves onto your scene partner. Use the energy to move your scene forward”. This has always stuck with me and I use this every time I am feeling nervous, whether that be on set, audition room, or even class.

What advice would you offer to other upcoming and aspiring actors?
ANNA MARIE: Motivation and Persistence are key. Don’t give up on your dream despite your age, how many years you have worked for it, rejections, etc. The ones who make it in this industry never gave up. Do it because you love it and that will give you all the motivation you need.

At a time when women’s voices are rising to be heard and respected around the country and world, what do you recommend your fans do to lend support in that endeavor?
ANNA MARIE: Don’t be afraid to speak up. Your voice and story are powerful. Never let being a victim overpower your will to make a change, and if you can’t tell your own story, go to someone who will. There are many wonderful, strong, powerful women who will fight for you.

Do you have any other upcoming projects that you can share that fans should keep an eye out for?
ANNA MARIE: I do have a couple projects in the works. Both projects I can’t release any information about yet but stay tuned! Fun and exciting things ahead!

“Stalked By My Doctor: Patient’s Revenge” airs throughout this summer on Lifetime. For additional information about the show, you can follow Lifetime on Twitter @LifetimeTV or visit the Lifetime website: https://www.mylifetime.com/movies/stalked-by-my-doctor-patients-revenge. Then to keep up with Anna as her career continues and grows, you can follow her on Twitter @amdobbins91