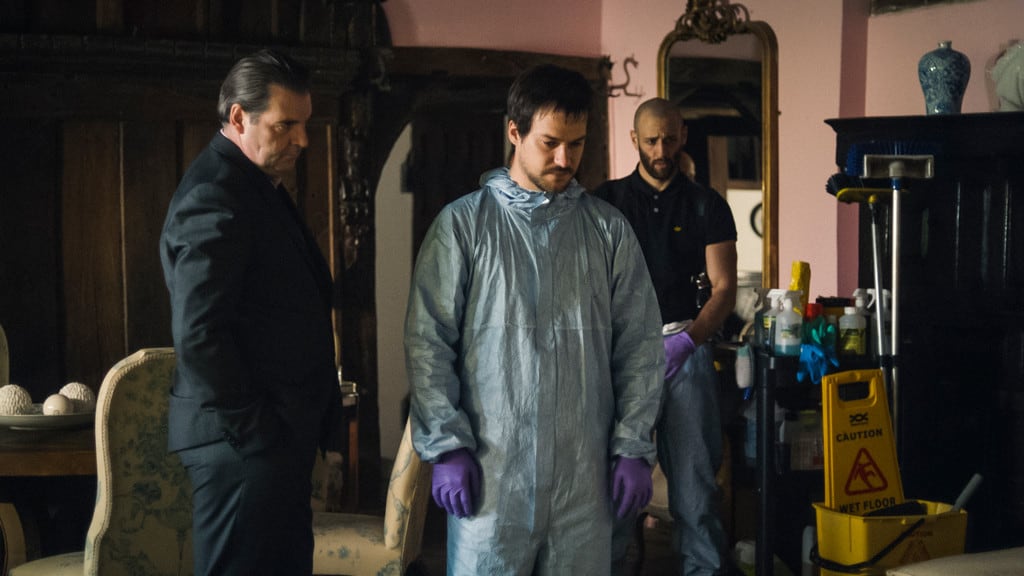 Esquire is the latest cable network to get into the scripted game, premiering its first original series tonight, SPOTLESS. A Franco-British import, SPOTLESS aired in France last March, and now comes to American television exclusively on Esquire. Honestly, my viewing habits being skewed almost entirely to scripted programming, I am not familiar with Esquire’s slate or how it might fit their audience. But this is a quality show that would be right at home on BBC America, Sundance, or A&E. If that’s the direction Esquire is going in, I’ll be paying more attention to it from now on.

SPOTLESS is a tale of two brothers who went through a traumatic event in childhood, and now, coming together for the first time as adults, find they have very different ways of dealing with things. Jean Bastiere (Marc-Andrew Grondin, C.R.A.Z.Y.) has a wife and two young girls, owning his own business cleaning crime scenes and building a respectable life in London. He struggles financially, ever since the recession, but he has tried to put the past behind him and move on mostly honestly. By contrast, Martin Bastiere (Denis Menochet, Inglourious Basterds) has sunk deeper into the mire, conducting himself as a criminal. Now, their lives have become messily intertwined.

I find Jean a very interesting protagonist because he’s not exactly what one would expect. Usually, the hero is either noble, with a strong moral compass, or is deeply flawed, highly skilled, but not going at using those skills around other people. Jean falls in the middle. He presents himself as an upstanding man, and resists going afoul of the law when mobster Nelson Clay (Brendan Coyle, Downton Abbey) tries to recruit him. Yet, he seems to have little problem cheating on his wife with Claire Wiseman (Tanya Fear, Kick-Ass 2), nor keeping secrets.

Jean also loves Martin. Despite the years they’ve spent apart and the disaster Martin thrusts upon him, there is a bond of love and affection that Jean honors. They went through something together long ago, and it has made their relationship unshakeable, no matter what. For someone going for the life Jean keeps as his public front, one might expect Jean to shun Martin. In SPOTLESS, he does the opposite, which feels strangely authentic, even as viewers may question why Jean would do so.

It’s this complexity that makes SPOTLESS intriguing to me. I can’t easily pin down exactly who Jean is (Martin and Nelson are quite a bit easier to do so), but he seems like a mostly good man, not just a television character archetype.

I’m not sure where the story is going, either. SPOTLESS doesn’t confine itself to Jean’s perspective, but allows individual plots for Martin and Jean’s wife, Julie Greer-Bastiere (Miranda Raison, MI-5), that have nothing to do with Jean. And the paths they go down aren’t what one might expect, especially Martin’s story in the second episode, which feels totally in-character for Martin, but diverges far enough away from the central core that it feels like another narrative entirely. Which is another positive, since most people’s lives aren’t solely focused on one thing for very long.

SPOTLESS is a dark dramedy. Its hour-long episodes contain adult content, including violence and censored nudity and cursing (which probably aired in their full version overseas, but unfortunately we don’t get that on U.S. basic cable). However, it also is humorous in some of the crazy stuff that happens, with bold dialogue and over-the-top danger. Now, none of this is off-the-rails enough to detract from how genuine the program feels, but it does make the material lighter than it seems at first glance, another plus.

I recommend checking out SPOTLESS. It airs Saturdays at 10 p.m. on Esquire.