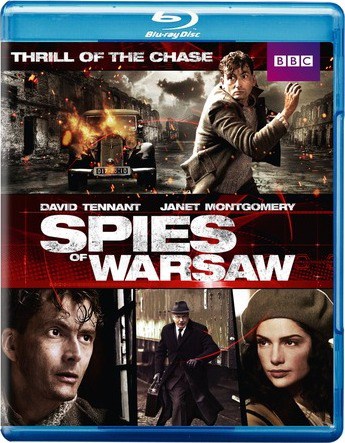 Seat42f and BBC Home Entertainment have teamed up to give THREE lucky winners a copy of SPIES OF WARSAW on BLURAY. For a chance to win leave a comment below telling us why you want to add SPIES OF WARSAW to your BLURAY collection. Only one entry per person. Contest ends April 30th. Winners will be notified on May 1st via email so make sure to use a valid email address when you post your comment.

At the French embassy in Warsaw, the new military attaché, Colonel Jean-Francois Mercier (Tennant), a decorated hero of the 1914 war, is drawn into a world of abduction, betrayal and intrigue in the diplomatic salons and back alleys of the city. At the same time, the handsome aristocrat finds himself in a passionate love affair with Anna (Montgomery), a Parisian lawyer for the League of Nations. Risking his life, Mercier works in the shadows amid a remarkable cast of characters, some known to him as spies, some never to be revealed. It is a city where people drink and fight and spy and love, because no one knows what tomorrow will bring.