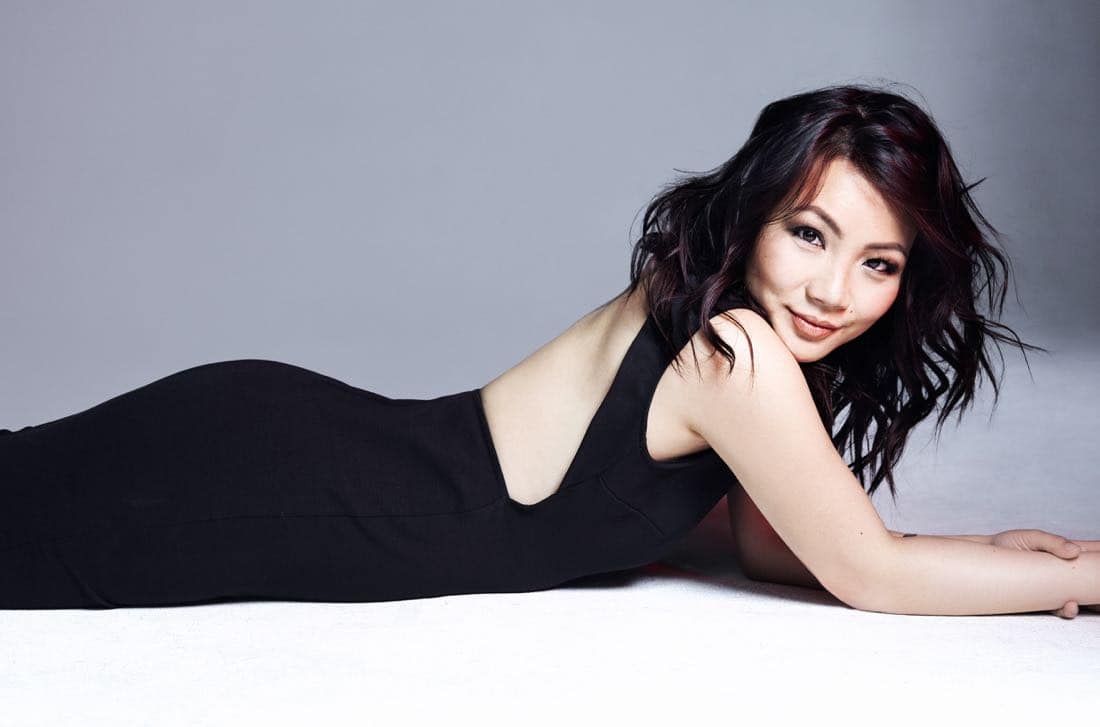 Igniting the big screen as well as small screen is upcoming actress Jona Xiao, most recently seen on television in BET’s BEING MARY JANE and AMC’s HALT AND CATCH FIRE, who has two new films out this year: “Gifted” and “Spider-Man: Homecoming.”  Deftly straddling both worlds, Jona is one of Hollywood’s hottest young actresses to keep an eye on.  In an exclude interview, Jona previews her secretive role in “Spider-Man: Homecoming” and talks about what she has learned as her career opportunities heat up right now.

What initially appealed to you about working on “Spider-Man: Homecoming”?
JONA:  Having grown up a huge lover of superhero films and TV shows and even using my birthday wishes from ages 7 to 12 to wish for superpowers, I was excited to work on my first Marvel project.  Also, I loved Tom Holland’s snarky, youthful take on Spider-Man in “Captain America: Civil War.”  Also, the cast and crew on the project was phenomenal, so I always love working with great collaborators.

How would you describe who your character is?
JONA:  I cannot reveal much about who I play, but I can say that one of the actors I got to work with was Marisa Tomei and she actually helped cast me in my role.

What do you most admire and/or like about her?
JONA:  My character feels very deeply and isn’t scared to show how she feels.

What is it like working alongside such a talented ensemble, including Robert Downey Jr., Tom Holland, Logan Marshall Green, and Marisa Tomei?
JONA:  One thing I can share is that Marisa Tomei helped cast me in my role and she was actually very complimentary of my performance and since she’s been an actress that I’ve had so much respect for, it meant so much coming from her.  Despite her incredible success, she’s very grounded and humble as a person.

What has been your favorite part about working on this film?
JONA:  Getting to work with the phenomenal cast and crew.

What has been the one thing you as an actor haven taken away from working on “Spider-Man: Homecoming”?
JONA:  A few things: (1) To trust my instincts and have the freedom to continue co-creating my character with the director.  The approach I took in the audition process was changed quite a bit when I was on set, so the importance of flexibility and co-collaboration.  (2) That I would love to continue being a part of the Marvel Universe.

What do you hope viewers to take away from watching “Spider-Man: Homecoming”?
JONA:  I hope the audience takes away some perspective as it’s very easy to get caught up in the challenges we face as people, but some of those challenges pale in comparison to what’s happening in the world at large.  I was originally “Made in China,” but I grew up and am a citizen now of the U.S. and I think it’s so important for us as people to see ourselves as world citizens.   You also recently costarred in the film “Gifted” as Lijuan.

What was that experience like for you?
JONA:  I’m so proud to be part of this beautiful story.  The story revolves around a single father (Evans) who is raising a 7 year old (Grace) who we quickly realize has an insanely brilliant way with math and is a prodigy.  I play a smart college student named Lijuan and play a role in revealing how much of a child prodigy Mckenna Grace’s character is.  I got to work with one of my favorite directors, Marc Webb (and I fell in love with his filmmaking when he made 500 Days of Summer, the film that helped me recover after my boyfriend at the time cheated on me).

What were your favorite moments from working on “Gifted”?
JONA:  One of my favorite moments was working with McKenna Grace and joking around with her. She’s so precocious and packs a punch for being so young.

What was your reaction when you found out that you got the roles in both “Gifted” and “Spider-Man: Homecoming”?
JONA:  There was definitely a mix of screaming, jumping up and down, and probably scaring my neighbors, (laughs). With “Spider-Man” I wasn’t allowed to even share that I was involved in the project at that point so when I was sharing with close friends and family, I had to be very cryptic and non-specific when talking about the project. They tried to play a lot of guessing games with me and I just had to get good at changing the subject.

What has surprised you most about your career so far?
JONA:  That I’m booking as many dramas as I am!  My niche has always been more in the comedy world (because I feel very comfortable with physical comedy, the timing, etc.).  But, I’ve been exercising my drama muscle more and more and it’s really fun to get to play in both worlds.

At this stage of your career, what do you think you have learned from the amazing variety of roles and projects you have worked on?
JONA:  For actors, work generally comes in waves and while you are on that wave, really enjoy the ride. I’m a recovering perfectionist and no matter what I achieved it never felt “good enough.”  I’ve learned to really focus on what I have rather than only focusing on what’s missing or what’s still left to accomplish. That’s taken some of the pressure off of “always have to book work” and opens me up to having much more fun in this crazy business that is show business.

If there were one role you would like to revisit, which would it be and why?
JONA:  Julie Yang in HALT AND CATCH FIRE. Man, she was so ballsy, held her own on a team of all men, and was pretty shameless.  I would throw out ridiculous insults when I felt attacked by guys on my team by saying thing like “F you semen.”  I loved how bold and unapologetically she was as a person and a champion for women.

You seem to take on roles that are very challenging. Do any of your characters and the situations they find themselves in ever leave a lasting impression on you?
JONA:  There’s been entertaining parallels for sure.  For instance, the guy that I’m sleeping with (Aaron) in BEING MARY JANE, I find out is actually sleeping with another co-worker.  Having been cheated on in my life and finding out also in a very unexpected way (accidentally, and I do stress accidentally reading the confession in the journal of the guy I was dating at the time), shooting those scenes hit home and I was able to connect quickly to the feelings of anger and betrayal.   Also, I think it comes down to having clear, consistent communication with someone that you are romantically involved in as there’s usually a breakdown that precedes someone cheating.  It’s usually a result and not the catalyst.

Has there been any great advice you have gotten?  What advice would you offer to other upcoming and aspiring actors?
JONA:  One of my teachers, years ago, saw that I was trying to juggle different potential career paths (I was pursuing acting, an online dating startup company, management consulting, professional poker player, etc.) and told me to “put all my eggs in one basket.” This really resonated with me because what I realized was I was doing all these different things because I was so afraid of failing so by trying different paths, I figured I had a better chance of succeeding at least one of them.  But the opposite was true, I wasn’t truly investing effort into what I cared about the most.  Since cutting out a lot of other potential career paths, I’ve been able to focus more on what matters the most and see results in my career much faster.   For aspiring actors, I would recommend using what I call the “The ABC Guaranteed Formula for Success.”  A = A-Game Mentality (staying persistent, not taking “rejection” personally, treating this business as a marathon and not a sprint).  B = Business know-how (understanding how to market yourself, how to partner with the right team to help you accelerate, networking, etc. that gets you the acting opportunities).  C = Craft (your training + talent).  I firmly believe that anyone can be successful in the industry if they master all parts of this formula because in my eyes A + B + C = Guaranteed Success. For half of my childhood, I grew up in a trailer park in a tiny city in upstate New York. I was clueless about the business side of the industry, was scammed at age 12 and acting for me was an expensive hobby for so long.  I really focused on the A, B, and C and that’s made all the difference to me.  If there’s something you want that you don’t have, it just means there’s something you don’t know.  If I can do it, you can do it.  If she can do it or he can do it, so can you.  You have all the resources in side of yourself you need to succeed, sometimes the access is just cut off and it’s okay to ask for help and support.  Successful people do it themselves but never alone.

At a time when women’s voices are rising to be heard and respected around the country and world, what do you recommend your fans do to lend support in that endeavor?
JONA:  When dealing with people who do not share the same values or do not see eye-to-eye with you, the temptation is to be spiteful and angry and lash out.  As with any disagreement, this approach rarely works and I always believe in leading by example.  We can practice empathy without agreeing or condoning what someone is doing or what we see as a twisted perspective.  Also, I’d recommend getting involved in local and broader politics as well to help make your voice heard.

Do you have any other upcoming projects that you can share that fans should keep an eye out for?
JONA:  “Gifted” is in theaters currently so I encourage anyone who wants to see an uplifting, heartfelt, funny film to go see it with their families.  I cannot discuss anything else at this point.

To see what mysterious character Jona portrays in “Spider-Man: Homecoming” be sure to watch for the release of the film scheduled to premiere on Friday,  July 7th in the U.S.  Then definitely check out her performance in the film “Gifted,” currently available in theaters.  To find out more about Jona’s upcoming projects, be sure to follow her on social media at: