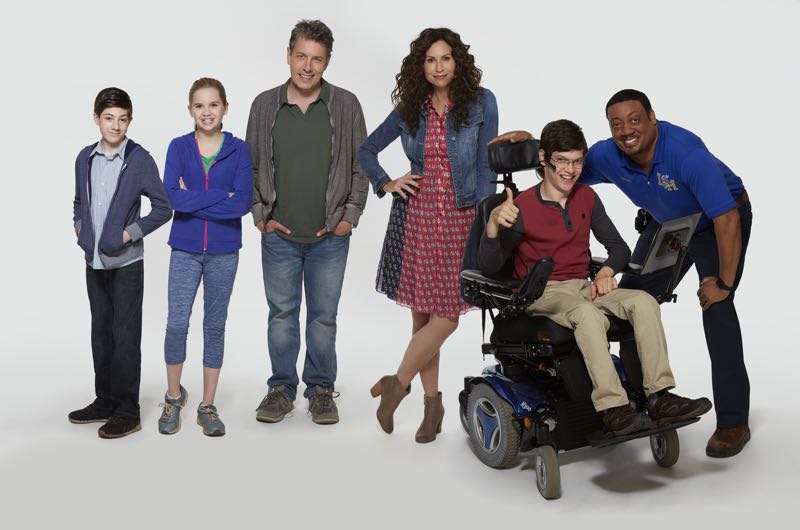 SPEECHLESS is a new sitcom on ABC that you may have heard of. As the previews make very clear, this is your typical family sitcom with a mom, dad, three kids, and one outside cast member to mix things up. As you may not have heard, there’s something about the show that makes it not quite your typical family sitcom, and yet, the very way in which this something is handled is what makes it so typical.

The family unit is made up of an overbearing mother, Maya (Minnie Driver, About a Boy, Good Will Hunting), a calm and supportive father, Jimmy (John Ross Bowie, The Big Bang Theory), a competitive daughter, Dylan (Kyla Kenedy, The Walking Dead), and a nerdy son, Ray (Mason Cook, Legends). Sounds normal enough, right?

Where things veer off a little bit is with the other son, JJ (Micah Fowler, Labor Day), who happens to have severe cerebral palsy. We’re talking a condition so bad that the poor kid can’t talk, having to use a laser pointer on a headset to point to the words on a card that he wants to say, on his way towards Stephen Hawking territory. I can’t recall the last time we’ve seen someone like JJ on a broadcast network sitcom.

What’s remarkable and laudable about SPEECHLESS is how little a deal it makes of JJ. Yes, JJ is a driving plot point, the family having to move schools frequently in order to find the best situation for him. And Ray’s first arc is all about feeling overlooked by Maya, who spends so much of her energy doing what is best for JJ. But this is by no means the only thing going on in SPEECHLESS.

The best part is how JJ himself is handled. He bullies Ray a little bit. Jimmy cracks jokes at JJ’s expense. Basically, he’s a part of the family, and no one in this clan treats him any differently on a regular basis. Sure, Maya might go out and fight harder for him, but in their dynamic, JJ is just like Ray and Dylan.

This should not be a revelation; shows have been trying to include more diversity for years. From Parenthood’s Max, who had Asperger’s (though the actor does not), to Glee’s Becky, who had Down Syndrome (which the actress does have), it’s not a completely brand-new thing to see this sort of character on television. And yet, it still feels fresh because so few regular series take the time to include a player with such challenging disabilities who contributes to the story in such a pedestrian way. This is a very good thing.

If JJ was all SPEECHLESS had going for it, I’d dismiss JJ as a gimmick, as sad as that would be. Thankfully, that is not the case. It’s a strongly written, well-acted comedy. Driver and Bowie are absolutely terrific, as they always are, but especially so in this particular setting. Cook, Fowler, and Kenedy are great, too, certainly able to keep up with the adults. Cedric Yarbrough (Reno 911!) rounds out the cast as Kenneth, the custodian-turned-aide for JJ, who easily integrates into the group from the first moment we, and the characters, meet him.

I’m sure the team behind SPEECHLESS doesn’t want to be known as “that family comedy with the cerebral palsy kid,” or at least I hope they don’t. They won’t be able to help that for awhile, and it’s impossible to write up an initial review without dwelling on it. But given the steady quality and amusing laughs, nudging it towards the top of the typical family sitcom heap (of which there are a few too many on right now), hopefully it’ll soon be talked about as “one of the better family sitcoms” period. It deserves that, and I love that I can say that about it. This would be a very different review if I could not.

As Joss Whedon said when asked why he writes so many strong female characters, “because you ask that question,” SPEECHLESS helps us along the path to answering a question about why you include an actor with a disability in the ensemble with “because you ask that question.” The more comfortable viewers can get with a wide variety of people on their screens, the better for it we all are.