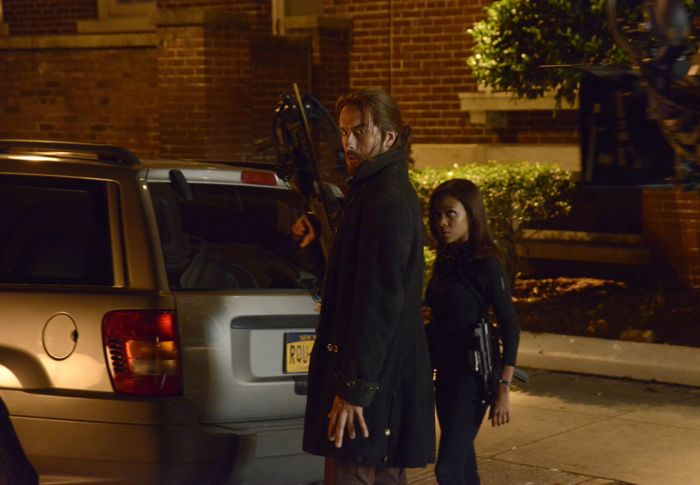 SPOILER ALERT! The following contains some spoilers, though not too much, about the upcoming season premiere. You have been warned.

FOX’s SLEEPY HOLLOW returns for its sophomore run this week with “This Is War.” Picking up a year after the events of last winter’s shocking cliffhanger, Ichabod (Tom Mison) and Abbie (Nicole Beharie) have been reunited, but they have both lost someone they loved. It’s a bittersweet pause in their war as they enjoy one another’s company before setting off on their next mission, which involves hunting down a lost key once tied to a kite by Benjamin Franklin (Timothy Busfield, The West Wing).

On one hand, “This Is War” starts off exactly how fans want it to. The bond between Ichabod and Abbie is a central element to the series, and it’s satisfying to see they both have made it out of the prisons we last view them in, Ichabod buried under the ground and Abbie in purgatory, rather than still being separated. Even learning that a couple of important characters have died in the interim is overshadowed by the image of the pair still fighting the good fight against Ichabod’s son, Henry Parrish (John Noble), and the other Horsemen.

On the other hand, though, I felt completely off balance by the start. Many people’s lives are left hanging when last SLEEPY HOLLOW aired, and it’s disconcerting to not get resolution to those threads, or learn how the main characters managed to escape their dire circumstances. It almost seems like an episode is missing, or like you skipped a stair going up to a second floor and stumbled.

Which is why, having watched as much television as I have, I was highly suspicious. It wasn’t until ten or fifteen minutes had passed before I could really settle into the story and accept the time jump had happened. I kept expecting the whole thing to be a dream or something. What eventually did make me change my mind was that the characters are so compelling and the story is written so tightly, that I just got sucked into what was going on, forgetting about lingering concerns to a certain extent.

I love SLEEPY HOLLOW, and this season premiere lives up expectations. It is smart, quick, and plenty full of action. We do eventually get to see Abbie and Ichabod escape their confinement, as they must, and while I cannot spoil the twist that shows up a little past a third of the way through, I can say the show does a good job of throwing even those who might suspect the truth early on off track enough that when the tale suddenly changes, it’s still a surprise.

The characters remain the best reason to watch. There is a truly earned fist bump in “This Is War.” We see some of the depths of Henry’s rottenness. A character known to be dead comes back for a moving scene that may be their last appearance, given other professional commitments. Abbie gets a chance to show just how perceptive she is. We see the strength of Jenny (Lyndie Greenwood). One main player is still MIA, but he’ll probably show up next week, and there’s plenty of other things happening so he isn’t missed yet. All of these combine to make a heck of a season premiere.

For those more concerned with the larger arcs, which I agree are very important, too, “This Is War” serves that. There is no doubt that the events depicted in season one are only the beginning of Molok’s (Derek Mears) plans. He has not slowed down in his quest, and things only get more dangerous for our heroes, if that’s possible. SLEEPY HOLLOW has definite direction and it is plunging forward, full speed ahead, on that path.

There are also glimmers of humor. Ichabod’s hatred for our founding father, Mr. Franklin, is not only justified, but amusing. SLEEPY HOLLOW is mostly a dark show, so to get those bits of light snuck in between bloodthirsty armies of demons is welcome.

I will be covering SLEEPY HOLLOW weekly for Seat42F this year, so join me again next week after watching the show, which airs Mondays at 9 p.m. ET on FOX.