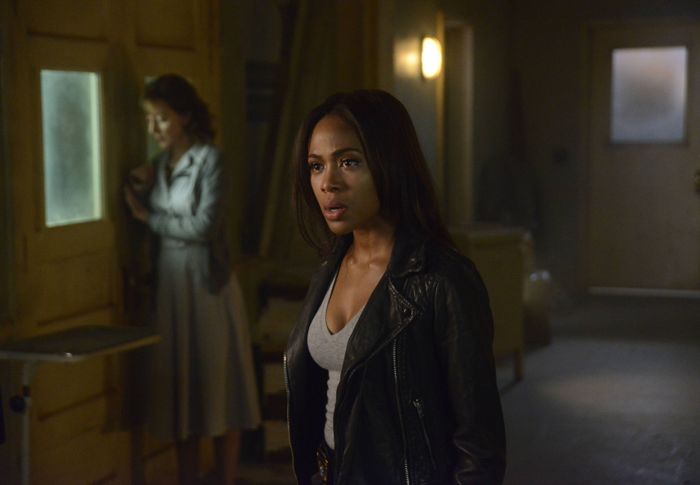 FOX’s SLEEPY HOLLOW introduces viewers to the “Mama” this week. Mama Lori Mills, that is, mother of Jenny and Abbie. She is haunting Tarrytown Psychiatric Hospital, the setting of many a SLEEPY HOLLOW scene, presumably urging patients to kill themselves. Our heroes take the official police case, well-suited to the supernatural component that no one else knows about or is willing to admit.

Lori Mills (Aunjanue Ellis, The Mentalist, The Help) is someone oft-talked about, but never seen. We know she was crazy, and that the demons she wrestled with deeply affected her daughters, who were taken away and placed in foster care. We suspect, given what those daughters have found out as adults, that Lori’s ghosts were real, though, and that she had a firmer grasp on reality than anyone knew, but just didn’t know how to deal with it. “Mama” clears up a lot of the details in that theory and reveals quite a bit about Lori.

The mystery itself, where Abbie (Nicole Beharie) and Jenny (Lyndie Greenwood) investigate their mother’s connection to several recent deaths, isn’t anything special. Since Abbie and Jenny are good, it makes sense that Mama Mills is, too. Besides, a prime suspect, Nurse Lambert (Cynthia Stevenson, Men in Trees, Dead Like Me), who seems a little too sweet, is introduced right away in “Mama.” When Lambert shows up in the abandoned wing, Abbie may be too distracted to think that’s strange, but it immediately confirms her to the even moderately discerning viewer as the real culprit.

Why “Mama” succeeds, though, is the emotional heft bringing Lori into the story delivers. Sure, it could have been a little weightier if saved until a crisis point in one or both of the girls’ lives. But it feels more realistic (if that words applies to SLEEPY HOLLOW) to bring her in during a ‘typical’ week. It makes Abbie and Jenny confront their childhood and their memories, and gives them deeper understanding of where they come from. Lori fought the demons, too, and it allows them to bond, especially in the teary farewell sequence, in a way the family never has. There is love, understanding, and acceptance.

“Mama” is a side trip from the main plot, and Lori isn’t likely to pop up again soon, if ever. However, it’s a strong touch point in the growth of these characters, so is important and makes the episode far more intriguing than if the ghost had just been a random person.

Ichabod (Tom Mison) is sidelined for most of the hour, which does seem a little convenient, given the Mills story. The way SLEEPY HOLLOW gets around this is by making Ichabod sick, which leads to numerous amusing scenes as the ailment is played for laughs. I’ll hand it to the writers; when they are on their game, they can dress up a story in the best of fashions.

Hawley (Matt Barr) also shows up, now cast as the helpful boyfriend. He assists the Mills without asking for anything, and even brings Ichabod, whom he clearly is lukewarm, at best, on in the hand-holding séance, soup. It doesn’t seem like Hawley and Abbie are official yet, and Abbie learning Hawley used to sleep with Jenny will be the false drama that delays them. But they are firmly on the road to coupledom, which is welcome.

Captain Irving (Orlando Jones) is in “Mama,” too, of course, being a resident at Tarrytown Psych. He is one of the intended victims, though that death would be far too pedestrian to actually stick, and so he is saved. More importantly, though, he uses the going-ons as an opportunity to escape, hopping into Abbie’s vehicle as she leaves the facility.

I’d think the other characters would be happier to see him out. Irving’s soul does belong to Moloch, but he’s a friend who has been wrongfully imprisoned. Surely, he’ll be more help out in the world than behind bars. But I guess they also have to hide him, and that could get them in trouble, which leads to Abbie’s reticence. Oh, well. She’ll get over it. Though isn’t Irving staying in to protect his daughter? Doesn’t his leaving endanger her?

In Casa de Henry, Katrina (Katia Winter) is goaded into holding baby Moloch, who appears to be a normal sweet child. In SLEEPY HOLLOW, things are not always as they seem, and the infant is an illusion, created by Katrina’s necklace that allows her to see Abraham as he was, rather than the Headless Horseman he has become. The baby makes her neck scaly and gross, which she can’t help but notice.

I’m glad the baby does this to Katrina because it destroys any fantasies she may have of doing motherhood over again. Surely she can now resist any pull the infant has over her and do what must be done, quickly concocting a potion to stop him. She doesn’t count on his rapid growth into a child, but that shouldn’t change her plan, should it? Her pause at the end of “Mama” has to just be from shock, right?

“Mama” is not the best SLEEPY HOLLOW episode, but by layering lots of good things on top of a formulaic framework, fans will probably be distracted enough not to notice. The character development is rich and the mythology is satisfying, which leaves one with an overall good impression of the installment.