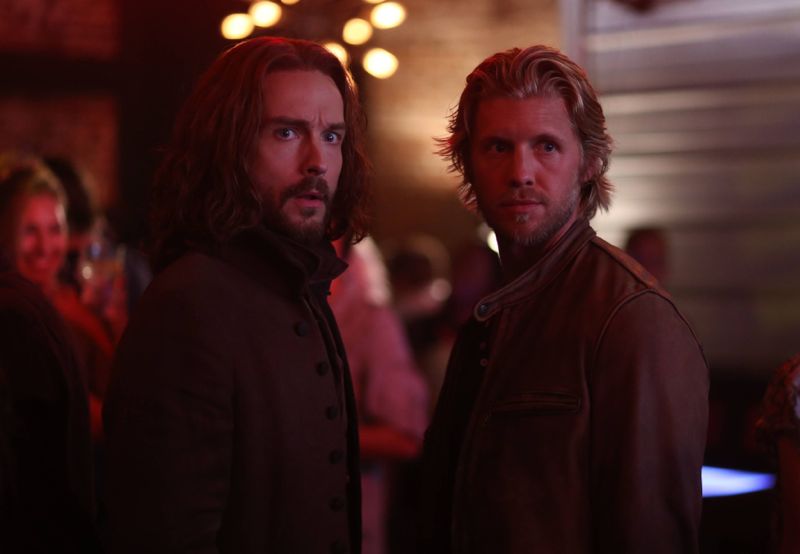 In this week’s SLEEPY HOLLOW, “Heartless,” we learn that baby Moloch is not dead, but merely in need of some TLC. Apparently, the demon doesn’t eat formula, though, instead needing to consume souls (natch). Henry (John Noble) brings forth a shape-changing succubus (various actresses, but mainly Still’s Caroline Ford) to collect dinner, which our heroes must scramble to destroy before it kills more people. This is easier said than done because the only way to kill a succubus is to use a spell to burn its heart, which is hidden somewhere outside its body.

I’m quite disappointed SLEEPY HOLLOW still uses a case-of-the-week format so often. Sure, the succubus plot is tied into a larger arc, that of Moloch coming into our realm. And the hour is full of character development and fun moments, which is why the show is still worth watching. But the story would be so much better if it would allow itself to be more free-form, rather than forced to conform to a repetitive structure, with the good stuff built around the unoriginal core. Sigh.

“Heartless” begins with Ichabod (Tom Mison) and Katrina (Katia Winter) curled up to watch a reality dating show. It’s a humorous scene, Ichabod’s fish-out-of-water quality multiplied times two, and mainly brings a smile to the viewer’s face. However, pick apart the moment a little deeper, and you’ll notice that it illustrates a schism between the pair, with both seeing different things in the show and concerning love. This could be waved away easily enough if the hour didn’t further illustrate that they are at different points in their lives with differing opinions as to what must be done.

Ichabod is a Witness, called upon to stop the forces of darkness. Katrina gets in the way of that a little, as Abbie (Nicole Beharie) is definitely feeling neglected (even if she tries not to show it) when Ichabod repeatedly puts Katrina before his partner. This isn’t good for the work, even more so than Ichabod’s nagging hope that he might still save his son. Plus, when Ichabod is confronted by the succubus, it sees pain and woe within him that definitely indicates Mr. and Mrs. Crane are currently out of sync.

Katrina, for her part, does prove her worth to the team, which even Abbie is forced to admit. But she’s not a team player, striking out on her own mission to go back to being a double agent without consulting anyone first, least of all her husband. One may assume that her motivations are pure, but this disconnect will only increase the tension and discord between the couple, which really do feel doomed to failure at this point.

Even more worrying is how Katrina is sucked into what is going on with Moloch. Her affection for Abraham (Neil Jackson) is most likely feigned, something Henry probably sees through even if Abraham doesn’t, but the look Katrina gets when staring at the baby seems real. Moloch appears to be a typical human infant, not a scary demon child, and he did come forth from Katrina’s womb. Might she see him as a second chance to be a good parent? A way to prove to Henry that she can be? Or is this part of an enchantment she’s under because of the necklace she’s wearing?

While Ichabod’s love life is falling apart in “Heartless,” Abbie’s is coming together rather nicely. Hawley (Matt Barr) doesn’t like to show his vulnerable side too freely, but he’s definitely smitten with the cop, and comes to her defense without asking for payment. The fact that Abbie gives him a reward shows the feelings are mutual because she wouldn’t go out of her way for him if she didn’t care. When Ichabod blesses the relationship, it’s all but certain they will get together.

Now, Hawley and Abbie aren’t a perfect match. He has a heart, but he’s also got a business to run and won’t switch his activity to purely altruistic pursuits. This often puts him at odds with the job Abbie must do. However, they both want this, clearly, so they’ll find a way to make it work.

The vast majority of this review is about the good elements in an exciting story. If the show would just free itself up a bit further, as they sometimes, but not often enough, do, it could be among my favorites. Unfortunately, it holds back, not reaching its full potential, which is a frequent disappointment.