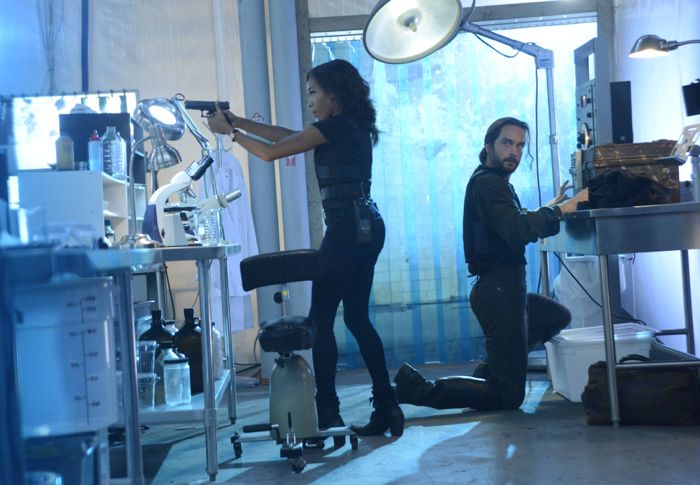 “Deliverance” is the latest episode of FOX’s SLEEPY HOLLOW. Katrina (Katia Winter) escapes the clutches of her enemies, but her troubles are far from over. She has been implanted with Moloch’s (Derek Mears) seed and will soon give physical form in our realm to the evil demon himself. That is, unless Ichabod (Tom Mison) and Abbie (Nicole Beharie) can stop him in time.

If Moloch were to make it to Earth, that seems like an end-game point for the series. Unless the show is on the verge of cancellation, I don’t see the writers taking such a big step any time soon. Sure, there’s always the chance they may do so if they are uncertain about renewal and want to make sure they get to tell the story, and then they’d have to come up with a new game plan if they get picked back up. But all of SLEEPY HOLLOW thus far is building towards Ichabod and Abbie facing Moloch in an epic battle, and it’s too early for that.

Though, I will say the ending of the episode is unexpected and begs several questions about whether this week’s events actually count as a loss for the baddies.

Since it’s hard to believe Moloch will arrive in “Deliverance,” the plot is a little boring, low stakes stuff with a virtually certain outcome. Add to that an increased presence of Katrina, an underdeveloped character who usually comes across as annoying when on screen, and the ‘A’ plot this week is a little underwhelming, even with all the action. Ichabod and Abbie running around, racing against time is nothing new, and without the threat they could fail, it’s not as enticing.

At least Ichabod and Katrina are together again. For the entire show thus, far they are angst-ridden at their separation. Now, the fans will get the chance to see what they are like together, Katrina finally rescued and staying with her husband.

“Deliverance” does find time to explore some interesting things, though. We get more pieces of the overall puzzle. We see Henry (John Noble) is definitely subservient to Moloch, a fairly recent development. We see Abraham (Neil Jackson) put Katrina before his loyalty to Moloch, which is an interesting direction for the character.

More importantly, we see Leena Reyes (Sakina Jaffrey) begin to come around to our heroes. She takes on the job with an immediate dislike of Abbie and Ichabod, intent on reigning them in and puzzled about good recommendations of Abbie. This is a hindrance to Abbie using her time and police access to forward the supernatural mission. Reyes isn’t let in on the whole picture, but she does see Abbie’s value and smarts, and even the usefulness of Ichabod as a consultant. Provided they don’t screw up Reyes’ good will, Abbie and Ichabod should have an easier time of it from here on out.

SLEEPY HOLLOW explores the relationship between Henry and his parents this week, too. Both Ichabod and Katrina think their son may still be saved for the side of good. Ichabod has more doubts, but comes ‘round after Henry inadvertently shares some of his buried pain. I guess it takes a mom or a dad to see past Henry’s public persona, which is of an evil mastermind bent on world domination. But with both in the principle cast, the series forces the viewers to look at a different perspective, even if they can’t agree with it.

For those skeptical about Henry’s chances at redemption, your concerns will be voiced by Abbie, who definitely isn’t buying into the Cranes’ hopes. She has suffered at Henry’s hands and is not the forgiving type. Abbie will make sure Henry doesn’t use his parents’ emotions against them and keep the mission on track.

“Deliverance” isn’t my favorite episode this year for the reasons mentioned above. But it does have some strong elements and is fast-paced enough to be somewhat exciting.