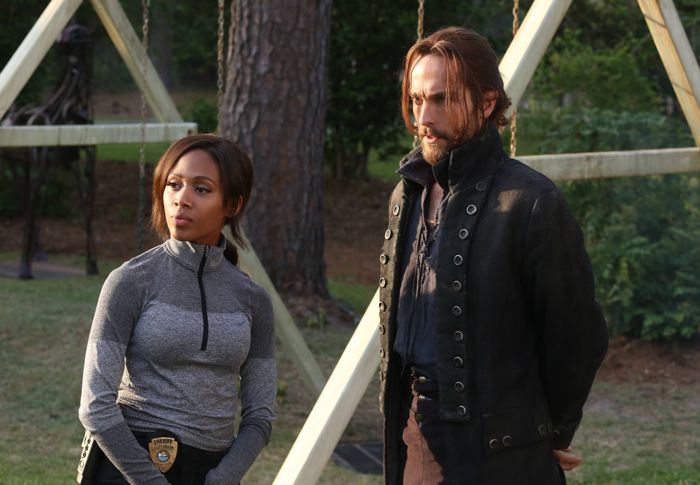 In last night’s SLEEPY HOLLOW on FOX, entitled “Go Where I Send Thee…,” a young girl goes missing in town. Abbie (Nicole Beharie) knows the mother, a woman who was kind to her while Abbie was in the foster care system, and so is determined to help. Ichabod (Tom Mison) wants to assist simply because he got an amber alert and feels it is his calling. The two quickly discover that the girl’s disappearance is supernatural in nature, she having been taken by The Pied Piper (Ryan Gray) as part of a family curse.

“Go Where I Send Thee…” is one of, if not the, weakest installments of SLEEPY HOLLOW ever. The vast majority of the hour is a very basic procedural, with Abbie and Ichabod working a case. The fact that Abbie just takes this on all by herself without any consultation with her boss or the department is ridiculous. The case turning out to be supernatural seems to be just coincidence, not part of the overall series arcs, which stretches credibility of the world being built. Most of the plot just plays out like any cop show on television, and SLEEPY HOLLOW is not just any cop show; it is far better than that.

Normally, SLEEPY HOLLOW mixes the case-of-the-week stuff with the bigger mythology, and often the case-of-the-week turns out to be itself part of that larger story. Here, we have something almost completely stand-alone. That’s fine, I guess, if more time is spent establishing Abbie’s connection to the girl’s mother and it’s used to tell us something new about Abbie’s past. Instead, this does not happen, barely skimming over the elements that might make the crime interesting.

Also, when the series devolves into this basic structure, much of the screen time is usually still given over to the other supporting characters who are working behind-the-scenes on something more. “Go Where I Send Thee…” has only a tiny bit of this. We see that Henry (John Noble) is secretly hiring Holly (Matt Barr) to get him ingredients for some unknown project. It is confirmed that Henry has control of Irving’s (Orlando Jones) soul and could use him to do bad things. But other than these very brief glimpses at Henry’s plans, there is little to tie this episode into anything else.

There is some levity in the episode. The early scene of Ichabod showing Abbie he can drive a car and their playful interaction is fun. They do have some banter later, and Ichabod makes one or two of his judgmental declarations. Holly brings an interesting viewpoint to SLEEPY HOLLOW, a privateer who doesn’t yet care about others, though surely he eventually will. Unfortunately, there’s just not nearly enough of this stuff to salvage the installment.

Look, I know the broadcast networks have a lot of lazy viewers that just want to be entertained without having to think. I don’t understand this mindset because even when I’m tired, I still strongly prefer quality over repetitive junk food. But when a series already has a serial story guiding it and most episodes commit to that, what is the point of producing a week like this? How many of the aforementioned target audience are going to be hooked in by SLEEPY HOLLOW, which they’re likely aware by now doesn’t serve up such an effortless meal on a regular basis? So I really don’t understand why the show would revert to something different than it normally is for a single installment.

At least there’s always next week for them to make it up to the disappointed fans. It’s early enough in the season that “Go Where I Send Thee…” can be overlooked if the coming weeks and months don’t repeat this one’s mistakes.