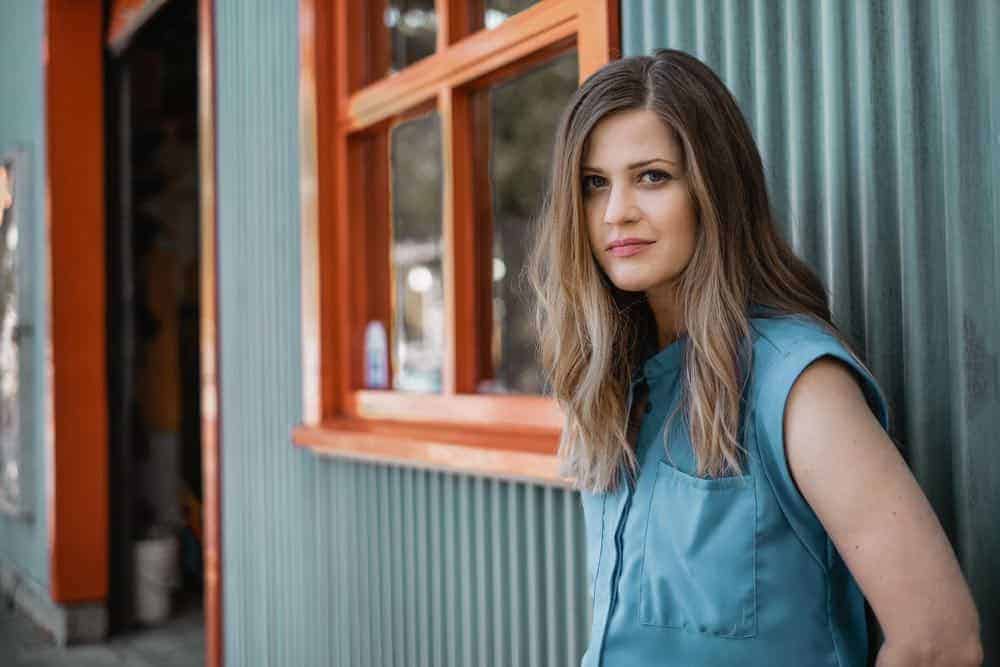 With an array of roles that have been lighting up the screen across Hallmark, Freeform and Syfy, Tammy Gillis is a constant surprise and a welcome one as her roles seem to bring layers that hint at humanity and heart. It is a pleasure to watch her every time she is on screen. Currently co-starring in the Freeform series SIREN, Tammy talks about the fun that she is having working on the show amidst the intense backdrop of mermaids, mermen and other sea life seeking sanctuary in Bristol Cove.

What was the initial appeal for you about portraying Deputy Marissa Staub and working on Freeform’s SIREN?
TAMMY: For me, it was the opportunity to play a very different type of character and also the whole concept of the show is really unique and different from the shows that are out there. These are not your usual type of mermaids.

How would you describe who Marissa is in the series?
TAMMY: Marissa is a very loyal, by the book type of person. She loves her job and is a bit of a loner even though she grew up in this town. Since the mermaids arrived, things have been different and she is trying to put the pieces together to figure out why. The town is not as cut and dry as it used to be.

What do you most admire about Marissa?
TAMMY: She is the only female deputy and she steps up to the plate every time. It’s not easy being the only woman and it’s also not easy standing up to the Sheriff — she has tremendous respect for him and sees him as a bit of a father-figure. She has found a balance between doing her job and being loyal to those she cares about.

What is it like working alongside such a fun ensemble on SIREN?
TAMMY: Incredible! They are an amazing group of people who care a lot about the show and each other. I’m grateful for every opportunity to work with them.

How would you describe the dynamic between Marissa and Ryn (Eline Powell)?
TAMMY: Marissa is very curious about her. I found it interesting that she came peacefully with me and then started freaking out around the male deputies. Maybe Marissa is part mermaid???

Then what is the dynamic like between Marissa and Maddie (Fola Evans-Akingbola) and Ben (Alex Roe)? Do you think she has any favorites among them?
TAMMY: Marissa has love and respect for Maddie because of her relationship with the Sheriff, I feel like we both know what it’s like to deal with him. Ben is a complete charmer, so Marissa definitely has a soft spot for him. I feel like they grew up together and she can see that he is going through something right now.

The SIREN series undertakes really intense and sometimes scary interactions underwater. Which scene so far has really blown your mind?
TAMMY: Every scene underwater is incredible. The first episode of the second season when Ryn gets blown back by the oil company looked so real. Also, the scene where Ben is rock climbing was all completely green screen and looked amazing!

What challenges have you had to work with on the show, such as extreme weather, big stunts, or something that seemed impossible, yet the show pulled it off?
TAMMY: With every show you work on, there are challenges that come up. One major one I remember was last year, we were shooting the huge scene in “Street Fight” with the ambulance and the aftermath of the street fight and it started to snow, and not just a bit but like a massive blizzard. We had already shot one side of the scene and needed the other to match so we had to wait it out. I came up with the idea of shooting inside the ambulance and then eventually the snow stopped and we were able to get the rest.

What are the challenges of portraying a character who is still figuring out that the folklore and myths of Bristol Cove may be true?
TAMMY: The biggest challenge for me is staying clear on what Marissa does and doesn’t know because me, Tammy, knows everything.

What has surprised you about working the show so far?
TAMMY: How incredible everyone is — our cast and crew and especially our main cast. They all care so much about the show and everyone involved. We are really fortunate to have that and Eline’s portrayal of Ryn is just unbelievable. She is so real and honest and vulnerable and yet can be so scary.

What has been the best part about the experience of working on SIREN?
TAMMY: Being a part of something really different and groundbreaking. The opportunity to work with such a talented group of people.

What do you think viewers will appreciate about the show?
TAMMY: I think they will appreciate the interesting viewpoint that the show has, the issues it touches on and the diversity of our cast.

At this stage of your career, what do you think you have learned from the roles and projects you have worked on?
TAMMY: Do your best. Don’t be afraid to try something different even if you are unsure of it. Enjoy every moment because you don’t know when the next opportunity is coming.

What has surprised you most about your career so far?
TAMMY: I’ve tried very hard to not be pigeon holed into one type of character, luckily, that has worked out for me so far.

Then what are the perks of where you are in your career right now?
TAMMY: The fans. I have such a diverse fan base — from SIREN and sci-fi type shows to more of a family oriented fan base with the various Hallmark projects I’ve been part of and hearing how much they enjoy my work and the projects I’ve been in keeps me going. I’m really lucky to have them.

What has been your proudest achievement as a working actor at this point in your career?
TAMMY: I took a big risk in making the movie “Menorca”. It’s about a hedonistic soccer mom who embarks on a journey of self-discovery. It was a very challenging role for me as an actor. I loved making it and hope more opportunities like that to come my way. We got a really amazing response to the movie and I won a number of awards for my acting, which was pretty incredible. People wrote me letters saying that my performance helped change their perspective about their previous relationships which was absolutely mind-blowing.

Has there been any great advice you have gotten about working as an actor?
TAMMY: When I was working on “Ghost Wars”, we were shooting a standoff scene and Meatloaf said to me, “It’s all in the eyes Tammy, that’s all you have to worry about.” Also, there is a casting director in Vancouver, Stuart Aikins (he’s not currently casting anymore), but I asked him for advice one day after my audition when I was feeling a bit stuck. He’s a bit intimidating because has been working in casting since the beginning of the industry in Canada. I terrifyingly asked him “Stuart, what can I do to book more?” and he said “Take more risks.” I have, and here we are.

What advice would you offer to other upcoming and aspiring actors?
TAMMY: Find a way to manage the highs and the lows of the industry. One of the toughest things is in between the jobs — the hustling for that next job. You can get down on yourself and doubt what you are doing but you have to manage that negative voice in your head. Remember that it takes time to have a career — don’t get frustrated that’s it’s not happening immediately. It takes time and a lot of hard work.

At a time when women’s voices are rising to be heard and respected around the country and world, what do you recommend your fans do to lend support in that endeavor?
TAMMY: Hear them and actually commit to supporting them.

Do you have any other upcoming projects that you can share that fans should keep an eye out for?
TAMMY: Of course, SIREN, SIREN, SIREN!! I recently worked on an “Aurora Teagarden Mystery: A Clue to Kill,” which is a Hallmark Movies & Mystery movie starring Candace Cameron Bure, which will be coming out later this year. It was one of the hardest roles I have played to date and also a very different role. I loved the challenge. I am also in an independent feature film “Torn” with Cerebral Monkey Entertainment, where I played Officer Omari.