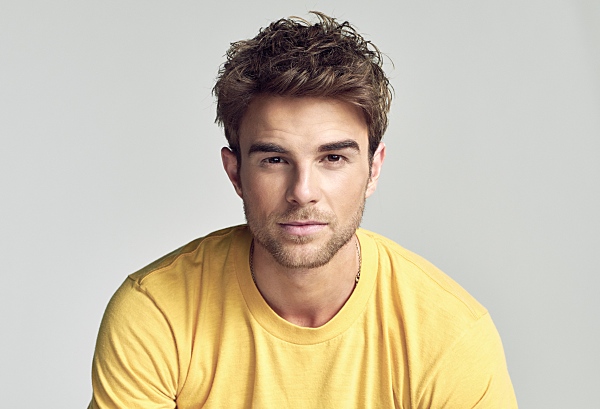 The CW’s new comedy series SIGNIFICANT MOTHER is a bit risqué in its premise that a young twenty-something would end up dating his best friend’s mother.  But in the modern era, we have increasingly seen across the spectrum that the heart wants what the heart wants — for love is mysterious and unfathomable that way — and when Cupid’s arrow strikes, the lure of love is irresistible.

While attending this summer’s CBS summer party, we caught up with star Nat Buzolic to talk about the fun he is having playing a young man so swept away by love and passion in SIGNIFICANT MOTHER, and we also managed to pry a few teasers and insights about his notorious role as Kol Mikaelson from THE VAMPIRE DIARIES and whether he might reprise the role of Kol in THE ORIGINALS.

We have heard there may be some upcoming criminal shenanigans involving your character of Jimmy and Lydia (Krista Allen) on SIGNIFICANT MOTHER.  Can you tease anything about those adventures?
NAT:  What can I say? I can say the word: recreational.  And that will maybe give you a clue as to what we are doing or what one of the characters is doing and how we get in trouble with that. It’s a really fun episode.

Will some of it be to protect Nate (Josh Zuckerman)?
NAT:   The whole show — particularly for Jimmy — is he knows that after the first episode that he has done a bad thing. So now it is all about protecting his best friend and trying to make the situation right the best he can without losing Lydia and without losing his friend.  That’s where the awkward moments kind of come into play.

We haven’t quite seen it yet, but why does Jimmy want to be in a relationship with Lydia?
NAT:  It’s an interesting question.  He feels he has a connection with Lydia and Jimmy is the type of character that when he feels something, he just goes with it. Every idea is a good idea with Jimmy.  So I don’t think he really thinks things through and he keeps things very simple.  He doesn’t like complicating things.  So I think he looks at it as:  age is just a number.

He’s following his heart.  There’s an element of that.
NAT:  Yeah!  Exactly.  I think the script gives you the idea that it is not hard for him to get women, like girls that are his age, but Lydia offers different challenges and that is what is attractive about it for him — he’s dating a “woman.”

There also seems like there is a “danger” factor and he has a bad-boy streak where he might like the fact that it is an illicit relationship and just wants it.
NAT:  Yeah, it’s just exciting.  It’s just fun.  It’s something different.  Maybe Jimmy just likes the challenge and it’s definitely challenging.

What do you think it is?  What is the secret ingredient to their relationship?
NAT:  I think it is that they find a way to meet in the middle and they have the common ground of making something work and they find something special between the two of them.  I think the show is more about the awkwardness for the character of Nate dealing with his best friend dating his mother and how all the characters try to do the right thing in each episode.  Each is trying to service their own needs and then they all try to fix it and it doesn’t work.

For you, what are the funnest kinds of scenes to do on the show?
NAT:  I really love working with Josh Zuckerman.  We really got thrown into the deep-end with this show because we filmed nine episodes in a very short amount of time.  So Josh and I had very little time to build chemistry, but we immediately in some sort of weird way found a relationship like Jimmy and Lydia have.  We’re very different people, but we found a place to coexist and we met in the middle and got to know each other really quickly.  It was just really fun to work with him.  He does some really great stuff.  He plays awkward better than anyone I have ever seen.

What is it like working with your other co-stars, like Jonathan Silverman?
NAT:  I love Johnny.  We had an award program set up for me, where if I was good for the week and worked hard, he would give me a McDonald’s gift voucher card.  I was obviously on a very strict diet.  I couldn’t eat much because my top was always off.  I think I dropped to about 4 to 5% body fat.  So every now and then I would need a “cheat” meal just to make myself feel human. My weakness is Oreo McFlurries and I am very surprised that McDonald’s has not reached out since I have been plugging Oreo McFlurries for the last three weeks — and yet nothing from McDonald’s.  (Laughs) But on the show, I was eating them once a week.  It was Johnny’s reward to me.  I really enjoyed working with him.   I also really enjoyed working with Jay [Ali] and Emma [Fitzpatrick].  Emma is a great musical talent with such a great voice.  Everyone was really, really fun to work with.

Where would you like to see the show go?
NAT:   I think if the show does get a second season that the show will be less about the relationship between Jimmy and Lydia and more about all the characters because each is quite unique and the show has the potential to explore the crazy and wacky things that the characters get involved in.  I definitely think that would be an interesting avenue to go down — like maybe Jimmy, Nate and Atticus go on a road trip and the awkwardness that happens when you throw the Lydia relationship in.  Jimmy and Lydia’s relationship is our starting point, but the show is more about the characters living in this land of Portland and how they interact.  Those sort of stories are a lot more fun, when it is every day situations gone crazy because of these characters

What did you learn from working on SIGNIFICANT MOTHER?
NAT:  I learned a lot, and I think I’m going to learn a lot as the episodes come out each week because I haven’t done comedy before and it was really challenging for me as an actor.  I’m in a dramatic world and I love playing dramatic roles and I like finding truth.

Yet you played a vampire in THE VAMPIRE DIARIES!
NAT:  (Laughs) Well, it was real to me.  But I didn’t have to make people laugh.  I just had to play a truthful moment as my character.  It’s really challenging to play a truthful moment and also find the comedy in that moment.  So I think it is going to take me a little bit of time to perfect that as an actor.  But that is one of the reasons I decided to do this job — because I wanted to challenge myself in a different field.  I think having comical timing is really important, even in dramatic stuff and you can make a situation quite significant when it feels lighter.  So it was just a good challenge for me and I enjoyed doing that.

What differences did you appreciate between your characters of Kol versus Jimmy?
NAT:  Oh gosh, they are so different.  I appreciate playing an American.  I enjoyed being American on TV.  It’s a good challenge and hopefully I can play that character convincingly.  I love the character of Kol because he’s bad and he’s evil and I rarely get to be evil.  I also rarely get to sleep with my best friend’s mums.  So stretch the boundaries — two things I would never do in my real life.

There’s been a rumor going around that you might be making an appearance on THE ORIGINALS.
NAT:  Possibly.

So Kol’s life is not yet over on THE ORIGINALS.
NAT:  Yeah, there’s a lot of rumors.  I’m in the dark — or I’ll tell you that I’m in the dark because that’s what everyone wants me to say.  Let’s just say for arguments sake: I’m not sure if Kol is coming back, but if I am coming back as Kol, it will be a really nice surprise.  Like a McFlurry gift voucher at the end of the week.  (Laughs)

So you want to do some scenes with Danielle Campbell then?
NAT:  Yeah, yeah.  I’d like try some of that chemistry.

Have you been calling her up and asking, “When am I coming to the show?!”
NAT:  She’s actually a real sweet-heart.  I haven’t had a chance to do any scenes with her, but I would love the opportunity to work with Danielle because we get along really well in person.  I think I’d like to try to transfer that to the screen so we can have some chemistry on camera.

Right now, what are you up to?  What are you doing or working on?
NAT:  I actually just recently got a new job, but I don’t think I’m allowed to talk about it.  I’ll be working with an incredibly established director in Hollywood who is doing a new project in my homeland.  I can’t really say anything more than that as that will probably give it away.  So I’ve got a couple of things coming up, and who knows.  We’ll see what happens with SIGNIFICANT MOTHER.  I really want to get back into drama, so I’m hoping a get a few more auditions over the next couple of months.  I’d love to go on Sense8, if I can say that.  My girlfriend and I binge-watched Sense8 and, oh my god, I love that show!

Netflix just picked up Sense8 for a second season.
NAT:  We heard! We were jumping in our apartment when we heard.

So we want to put the word out that you want to be on Sense8 then.
NAT:  Oh yeah.  Oh my goodness, yeah.  I’d love to.  I’d love to do a show like that.  It was really well-written and the actors were brilliant.  It was a cool little storyline with great action.

For Sense8 and its characters, you have to be kind of a chameleon within each character.  Are you ready to do that kind of work where the character shifts that rapidly?
NAT:  Absolutely!  It is a great challenge for an actor.  I just think working on a show like that it gives you a chance to show this industry what you are capable of.  Sometimes you are so limited in your ability to show what you can do by the characters you play and the scripts you get.  So my goal is to get something where I can really showcase what I can do as an actor.  I still feel like I haven’t done that yet.

As we finish up, what is one attribute of Jimmy and Kol that you really admire?
NAT:  I love Jimmy’s optimism.  I can be a bit of a pessimist in life.  I think we all can.  We definitely live in a society where we are always up against it.  I just love the idea of Jimmy.  Like whatever comes his way, he will be positive about it and he thinks he can solve any situation.  I think that is a really important thing in our society today to always have hope and optimism no matter what you are faced with. And with Kol, it’s just like: be a bit of a bad boy sometimes; don’t be so straight-edged.  Girls like bad boys.  It’s the sad truth.

What would be your advice to Kol and Jimmy, if you could sit down and chat with them?
NAT:  For Kol: “Come back, please!  Live again.  Do whatever it takes.”  And for Jimmy:  “Become better at keeping secrets.”