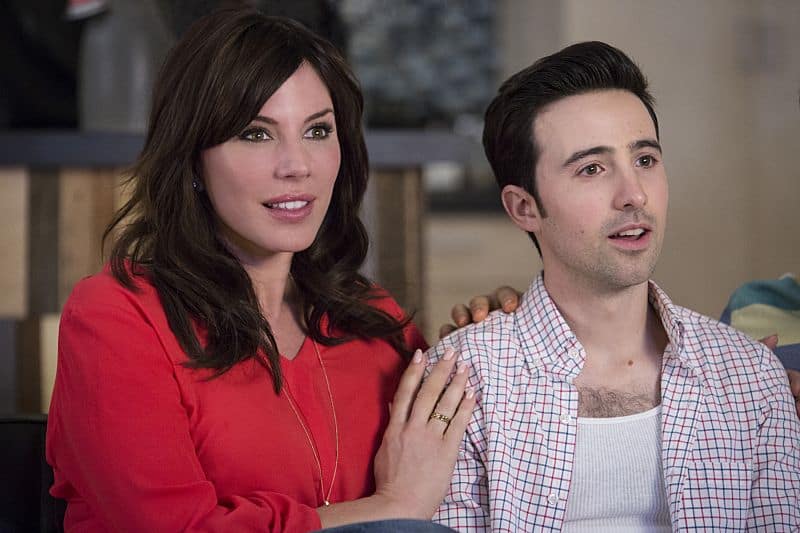 The new CW comedy series SIGNIFICANT MOTHER is a light and loving look at a woman who finds new love in the most unexpected of places: dating her adult son’s best friend. The show offers a look at modern love and the comedy that ensues around it.  As everyone knows, Cupid’s arrow and true love are tricky things for anyone, but both can take aim right at the heart in unexpectedly funny ways.  Exploring both the comedic moments and fun adventures of such a relationship is SIGNIFICANT MOTHER, which seeks to make its audience swoon with romance and laugh with delight.

In an exclusive interview, star Krista Allen talked about her new comedy series and the joy of bringing such an adventurous and charming character to life.

What initially dew you to the show and the role of Lydia?
KRISTA:  Because the script rocked!  It was one of the funniest things I had ever read.  I got it and fell in love with the character.  I fell in love with all the characters.  I was laughing as I was turning the pages.  I didn’t want it to stop.  I wanted to see more and I loved how they wrote the characters.  There was so much heart within the funny humor.  It was just everything.  It was a slam-dunk for me.  I was really, really excited about it.  From the first couple of pages, I was in.  So that’s how this all came about.

In your mind, how do you describe Lydia?
KRISTA:  Lydia has been married for a really long time, about 26 years, and she’s newly separated and going through a divorce.  She’s trying to find herself for the first time.  She’s been taking care of her husband and her son for so long and she finally makes a decision and a choice that it is time to move on and see what life is like without any consequence and to see what happens. That’s where we find Lydia in the first episode.  She decides to just go for it and we end up finding that she gets into a relationship with someone who is a lot younger than she is, but who makes her feel young again.  Someone who makes her feel fun and young and silly, all these different things that she hasn’t felt in so long.  So we see her kind of navigate her life and trying to navigate this new life that she has found.  It is very uncomfortable for her because she doesn’t really know — it’s like she has Bambie-legs right now.  It’s discovering who is she and who she is now.  And she’s finding that she’s really fun and an artist and all these different things.  What I love so much about it is so many women can relate to this kind of thing where you wake up one morning and you say, “I think it is time for a change” — and you do that.  So we get to watch in all this comedy what happens with the choices she makes.  She initially makes terrible choices and it creates so many problems. She tries to be honest, but sometimes she doesn’t quite know how, like telling her son about this relationship she is having with his best friend and the different things that are happening.  It’s really fun.  I guess the best way I can describe Lydia is that she is coming into a different and maybe true part of who she is.  It’s super fun to watch.  All the characters are doing the same thing:  it’s a coming of age for everyone.  Every character is learning something new about themselves and, at the same time, they all love each other so much — they are still a family.  It’s just that a wrench has been thrown into it and they navigate their way through it with love and humor.

What gives Lydia the courage to embark on this new relationship with Jimmy (Nathaniel Buzolic)?
KRISTA:   What gives her the courage is that she is at a crossroads.  She can either stay and feel unsettled — or maybe “settled” would be more of the word for it- — and I think Jimmy has a lot to do with it.  They kind of find each other at a time when he is trying to be an adult and she is trying to be a kid, and they feed off of each other in that way. I also think the fact that her husband has not been faithful to her and they decided to separate and he moved out of their house is what prompted that happened.  Maybe she was in the shower and she thought, “You know what? I need a change.  My clothes are stupid, my clothes are stupid, I need to wear some make-up, and I need to go to the gym.”  (Laughs) None of this happens in the series.  I am just guessing.

Besides Lydia and Jimmy, the other pivotal relationships are Nate (Josh Zuckerman) and Jimm and Lydia’s relationship wither soon-to-be ex-husband Harrison (Jonathan Silverman).  What are those relationships like?
KRISTA:  Nate and Jimmy have been best friends their entire lives Lydia and Harrison practically raised Jimmy.  He has been at their house for so long and there are pictures of Nate and Jimmy as friends going back to kindergarten — which opens the door to the controversy and comedy of the situation.  Nate and Jimmy are like brothers, but are complete opposites.  Jimmy is really immature and not the smartest guy in the world, but he has the biggest heart.  That’s where Jimmy and Lydia connect.  Nate also has a big heart, but he is very neurotic and overreacts quite a bit and is very high-strung; whereas, Jimmy is very laid-back.  Nate is a professional and owns a restaurant and Jimmy has a microbrew in his closet and works as a bar tender at Nate’s restaurant.  So Nate employs Jimmy and they live together as Nate has always kind of taken care of Jimmy.

It sounds like this is not your average contentious comedy, and it is more like all the characters love each other a lot, surprisingly.  Like a loving comedy.
KRISTA:  (Laughs) Yes, everyone really loves each other.  There’s a lot of heart in it.  Everybody does love each other a lot.  They have known Jimmy during his entire life and Harrison and Lydia have known each other for 30 years.  There is still love there. Harrison wants to get Lydia back, but she is moving on with her life.  So it’s just about navigating this very dysfunctional family.  But they put the “fun” in “dysfunction.”

It also seems like there is a lot of good interpersonal chemistry between you and your co-stars, and that is just good casting, which makes it fun too.
KRISTA:  Everyone gets along really well and we work really well off each other. It is just a fun thing.  The writing has so much to do with it and the cast members and how we all have come together is just wonderful.   The second we step on set, Josh feels like my son and Jonathan feels like my soon to be ex-husband and Nathaniel feels like my boyfriend.  It’s really cool.  The writing has a lot to do with that, in structuring this whole story for these characters.

What have you learned from working on the show?  What is something you have gained from it?
KRISTA:  As an actress, just letting go and having fun, and making choices in comedy that come from an honest place.  Not going for the joke and not needing to go for the joke, which is something actors — and especially me — have fallen into.  Like, “look there’s a joke. Make it a joke. It’s funny. Push that.”  So what I’ve learned most with this is just to hone my craft is going for the honesty.  That’s the goal.  The writing is funny already.  So it’s stepped my game up as a comedic actress in trusting the words and trusting that camaraderie that I have my castmates.

What do you find fun about this show?  What kinds of scenes?
KRISTA:  The writing is so fantastic.  They make us look so cool.  They don’t miss a beat and the funnest thing is reading the scripts and getting to create this alternate life that people get to watch on TV.  It’s amazing and just fun.  So for me the funnest thing is going to work with the people I get to work with and be a part of this show.  It is such a special show.  I’m super excited for everyone to see it.  I’m so proud of this nugget of gold that we here.  I am hoping everyone feels the same.  It is actually really cute.  The subject is kind of controversial, but when you really get into it, it’s really about family.

What can fans and viewers look forward to?  What kinds of adventures will Lydia have this season?
KRISTA:  Oh my goodness!  She just gets herself into trouble all the time by not telling the truth or rather not being entirely honest.  That’s a big lesson because it ends up biting her in the butt a lot. It’s all with the best intention and it’s always to save Nate.   She just gets herself into a lot of trouble like that.  There’s an element of that Lucille Ball kind of quality — you have the best intentions when doing something, you’re just not doing it right and there is a better way.  Lydia is extremely flawed as a person and is very confused — actually all the characters are, or we wouldn’t have a show!  (Laughs)  So we get to see her go on this journey and trying to do the right thing and most often at the end of it all, she’ll come through.

What kinds of Jimmy and Lydia misadventures can viewers look forward to?
KRISTA:  He’s Lydia’s partner-in-crime.  He tries to back her up with her hair-brained schemes and the things they try to do to protect Nate.  They have a lot of back-and-forth banter in terms of doing the right thing and, in the end, they find themselves both getting into some trouble.  It’s really fun to work with Nathaniel and people are going to see a really different side of him in our show.

To see what hilarious misadventures erupt as Jimmy and Lydia’s romance blossoms, be sure to tune in for the premiere of SIGNIFICANT MOTHER at 9:30 p.m. on the CW.