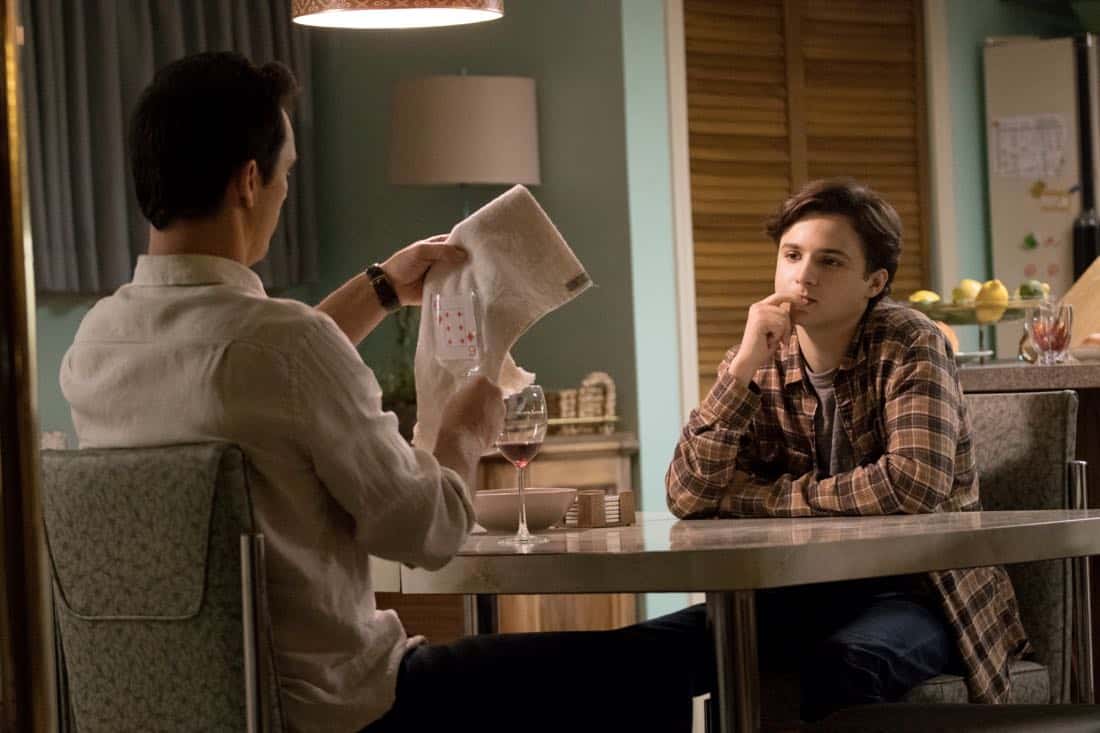 Daring to dreams of an Oscar and striving to be the best actor he can be while honing his craft and and learning from top tier performers and behind-the-camera talent, Dylan Schmid is an ambitious young actor. He embraces film and television roles that expand his skill set and give him the foundation for achieving the next step in his exciting career. It is a delight to see Dylan working so hard and reaping the benefits of his perseverance. In an exclusive interview, Dylan talks about what he appreciates about working on Hulu’s drama series SHUT EYE and the cool film projects that come his way.

What initially appealed to you about the role of Nick and working on Hulu’s SHUT EYE?
DYLAN: The contrast between Son, Mother and Father was what initially caught my eye. It was fulfilling to live out a character’s intentions and beliefs that matched so closely with mine from my childhood, except in Nick’s case it was regular family problems on a much more interesting scale.

How would you describe who Nick is?
DYLAN: He may seem like the average kid next door, but with a lot less friends. He sticks to his own, only because he has too. Aside from that, he is an intricate character with a lot to say, but with much of it deep down of course.

What do you most admire and/or like about him?
DYLAN: Nick always casts another line in hopes to catch something better. It’s a good quality to have.

What is it like working alongside such a talented ensemble on SHUT EYE? Who do you get to work the most with?
DYLAN: Something I’ve realized is every project I’m a part of, I learn a completely different side of the business/art. For example, Thomas Janes’ (“1922” Dad) process was the exact opposite from Jeffery Donovan’s (SHUT EYE Dad). I mostly worked alongside Jeff [Donovan], KaDee [Strickland], Havana [Guppy], and Leah [Gibson].

Any favorite scenes that you got to work on so far?
DYLAN: I think all scenes are pieces of a bigger picture, therefore, they’re all my favorites!

Then what is your favorite part about working on the show?
DYLAN: Working with a great bunch. Both seasons of SHUT EYE we were all blessed as actors to work with talented cinematographers, directors, Lighting, and crew. Some of these people I’ve only dreamed about working with.

What has been the one thing you as an actor have taken away from working on SHUT EYE?
DYLAN: Well, aside from living alone for 4 months in a different country, I did become incredibly passionate about cinematography. So much so, that I even shadowed our cinematographer for a couple days.

You also appear in the Netflix film “1922.” What can you share about your role in that film?
DYLAN: Henry, a confused soul, is pulled in many directions through the stretch. A big heart comes big complications, and in Henry’s case, big responsibilities.

What was the appeal of working on “1922”?
DYLAN: First of all, this is the most unique, and character pleasing film I’ve ever been on to date. Also, I mean, it is based off a Stephen king novella. I fell in love with Henry before I even did character backstory. The appeal was “1922.”

What has surprised you most about your career to date?
DYLAN: How different and varied it is. I believe in the law of attraction. When I was 6 years old I told myself, I was going to win an Oscar and be the lead of a feature by 18. I didn’t win the Oscar, but I was fortunate to be a lead in a feature film. And now it’s working with director Denis Villeneuve in a psychological thriller before I’m 20. I surprise myself with endless possibility, and passion.

At this stage of your career, what do you think you have learned from the amazing variety of roles and projects you have worked on?
DYLAN: So many things, too many things, not enough things.

If there were one role you would like to revisit, which would it be and why?
DYLAN: Henry, from “1922.” I would love to dig deeper into his personality, if I had more time I would of. My preparation was mostly physical work, to look more like a farmer boy, and backstory/accent.

Do any of your characters and the situations they find themselves in ever leave a lasting impression on you?
DYLAN: Good question, I like to think so myself. I take a piece of each character with me that I have ever had the chance to play and who knows, maybe one day create my own version of each for a future role?

Has there been any great advice you have gotten? What advice would you offer to other upcoming and aspiring actors?
DYLAN: These past years have been advice filled, but, I love the idea of “work efficient, not hard.” My best advice would be, understand your gut-instinct and follow it. Also, don’t just be honest to other people, but to yourself as an actor. ‘Cause, oh boy, you have got a journey ahead of you.

Do you have any other upcoming projects that you can share that fans should keep an eye out for?
DYLAN: At the moment, it’s enjoying the rain in Canada. AND auditions, auditions, auditions. I’m sure I’ll be keeping you posted, and I’m looking forward to what is next.

To see what interesting challenges and surprises arise in Nick’s life, be sure to check out the Season 2 premiere of SHUT EYE , which will be available for binge-watching on December 6, 2017. Then the film “1922” is currently available on Netflix. To follow more of Dylan’s career, you can find him on Twitter @DylanRaySchmid