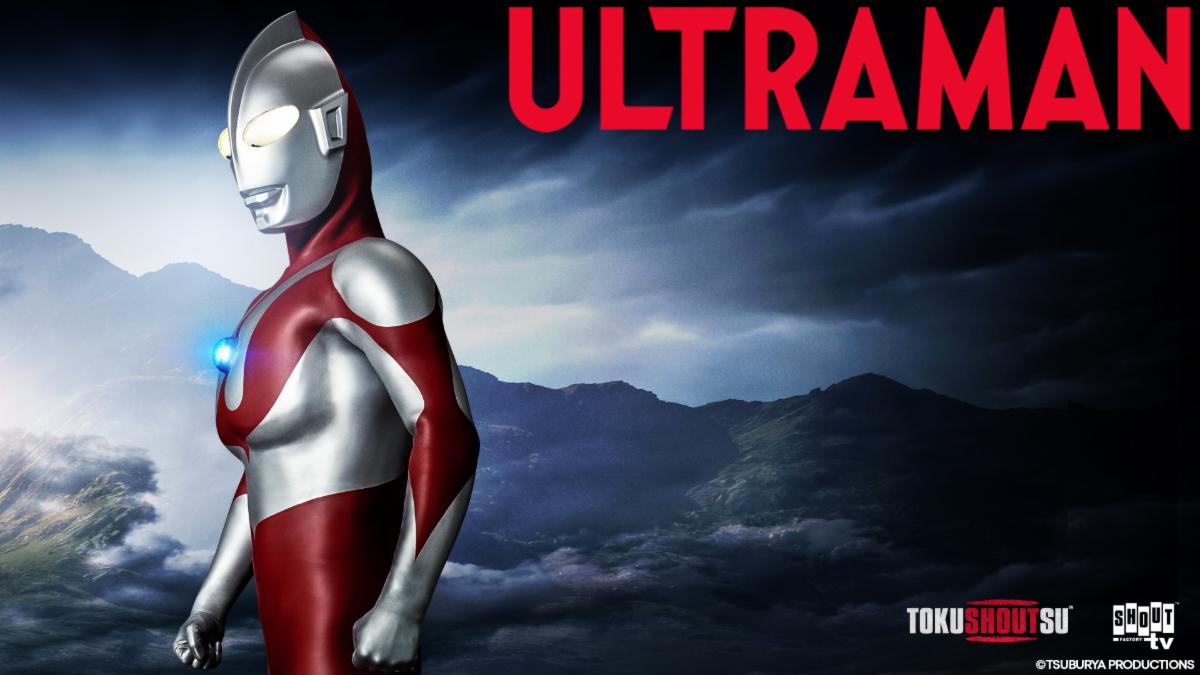 Ultraman content can also be seen on TokuSHOUTsu, a linear channel (#848), in the Gaming + Anime section of Pluto TV. Pluto TV can be found on all leading digital streaming devices and services, including Roku, Amazon Fire, Apple TV, Google Chromecast and more, as well as major smart TVs and game consoles.

The classic Ultraman live-action television series of the 1960s and 70s, produced by Tsuburaya Productions, established new heights of quality adventure and special effects-driven entertainment and built a worldwide audience for the property. The popularity of Ultraman—and the aliens and monsters—has enabled the series to persist to this day, generating over $50 million per year in toys and merchandise in Japan.

Ultraman Series (1966-67)
Ultraman, an alien from Nebula M78 came to Earth chasing Bemular, a space monster that escaped from the Monster Graveyard. Accidently, he crashed with the Jet VTOL that Hayata was flying on. Ultraman merged his own life with Hayata’s in order to save him. Most of the time, Hayata fights monsters and aliens as a member of the Science Special Search Party (SSSP). But whenever in great danger, he will transform into our giant hero Ultraman. This is the true beginning of a world popular, long-running series.

Ultraseven Series (1967-68)
It is a story of unrelenting efforts of the Ultra Guard, that defends Earth from alien invaders, and Ultraseven, a hero that helps human hand in hand with the Ultra Guard to fight. The story revolves around the confrontation between alien intelligent life forms which come to Earth with a clear intent to invade and the Terrestrial Defense Forces (TDF) which has been established to defend Earth from these menaces, in the midst of the “Age of Interstellar Wars” that is taking place among many stars in space as its background.

Ultraman Orb Series (2016)
Naomi Yumeno (Miyabi Matsuura) has had the same strange dream since she was young: visions of a shining giant of light battling a giant monster. With her interest sparked by those dreams, she starts the paranormal phenomena tracking website called “Something Search People” with her friends Jetta Hayami (Naoto Takahashi) and Shin Matsudo (Hiroaki Nerio). One day the trio is on the tail of an unidentified mysterious animal suspected of causing strange meteorological activity. They ignore the warnings of Naomi’s uncle Ittetsu Shibukawa (Shingo Yanagisawa), an officer within the special investigation team VTL, and head towards the center of the strange weather. There they suddenly encounter the Wind Lord Monster, Maga-Basser! Naomi is blasted by the vicious winds but rescued by the vagabond, Gai Kuernai (Hideo Ishiguro). By using his Orb Ring to read the power of two predecessor Ultra Heroes, Gai is able to Fusion Up into a warrior of light from a distant galaxy, Ultraman Orb!

Ultraman Orb The Movie: Let Me Borrow The Power Of Bonds! (2017)
A mysterious item is delivered to paranormal investigators SSP. SSP members Naomi, Jetta and Shin determine that it is a transformation device… the X Devizer that housed Ultraman X both during and after his merging with Xio agent Daichi Oozora (Kensuke Takahashi). Gai Kurenai (Hideo Ishiguro), the humanoid of Ultraman Orb returns from his wanderings to search for X… unaware that this is just the first sign of a new threat to the Earth. The villainous space witch Murnau – obsessed with beauty and collection – has allied with Ultraman Orb’s arch enemy Jugglus Juggler (Takaya Aoyagi), to use the Dark Ring she now possesses. The Dark Ring draws the most evil hearts in the universe and amplifies the owner’s abilities, giving Murnau the power to capture the three Ultra Warriors, Ultraman X, Ultraman Ginga and Ultraman Victory and transform them into jewels for her collection. Jugglus aids her for reasons of his own, while the evil Troops of Aliens of the Planetary Invasion Syndicate lurk sinisterly… Can Ultraman Orb rescue the New Generation Ultra Heroes and defeat Murnau who is aiming to turn the Earth into her own jewels? The battle to determine the future of the Earth now begins!

Ultraman Geed Series (2017)
This is a story of a hero who inherits Ultraman Belial, the evil Ultraman’s genes. Despite suffering from repeating setbacks and despair of knowing the secret of his birth and cruel fate, he never loses sight of friendship and strong will to become a true hero. The story unfolds through the spiritual growth of the protagonist who seeks for the meaning of his own life and finds the place where he belongs, through fighting against evil and his own cursed destiny, to become a hero of justice: Ultraman Geed.

Ultraman Geed The Movie: Connect The Wishes! (2018)
The Gigantic Mechanical Brain Gillvalis and the Galactron Army, intent on wiping out all intelligent lifeforms in the universe, close in on Earth. Riku Asakura heads for Okinawa, where he encounters Ail, who realizes that he is Ultraman and assigns him an important mission.