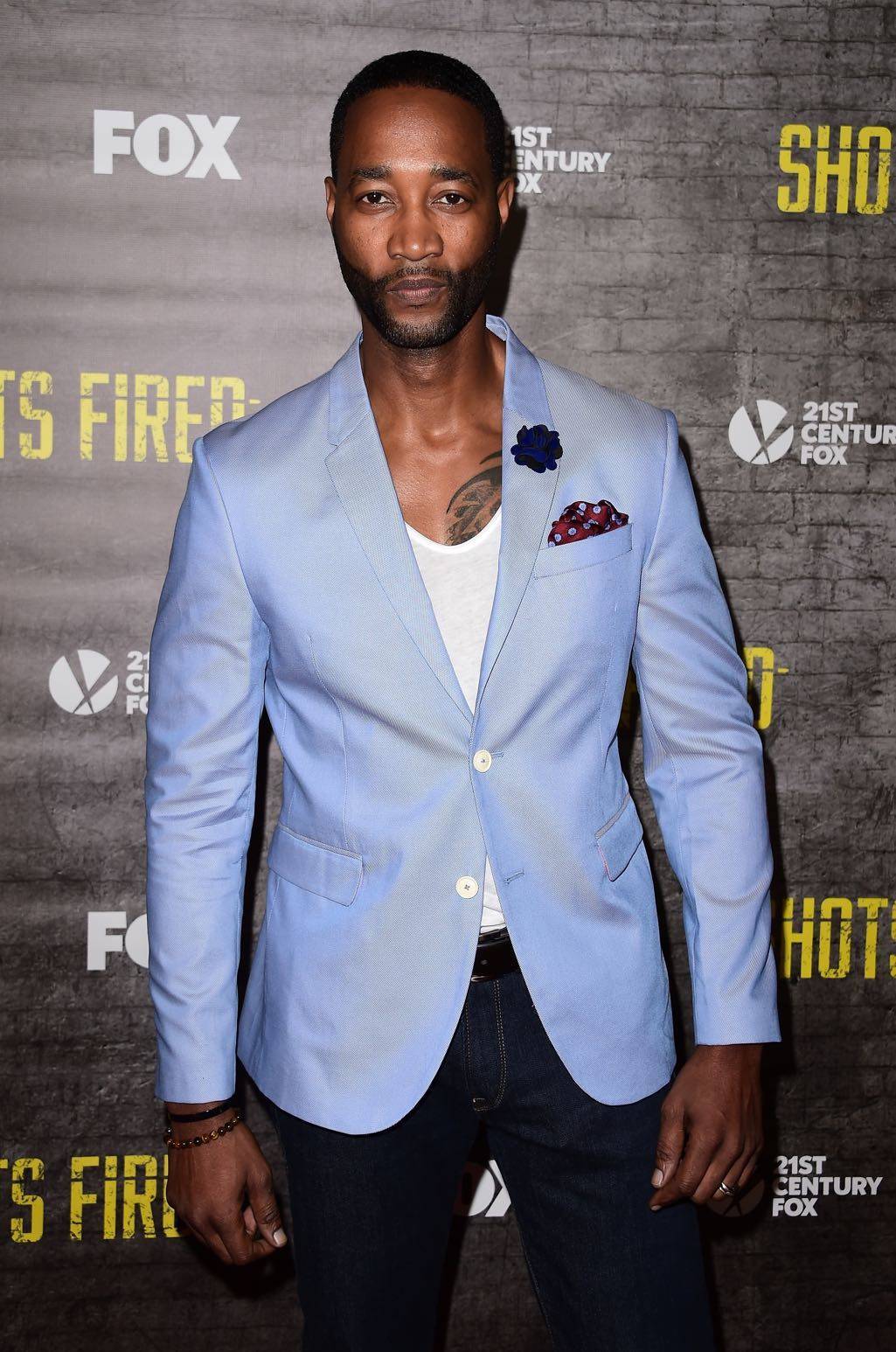 Holding up a prism to reflect the conflicts and difficulties faced by fathers across the United States, Yohance Myles is embracing roles that give him the chance to convey powerful messages of strength, compassion, and perseverance.  His human heart shines through his roles and draws attention to the emotion of that which his characters’ portray on screen.  In an exclusive interview, Yohance talks about working on the new Fox drama series SHOTS FIRED and the importance of the story being told on television right now.

What initially appealed to you about the role of Leon Grant and working on Fox’s SHOTS FIRED?
YOHANCE:  I was elated that FOX wanted to create/add the father figure role of Leon Grant. It totally depicts my personal life as an active and loving father to my own children. The SHOTS FIRED 10-hour event series gives us an explosive autopsy look into America’s Criminal Justice System. It allows us to help figure out why events of this type happens, and it gives viewers a view from various perspectives in the house.

How would you describe your character Leon?
YOHANCE:  Leon Grant is a hard working blue collar type of guy who believes in providing for and protecting his family by any means necessary.

How does Leon figure into the story of the shooting? What role does he have to play?
YOHANCE:  Let’s just say that Leon wants justice and truth to prevail regarding the murder of two boys in the fictional North Carolina town on SHOTS FIRED.

What did you enjoy about portraying Leon in SHOTS FIRED?
YOHANCE:  Leon Grant is a part of who I am already as a father. I have encountered adversities within my own life during earlier phases of raising my children within environments that typically are stereotyped by their appearance. But I decided earlier in my life to not allow certain factors/challenges to define what type of father I would be for my children.

What has been your favorite part about working SHOTS FIRED?  Any favorite scenes?
YOHANCE:  My favorite part of SHOTS FIRED was receiving news that FOX would air this dynamic and eventful 10-hour series. I definitely was excited about being a part of the Bythewood’s legacy of creating great stories and projects as well as working with the talented, beautiful Sanaa Lathan and Stephen James.

What do you hope viewers take away from watching SHOTS FIRED?
YOHANCE:  A sense of awareness and understanding. We are not here to solve any problems as a whole but to continue advocating for the healing and progressive process of establishing better race relations. Also, to highlight the shared importance for the fight of injustices and inequality particularly among people of color regarding our criminal justice system.

What was it like working with such a strong ensemble of actors, like Sanaa Lathan, Will Patton, Stephan James, Richard Dreyfuss, Aisha Hinds?
YOHANCE:   The cast of SHOTS FIRED was a dynamic team of people who cared about this subject matter and genuinely wanted to create an honest story. This series was inspired by the Trayvon Martin verdict and autopsy similar to Ferguson. All of us are respectively talented in our own unique way but I believe  the SHOTS FIRED  subject is greater than anything we could ever attempt to solve with talent alone.

You also are appearing in the film “Created Equal” as Willis Silk Tompkins.  What was the appeal of that role and working on that film?
YOHANCE:  It was an honor to work with actor/director Bill Duke. I met Mr. Duke at a college theatre conference with my acting mentor Dr. Tonea Stewart of Alabama State University, who was the director of a production we performed called “Diary of Black Men” written by Thomas Meloncon. That was 17 years ago and here it is the full circle of life. When I received news that I was selected to be a part of this cast this film became a very special and momentous opportunity for me.

What did you take away from that filming experience?
YOHANCE:  “Created Equal” is a film about women’s rights and the fight for religious freedom which is another prevailing issue in America. I am just glad that I had the opportunity to create a story that helps empower and fight for this cause of justice for ALL women in America. I was raised by a single parent mom who is also a minister so that drew me to this story.

What do you find is the one thing that you look for when considering a new project?
YOHANCE:  When I look for a new project I try to find stories that are authentic yet allow the viewer to rely on their sense of imagination and intuitive genius/spirit. These vital elements vicariously help me complete my work as an actor.

At this stage of your career, what do you think you have learned from the amazing variety of roles and projects you have worked on?
YOHANCE:  I have learned patience, sacrifice, how supportive my wife and children are with my career, and how vital it is to maintain professional relationships. I have grown as a man and father. I truly appreciate God’s love and care for me to function as a working and successful actor.

Are there any cool perks of where you are in your career right now?
YOHANCE:  At this point in my career it’s really balancing work and family. A cool factor is being able to share this with my wife and children: Kimberly Morgan Myles, Maliq, Miciah, Christian, and Bella Grace Myles. We have a summer treat for everyone…another boy is due to arrive in June.

If there were one role you would like to revisit, which would it be and why?
YOHANCE:  Once I complete a role I typically let it go and move on to the next project. I feel that the work has been done and it’s now in the thoughts and hands of the viewers and post production crew.

Do any of your characters and the situations they find themselves in ever leave a lasting impression on you?
YOHANCE:  From my training, my acting teachers have taught me to leave the work at work. We as actors spend so much time preparing and embodying characters that it can consume our personal life at times. The only lasting impression I hope to remain is for the audience to gain something from the shared experience. And that my children can see me as an example for them to be greater than me.

Has there been any great advice you have gotten?
YOHANCE:  Yes, that “tall trees catch much wind” and “never offend the crocodile before crossing the river.” These are all African proverbs for life and the pursuit of success.

What advice would you offer to other upcoming and aspiring actors?
YOHANCE:  Learn, train, be patient, have faith, don’t take short-cuts unless you want long term consequences, never loose your sense of family, you ARE what you EAT, and have fun…you only live once.

Do you have any other upcoming projects that you can share that fans should keep an eye out for?
YOHANCE:  Let’s just say I am currently working on a new TV series and fans can keep a watchful eye out for something brewing on the OWN Network.

To see Yohance’s strong portrayal as a man concerned for his family at a time when tensions are escalating, be sure to tune for all new episodes of SHOTS FIRED on Wednesday nights at 8:00 p.m. on Fox. Then to see more of Yohance’s work, keep an eye out for the premiere of the film “Created Equal” and the Season 2 premiere of OWN’s drama series QUEEN SUGAR.