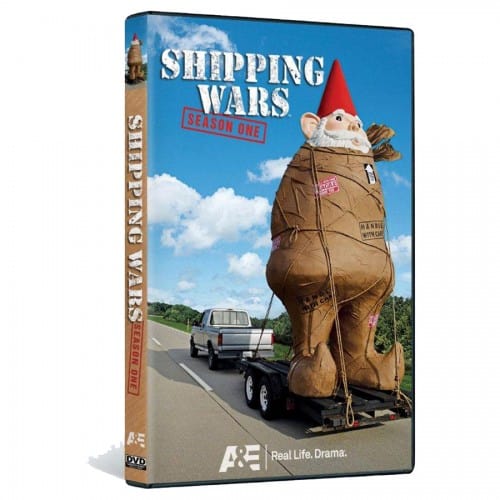 Seat42f and A&E have teamed up to give TWO lucky winners a copy of  SHIPPING WARS Season 1 on DVD. For a chance to win leave a comment below telling us why you want to add SHIPPING WARS Season 1 to your DVD collection. Only one entry per person. Contest ends December 14th. Winners will be notified on December 16th via email so make sure to use a valid email address when you post your comment.

For some, it’s tough ship in SHIPPING WARS, A+E Network’s 2nd most watched show of the year.  This entertaining cross between STORAGE WARS and ICE ROAD TRUCKERS follows six independent shippers who have discovered that fortunes could be made transporting items that traditional carriers won’t touch.  SHIPPING WARS: SEASON ONE, debuting on DVD this November, features 10 high-stakes episodes along with exclusive bonus footage.

Each episode of A&E’s new original real-life series dives into a cutthroat world of rookie haulers and seasoned movers as they battle for the chance to transport the unshippable.  The competition begins with uShip, the world’s largest online auction house for independent truckers. Every day, thousands of shipments are put up for auction. The battle is fierce as the movers have only minutes to bid, and the lowest bidder gets the load. From oversized loads and bulky packages to the truly bizarre, these shippers will haul anything if the price is right, and the high-stakes race is on when they set out to deliver the loads!