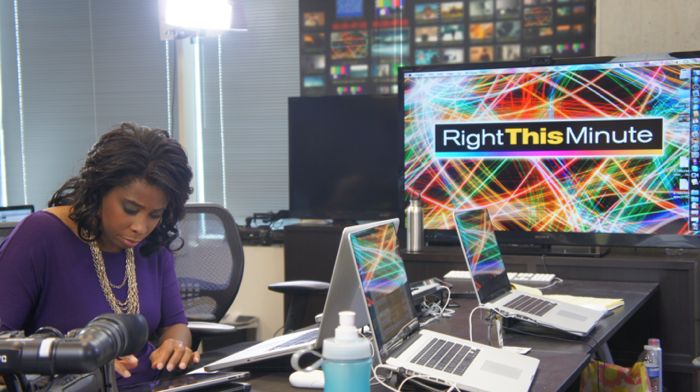 Gotta love this idea:  a television show critiquing online videos.  That’s right, RightThisMinute turns the spotlight on the competition.  With the proliferation of online content, specifically YouTube videos and new TV shows developed/made-for the web, it is great to see that someone has found a way to use that exclusive online content in a way that still lures in traditional television viewers.  In fact, the folks over at RightThisMinute have a twice-daily TV show where all they do is talk about internet videos.  What a dream job!

Imagine it:  getting paid to watch videos online, pick out the best ones to talk about, and then just talking about it for 30-minutes  — twice a day.  Sign me up.  That is a job that most of us would be more than happy to do.

In 2011, RightThisMinute debuted as a small talk show hosted at the Arizona State University School of Journalism.  Then, as its popularity spread, it quickly expanded into its own offices for its second season.  A year after that, as the show continued to take-off, MGM stepped up for the show’s third season in order to guarantee wider distribution and exposure across the U.S.

Who would have ever thought this crazy idea would work?  But the ingenious folks behind RightThisMinute took one look at the social phenomenon of how people were consuming online entertainment and decided to put that online addiction to good use.  They started a show that talks about what people are interested in, or should be interested in, watching online.

We have all received links or recommendations from friends and family with the latest cute panda or kitten video on YouTube, or have been sent the video clip of a sports figure who said something that perhaps he or she should have kept to themselves, but in reality sorting through the millions of YouTube videos is a full-time job – and at RightThisMinute, the five co-hosts have fun doing just that.   They find the videos that everyone should be talking about and then they tell you why it is worth your time.

That kind of social media curating service is invaluable.  No one really has the time to find all the amazing videos that are being posted minute-by-minute or even hour-by-hour on the internet. It helps that someone is sifting through that content and sharing what they have found in 30-minute television segments each day.  It is comparable to the television news programs that give you the daily scoop in the entertainment industry.  So one has to appreciate the fact that someone understands that our personal time is valuable and we may only be able to spare 30-minutes to an hour each day checking out what the hottest and most buzz-worthy videos of the day are.

That is what makes RightThisMinute to timely and helpful.  By just watching one or both their 30-minute shows each day and you will have seen the best-of-the-best.  No more having to figure out what the key words are to pull up the latest fun videos on YouTube, or blindly stumbling across the cutest video ever just posted.

Currently, RightThisMinute airs Monday through Fridays (check your local times and listings) with co-hosts Beth Troutman, Christian Vera, Gayle Bass, Nick Calderone and Oli Pettigrew.  You can check out their hottest selection of viral videos by watching their daily show or catching up online at their website www.rightthisminute.com.  They also love to hear from viewers and fans on Twitter at: @RightThisMinute, so be sure to give them a shout-out there.

Watch RightThisMinute at NOON on FOX5