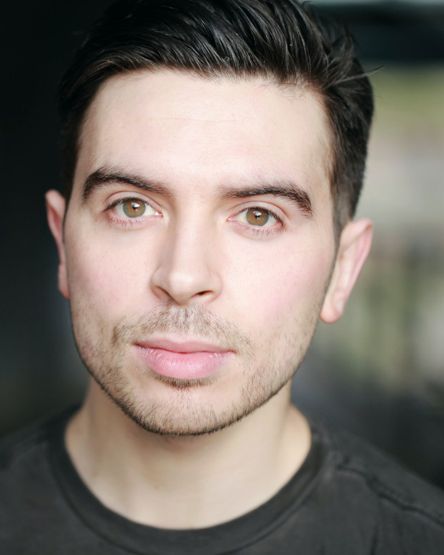 As THE HOBBIT trilogy concludes with “The Battle of The Five Armies,” returning as Alfrid is the versatile and ever-charming Ryan Gage.  In the firms, Alfrid is known as a government official of Esgaroth and servant of Master of Lake-town (portrayed by Stephen Fry).  Alfrid is one of the original characters added to THE HOBBIT film trilogy, first appearing in the second film “The Desolation of Smaug.” What had been just a generally referred to role as a councillor in the book, was fleshed out into a character that now stands out and will be remembered, for better or worse.

In an exclusive interview, star Ryan Gage (also known for his portrayal of King Louis VIII in the BBC series THE MUSKETEERS) talked about the joy of working on THE HOBBIT films and bringing Alfrid to life.

What can you share about Alfrid and what he is up to in “The Battle of the Five Armies”?
RYAN:  My character Alfrid, I would not describe him as evil, but he is certainly not good.  He is a little detestable, rodent of a human being, really.  He is self-serving and greedy and nasty and horrible, which is always a joy to play.

So he is going to try to keep our heroes from accomplishing their goals, surely.
RYAN:  Well, he keeps them on their toes, certainly.  But he goes through some trials and tribulations, himself, with them.  I’m not allowed to say very much, which I’m sure you can appreciate.

Is there anything redeemable about him, or will we just appreciate that he is a villain?
RYAN: He is villainous, but he is not the villain.  He is not evil like the great evil wizards are evil or people like that.  He’s just selfish.  There are redeemable things about him.  He is occasionally stupid and he has vulnerability, and he is occasionally made to look weak and foolish, which will actually generate some sympathy with the audience.  But it may not. (Laughs) It might just promote cheers.

Looking back, what attracted you to the role?  What made you want to portray this character?
RYAN:  It was beautifully and brilliantly written.  I was laughing as I read it and it jumped off the page to me.  He’s got such a theatrical pedigree about him and you start to feel like he’s a character you’ve always known throughout theatrical history.  He’s brilliantly comic and a great sidekick for the Master; although we shall see if that relationship lasts and for how long.

Sounds like Alfrid may have a bullseye on him.  That may foreshadow that he doesn’t make it that far.
RYAN:  (Laughs)  Maybe.  I couldn’t possibly say.  Perhaps, perhaps, perhaps.

What were some of the challenges working in on this film?  I know sometimes all that green-screen work can be challenging.
RYAN:  You know, I hardly did any green-screen work at all.  I had one green-screen moment, which was when I was working with Martin [Freeman].  Without saying too much, I had to touch Martin.  I had to put my hand on him and I had no idea what it would look like.  I actually haven’t seen the movie.  I’ve only seen the scenes when I had to do ADR.  So I don’t know if it is in the final cut of the film.  But there was a certain scene where I had to put my hand on him, and when you have your hands on someone of a completely different height than you in the world of the film, of course you can’t touch them — and they are in a different room with another green-screen.   I was on a set actually and it was quite an evening as I had to pretend to swipe and grab this completely non-existing Martin Freeman.  It’s certainly not something I’m used to doing — working alone.  So that was a challenge.  But it was still fun and we had a great laugh doing it.  I could just hear his voice, whereas I think he could see on the green-screen, if I was grabbing him or nowhere near.  (Laughs)  The other challenge was that my character was a hunchback and I created that shape with my own body.  That could be rather painful at times.  I was regularly having to receive some massage for that because it was tough on the neck and the shoulders.  It was painful, but it was worth it because it gave me a lot in terms of how to play the character.  I enjoyed it, but for that particular aspect, I suffered for my art.

For you, what was the funnest thing about working on this film?
RYAN:  It was so much fun.  Working with Peter Jackson is great fun.  He is such a gorgeous, lovely man.  He is such a great heart and soul.  His humor and he bring so much joy and warmth to everything he does.  He is so brilliant to watch and see him direct.  That was the first and foremost exciting thing — to be working with someone of that calibre.  To be on a set that size and to be working with great actors and many of them are of great wit.  Martin is a hilarious person and Ian [McKellen] is a very funny character.  Loads of them are.  Of course, a couple of them are professional comedians as well as being accomplished actors.  So I spent the first few months hanging out and thinking, “my sides are going to split” from laughing.  Then when I thought that was over, Billy Connolly turned up on set and I spent the next three months laughing even more.  He is probably one of the greatest comics in the world.  So I laughed from start to finish.  It was a joy.

Your role as King Louis VIII in the BBC America series THE MUSKETEERS seems quite comedic as well.  Is that a lot of fun to portray?
RYAN:  Louis is fantastic to portray.  He is quite fun.  He has absolute power and he is not afraid to wield it, except when he is.  It’s the great contradiction in him.  He is brilliant fun to play. In the series upcoming next year, he’s a lot darker actually.  In the storylines, Louis has been through a great deal more turmoil.  There’s still a lot of the humor, but there’s also a lot more danger and darkness in the series.

In these recent roles, it seems like you look for characters who have a bit of humor about them.  Is that something you look for when selecting roles?
RYAN:  I certainly don’t always have to have it.  But I see no reason why if it is there that it shouldn’t be played.  I’ve played a number of roles that have been totally straight and played without any humor at all.  But if it is there, why wouldn’t you use it? It’s a brilliant thing to be able to make people laugh, if you can, or smile at the very least.  If there is something to be mined, if it is not inappropriate, then I would always try to find some levity, as well as the darkness at hand.  I try to do that.  And if there is a very funny moment, I try to find some gravity in there.  I would want it to have both.  I think that most people in life, who have darkness, have joy and humor in there as well.

To see what curious situations Alfrid finds himself in, be sure to go check out THE HOBBIT: THE BATTLE OF THE FIVE ARMIES, currently out in U.S. theaters.  Also be sure to catch Ryan Gage as he reprises his role as King Louis in THE MUSKETEERS, which returns for Season 2 in the U.S. on January 17, 2015 on BBC America.  Ryan’s performances are guaranteed to make you smile — just because you know he is having the time of his life in each and every role.