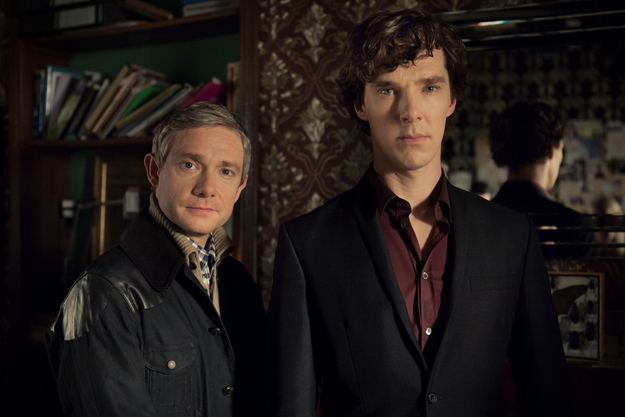 The BBC’s SHERLOCK begins its third outing on PBS tonight with “The Empty Hearse.” Picking up two years after Sherlock’s (Benedict Cumberbatch) death, everyone has accepted the detective’s fate and begun to move on with their lives. Which makes it especially messy when Mycroft (Mark Gatiss) summons his brother home to help out on a new assignment, disrupting the lives of the people who missed Sherlock.

It’s not a spoiler to reveal that Sherlock did not, in fact, die in the previous season finale because there would be no SHERLOCK with Sherlock. That’s just simple logic, easy enough for even the most amateur sleuth to deduct, and it has been pretty clear is press materials and such leading up to this run that Cumberbatch would return.

The questions are, though, how did Sherlock fake his death, why did he not tell his partner, Watson (Martin Freeman), the truth, and what has he been up to while away? Speaking of them in no particular order, as PBS has asked us not to give this stuff away, at least one of these is answered in the initial installments, one is sort of left up to the viewer to decide, and one is played with in spectacular fashion, proving Sherlock is as much as a legend as he is a person. The last I refer to may never satisfactorily be answered, but that only adds to the mystique of the character.

SHERLOCK is as much about the mystery as it is about the answers. Yes, the titular character thrives on putting together the clues, but he doesn’t have to disseminate the information to everyone. He plays his cards close to his chest, and if he didn’t, he wouldn’t be Sherlock.

Not that Watson doesn’t have a few surprises of his own. While missing his buddy, he has met and fallen in love with Mary (Amanda Abbington, Mr. Selfridge), whom he intends to marry. This throws Sherlock for a loop, with his partner’s loyalties now split. Can Watson balance a spouse and the demanding detective? Or will he have to choose? Will that decision even be hard?

Watson isn’t the only one who has a strong reaction to Sherlock’s return. Among the familiar characters featured in “The Empty Hearse” whose reactions to Sherlock’s resurrection are revealed are Lestrade (Rupert Graves), Molly (Louise Brealey), and Mrs Hudson (Una Stubbs). Sherlock does not live in a vacuum, and while he abhors a true community, he is not lonely as he accuses Mycroft of being. He has his friends, and they are happy to have him back, for the most part.

This episode is full of a number of hilarious, wonderful scenes. From Mrs. Hudson’s surprise at Watson’s heterosexuality, to a couple of outlandish theories played out, to an unexpected gay kiss that will make internet fan-fiction writers gasp, to multiple discussions of facial hair, to one-liners tossed into serious bits willy nilly, the writing is sharp and entertaining. Plus, the emotional stuff between Watson and Sherlock and Sherlock and Mycroft is very well done, deepening our understanding of these important bonds. There is a lot to appreciate and enjoy about the 90 minute installment.

There is also new danger afoot. Sherlock doesn’t re-emerge by chance, and what Mycroft wants him to do isn’t the only threat that London faces. Within the premiere, one of the main characters finds their life threatened in a very serious way. Then, Sherlock and Watson get right in the middle of a very large-scale plot that could result in hundreds of casualties, or more. As emotionally fulfilling as “The Empty Hearse” may be, it is also thrilling, too.

“The Empty Hearse” is a jolly good time, a return to form for the popular British programme. SHERLOCK premieres tonight at 9:58 p.m. ET on PBS as part of Masterpiece Mystery.