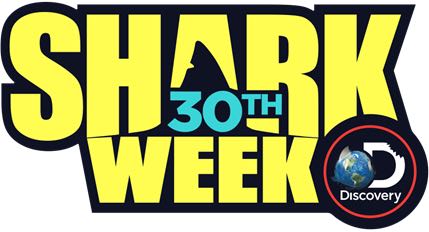 SHARK WEEK dives deeper than ever before when television’s longest-running and most anticipated summer event returns for its 30th anniversary on Sunday, July 22 and continues through Sunday, July 29. After three decades and hundreds of shows, SHARK WEEK 2018 celebrates this milestone with all-new jaw-dropping shark stories that take viewers to unexplored locations and give them extensive insight into the mysterious world of sharks.

SHARK WEEK’s 30th anniversary brings the shark n’ awe with a packed celebrity line-up and unprecedented access to some of the most exotic places in the world. In addition to our team of renowned shark experts and scientists, all-star athletes and the Sharks from ABC’s Shark Tank are joining the fintastic celebration this year including Ronda Rousey, Aaron Rodgers, Rob Gronkowski, Lindsey Vonn, Mark Cuban, Barbara Corcoran, Kevin O’Leary, Daymond John, and Bear Grylls.

This year, Discovery Channel is working with nearly two dozen of the world’s most respected marine biologists and science institutions to bring brand-new, groundbreaking shark research technology and compelling insight on some of the most unique shark species in the world. From using improved Shark Cam technology to investigate the private lives of bull, and hammerhead sharks to searching for gigantic sharks in Cuban waters that were previously closed to outsiders, SHARK WEEK 2018 delivers brand-new innovative shark stories that will once again take viewers to places cameras have never been before.

For the very first time, Shark Week brings together two of the most dynamic franchises on television in a shark vs. shark matchup to create Shark Tank Meets Shark Week. This time, there’s a $50,000 donation on the line for a desperately needed shark-saving cause. In true Shark Tank style, Barbara Corcoran, Mark Cuban, Daymond John, and Kevin O’Leary get out of the tank and into the water. The Sharks are each paired with an oceanic organization to uncover the issues they’re facing and they’ll discover threats of habitat destruction, overfishing, bycatch and more. Armed with new knowledge and a life changing experience, for the big finale our Sharks return to the Shark Tank studio and are joined by fellow Shark, Robert Herjavec to pitch each other why their organization deserves the big prize. Then, in the ultimate Shark showdown, each Shark will cast their vote for the organization they think is the most deserving (they can’t vote for their own). Produced by Radley Studios.

In 1945, one of the largest sharks ever recorded was captured in Cuban waters. This Great White was named ‘El Monstruo’, but sightings of huge sharks around Cuba didn’t end there. The phenomenon of massive sharks around Cuba puzzled scientists, but for years the island nation has been closed off to outsiders. Now, two teams of researchers have finally been granted permission to delve into the mystery of Cuba’s gigantic sharks. To the south, a team looks for a massive Great Hammerhead known as ‘The Queen’. And off Cuba’s north shore, the hunt is on for another ‘El Monstruo’-sized Great White! Produced by ITV.

Olympian, MMA champion and current WWE Superstar Ronda Rousey is trained by shark conservationist and shark attack survivor, Paul de Gelder, to face her fiercest opponent yet: the fastest, bitiest shark in the world, and the ultimate fighter of the sea, the Mako shark. First, Rousey, in a cage, dives into the ring with several lightweight shark species in the waters off Fijiand then moves onto the main event in New Zealand where she’ll “free dive uncaged” with the heavyweight Mako shark. Ronda is out to prove that harnessing the fighting spirit she has developed throughout her career, she and everyone watching, can confront their greatest fears and be victorious in the face of those doubts. Produced by Propagate Content.

The deeper you dive the bigger the sharks? A team of experts go to great white hotspot Guadalupe Island to look for the biggest sharks of their kind. Once before, a 20-foot female named Deep Blue showed herself, then disappeared into the deep. Is that where all the giant sharks live? Dr. Mauricio Hoyos thinks so. In a combination of deep-water cage and submarine dives, Dr. Hoyos and expert shark diver Jimi Partington, plus Andy Casagrande go looking for big, bigger – the biggest sharks in the deep water around Guadalupe. Produced by Anomaly Entertainment.

Top athletes including Green Bay Packers quarterback Aaron Rodgers, Olympic Champion Lindsey Vonn and New England Patriots tight end Rob Gronkowski will join forces with top shark scientists to learn crucial information about the ocean’s top predators. Shark populations are in trouble worldwide, but a daring collection of dedicated shark researchers are using the latest satellite technology to try and save them. If

researchers can use satellite wildlife tags to figure out where sharks feed, mate, and birth their pups, the information will be critical to conserving the species. Produced by Propagate Content.

Shark Cam is back and with smaller tags, Dr. Greg Skomal and the Woods Hole team go to the Bahamas to investigate the private lives of bull, and hammerhead sharks, guided by Doc Gruber and Dr. Tristan Guttridge of the Bimini Shark Lab. In the past, Shark Cam has revealed fascinating new behaviors of white sharks – what new things will the team discover about the hunting techniques of these other fierce species? Produced by Big Wave.

Back on Discovery for the 30th anniversary of Shark Week, Bear Grylls has survived the most extreme environments, from the frozen peaks of Everest to blazing sands of the Sahara Desert, but what will happen when he goes head to head with sharks when they have the home field advantage? It will be his greatest test of wits and skill as the ultimate survivor faces off with the ocean’s apex predator: Bear versus Shark. Produced by Electus.

In 2017, five full grown Great White sharks washed up dead on beaches in South Africa. The necropsy revealed they were eaten alive. What is the only massive sea predator that has the ability to capture, kill and devour a group of 15-foot, 3,000-pound Great White sharks? Orcas. Leading the case is Shark Biologist Alison Towner, searching for the killers in these grisly crimes and sleuthing for the answer everyone is asking: will they attack again? On her journey, Alison locates two Orcas, named Port and Starboard, easily identifiable by their drooping dorsal fins and she determines how they could be the attackers. In one of the most gripping stories of survival, Alison teams up with conservationist Chris Fallows and filmmakers Jeff Kurr and Andy Casagrande to find out how these Great Whites are being wiped out and what can be done to save them. Produced by Original Content Group and Shark Entertainment.

Every year more than 450 boats sink in US waters and 8 out of 10 of these are small leisure craft and fishing vessels. Survivors plunge into deep water, often with no life vest, food or fresh water. Throw hungry sharks in the mix and suddenly there’s a real and immediate life-threatening challenge. In a 48-hour adrenaline-fueled and daring experiment, shark attack survivor Paul de Gelder joins forces with fellow serviceman and marine survival expert, James Glancy to record what happens when a shipwreck occurs in shark infested waters. Scientists Greg Skomal and Edd Brooks track the sharks that circle our survivors, while Medic Mike Hudson and his team gauge their health and safety as their bodies deteriorate in the water over the 48-hour timeframe. Which sharks are attracted to humans in distress? We’ll answer this and the most important question: what gets you first, the sea or the sharks? Produced by Big Wave.

An invasive species is turning one of the world’s oldest marine ecosystems upside down. Dr. Neil Hammerschlag leads a team, including cameraman Joe Romeiro and local expert Alex Ahearn, to the Galapagos to observe and document how tiger sharks – new to the islands in the last 10 years – have re-set the underwater order in one of the sharkiest places on the planet. Produced by Radley Studios.

Shark attacks are on the rise but are these attacks the result of the shark’s behavior or our own? Our team of expert divers Liz Parkinson, Mike Dornellas and Nick LeBeouf and professional cameraman Andy Casagrande put this theory to the test. By reenacting five harrowing real-life encounters and putting their own lives on the line. The most daring shark experiments ever attempted helping uncover the keys to survive. Produced by Lucky 8.

Over four decades ago, giant great white sharks off Long Island, NY gave rise to the legend of JAWS. But all those big sharks were caught, killed and disappeared – until now. With protection, the sons and daughters of Jaws are making a comeback. Dr. Craig O’Connell goes looking for the legendary monsters of Montauk to see if the bloodline of Jaws continues. Produced by Pangolin Pictures.

They’re big, they’re angry, and they’re pregnant! These large great white females migrate to Guadalupe for one last big feed of seals before they go off to have their pups. But where do they go? Dr. Mauricio Hoyos believes they head to the coast of Baja because local fishermen report catching many great white pups there. Dr. Hoyos and his all-female science team of Michelle Jewell and Toby Daly- Engel will track the sharks to Baja, use genetics to identify which pups belong to which females, and confirm a birthing ground to be protected. Produced by Northern Pictures.

SHARK WEEK 2018 is packed with over 19 hours of shark programming with additional details to come.

This year, Oceana and Discovery are teaming up to help protect vulnerable hammerhead sharks, which are threatened by a global shark fin trade that includes fins from as many as 73 million sharks each year. The fight against this brutal, wasteful practice is also supported by collaborations with major brands that raise money for Oceana’s campaigns and create content to educate fans about why healthy oceans need sharks.

Discovery, Inc. (Nasdaq: DISCA, DISCB, DISCK) is a global leader in real life entertainment, serving a passionate audience of superfans around the world with content that inspires, informs and entertains. Discovery delivers over 8,000 hours of original programming each year and has category leadership across deeply loved content genres around the world. Available in 220 countries and territories and 50 languages, Discovery is a platform innovator, reaching viewers on all screens, including TV Everywhere products such as the GO portfolio of apps and Discovery Kids Play; direct-to-consumer streaming services such as Eurosport Player and Motor Trend OnDemand; and digital-first and social content from Group Nine Media. Discovery’s portfolio of premium brands includes Discovery Channel, HGTV, Food Network, TLC, Investigation Discovery, Travel Channel, Turbo/Velocity, Animal Planet, and Science Channel, as well as OWN: Oprah Winfrey Network in the U.S., Discovery Kids in Latin America, and Eurosport, the leading provider of locally relevant, premium sports and Home of the Olympic Games across Europe. For more information, please visit www.corporate.discovery.com and follow @DiscoveryIncTV across social platforms.