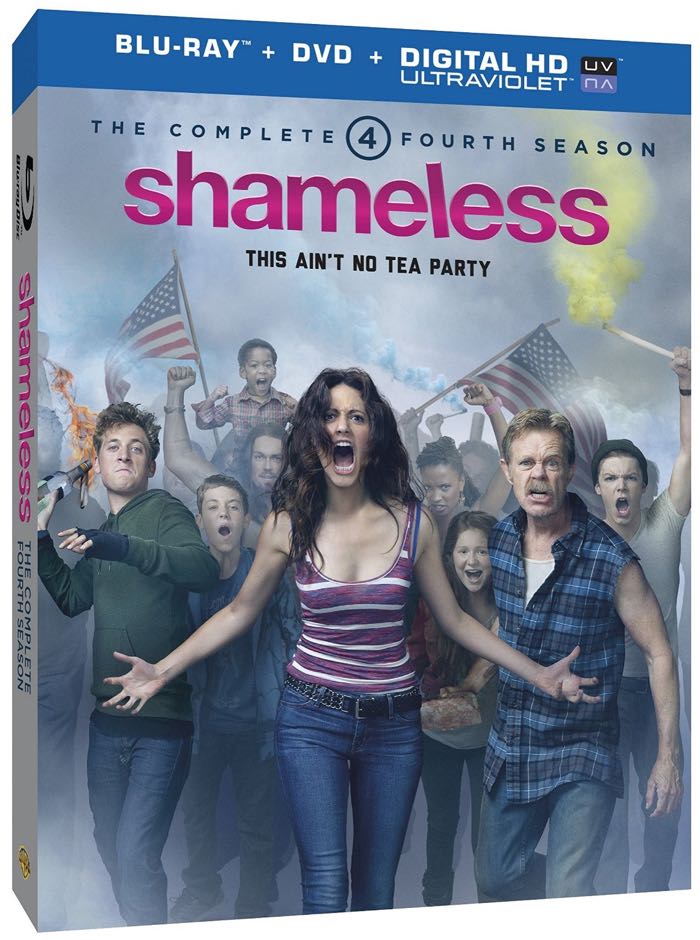 Seat42f and Warner Bros. Home Entertainment have teamed up to give THREE lucky winners a copy of SHAMELESS Season 4 on Blu-ray. For a chance to win leave a comment below telling us why you want to add SHAMELESS Season 4 to your Blu-ray collection. Only one entry per person. Contest ends January 13th. Winners will be notified on January  14th via email so make sure to use a valid email address when you post your comment.

One of television’s most outrageous families, the Gallaghers, is back to entertain viewers with Warner Bros. Home Entertainment’s (WBHE) release of Shameless: The Complete Fourth Season, available December 30, 2014 on both Blu-ray™ Combo and DVD. The release includes all 12 episodes, plus over an hour of bonus content, including two featurettes and deleted scenes.From Emmy®-winning executive producer John Wells (ER, The West Wing) and Warner Bros. Television, Shameless stars Oscar®-nominated/Emmy®-winning actor William H. Macy (Fargo, Door to Door) and Emmy Rossum (Mystic River, Beautiful Creatures) in a fiercely engaging and fearlessly twisted dramedy series.  Macy stars as Frank Gallagher, a genial, alcoholic, working-class father of six independent and resourceful kids scraping by on Chicago’s South Side. Shameless: The Complete Fourth Seasonwill retail for $39.98 SRP for the standard DVD edition and $49.99 SRP for the Blu-ray™ Combo.  The Blu-ray™ Combo includes both the Blu-ray™ and standard DVD plus UltraViolet™.  Season Four is also available for purchase on Digital HD.

The more things change, the more the Gallaghers stay the same.  Whether it’s employment, education or healthcare, the Gallaghers have issues! Season four of Shameless finds the Gallaghers braving another brutal Chicago winter and waiting on the medical fate of their flawed and permanently pickled patriarch, Frank. With oldest daughter Fiona (Rossum) in a stable job and relationship, and newly graduated Lip (Jeremy Allen White) enrolled in college, it seems like the Gallghers might finally have a shot at happiness and realize the middle class American dream.  But with Ian (Cameron Monaghan) still missing, Debbie (Emma Kenney) and Carl (Ethan Cutkosky) dealing with adolescent hormones (or lack thereof) and neighbors Kev (Steve Howey) and Veronica (Shanola Hampton) pregnant with multiple babies, moving up isn’t so easy when you’re down and out.

“Season Four of Shameless continues the show’s streak of excellence with powerful storylines, extraordinary acting performances and top-notch production,” said Rosemary Markson, WBHE Senior Vice President, TV Brand Management and Retail Marketing. She added, “Fans root for the Gallaghers and cheer them on in spite of their flaws and the unconventional way they live their lives because everything they do is for the sake of survival. We’re thrilled to bring all 12 episodes plus amazing bonus content to the fans that can’t get enough of this edgy and compelling show.”