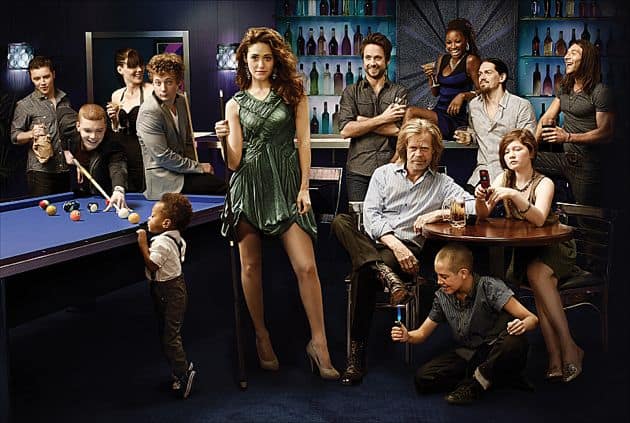 Showtime’s SHAMLESS comes back this weekend with “El Gran Canon,” airing Sunday at 9 p.m. ET. While the Gallaghers may be the same old family they’ve always been, the stakes of season three have definitely been amped up, with real life-and-death danger threatening them all.

I refer, of course, to Steve / Jimmy’s (Justin Chatwin) father-in-law. Estefania’s (Stephanie Fantauzzi) dad blows into town, and, after watching Jimmy for awhile, takes him to Estefania’s apartment and murders Estefania’s boyfriend, Marco (Thierre Di Castro). Then he tells Jimmy that he expects him to watch out for Estefania, and keep his nose clean to avoid trouble with the law, meaning Jimmy will have to get a legitimate job.

Marco’s death is disturbing in that Jimmy is forced to witness it. But Marco is known to be abusive, so despite Estefania’s protests, it’s probably not a bad thing that he is dead.

The point of this really appears to be to put serious fear into Jimmy so that he will do what Estefania’s father wants him to do. This looks to be very effective. Jimmy is noticeably shaken, and while he would have probably helped out Estefania without the threats, he definitely will do his best now.

The thing that goes unspoken between Jimmy and his new “boss” is that Jimmy can continue to live with Fiona (Emmy Rossum) and her family, as long as he puts Estefania’s needs first when she needs him. This is all well and good for Jimmy, but the thing he should consider is, he is putting his new family, the Gallaghers, in danger by hanging around them. If Estefania’s father would kill Marco so callously to manipulate Jimmy, it is likely that he would not be above hurting one of the Gallagher children to continue to do so.

Fiona, for her part, remains oblivious, but she wants to be. As “El Gran Canon” begins, she is bored of Jimmy acting as the house mom, helping with the responsibility, seemingly being a normal, though not legal, husband. The danger presented by Estefania’s father’s surveillance of the house and Jimmy’s disappearance for a day excites her, and she’s soon hopping into the sack with him, whereas before, she made excuses to avoid sex.

Fiona has always seemed the normal, responsible member of the family. It’s a little disappointing when SHAMELESS reveals that she is not much better than the rest. Is her attraction to the danger around Jimmy a character flaw, or just a method to blow off steam? Either way, she is jeopardizing her charges, putting them at unnecessary risk.

Other than that, though, Fiona is doing good, finally moving up in the working world. She has a chance to do a promotion night at the club, and she hands over her last paycheck from a crappy job to do so. Her irresponsibility in not paying the property tax could come back to bite her in the butt, but hopefully, by then she will be making enough money to fix things. One can wish, anyway. At least she might be able to break even, and keep the status quo.

The rest of the Gallaghers are doing what they normally do. Lip (Jeremy Allen White) is getting into trouble with the law, misusing his formidable brains, but never far away from taking the right path. Ian (Cameron Monaghan) continues his affair with Jimmy’s dad, Lloyd (Harry Hamlin), though he is starting to pull away, a good decision, even if Ian may do it for the wrong reason.

Debbie (Emma Kenney), alone, has put her life on hold. Frank (William H. Macy) has been missing for over four months, and while the older children know enough now to worry about him, maybe even hope that he won’t return, Debbie prays at an altar set for Frank, and looks for him every day. It’s sad, knowing that she will be disappointed by her father soon enough. Yet, it’s cool that SHAMELESS lets us see a kid not yet cynical and spoiled by reality, the way the rest of the family is.

While there is definitely real danger for many of the characters presented in this episode, it’s hard to believe that Frank will ever come to real harm. The good die young, but the bad don’t. Frank always stumbles into something to save himself. His family would be better off without him, but as Fiona promises Debbie, Frank will always find his way home.

Speaking of homes, Sheila (Joan Cusack) seems to be building one with Jody (Zach McGowan) and the baby. I wonder how long Sheila can possibly be happy with her daughter’s immature, hippy ex-boyfriend? At least Jody cares, and appears willing to take on the responsibility of fatherhood.

Lastly, Kevin (Steve Howey) and Veronica’s (Shanola Hampton) latest venture is performing racist, historical, live sex shows on the internet. It’s funny because it’s so wrong. The only complaint I have about this sequence is, how come their “fictional” sex is so much less raw and dirty than their real intercourse? This couple’s passion is renowned, but it’s not very evident here. However, maybe they think of this as a joke as much as viewers will, thus why they aren’t giving it their all.

Because the stakes have been raised, this season of SHAMELESS should grow in ways that will be exciting and feel fresh. Yet, the characters remain true to themselves at their core, bringing the same sensibilities they always have. “El Gran Canon” is a fitting season premiere, and is tantalizing enough to get fans pumped for the rest of the run.