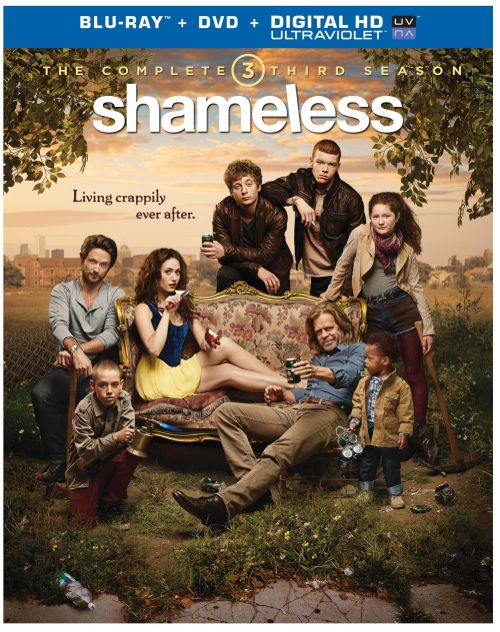 Seat42f and Warner Bros. Home Entertainment have teamed up to give THREE lucky winners a copy of SHAMELESS Season 3 on BLURAY. For a chance to win leave a comment below telling us why you want to add SHAMELESS Season 3 to your BLURAY collection. Only one entry per person. Contest ends December 26th. Winners will be notified on December 27th via email so make sure to use a valid email address when you post your comment.

Join the outrageous Gallagher clan for another scandalous season of Shameless with Warner Bros. Home Entertainment’s release of Shameless: The Complete Third Season, available on December 17, 2013. From Emmy®-winning executive producer John Wells (ER, The West Wing) and Warner Bros. Television, Shameless stars Oscar®-nominated actor William H. Macy (Fargo, Door to Door) as Frank Gallagher, the outspoken, alcoholic, single father of six clever and resourceful kids who live together on Chicago’s South Side. Shameless: The Complete Third Season will feature all 12 episodes from the show’s third season, plus over 60 minutes of bonus content including six featurettes and deleted scenes. The release will be sold in a Blu-ray™ combo pack, which includes the Blu-ray™ and standard DVD, plus UltraVioletTM and will retail for $49.99 SRP.  The standard DVD edition will be available for $39.98 SRP.

Season three of Shameless picks up 137 days since viewers last spent time with the Gallaghers. Fiona (series star Emmy Rossum) is scrounging for cash and finds herself in a succession of jobs, including club party promoter, grocery store cashier, and office worker. Lip is sentenced to community service after stealing a laser, while Ian struggles to prevent Mickey from marrying a woman his father is forcing him to wed. Jimmy contemplates returning to medical school; Veronica and Kevin are determined to have a baby; Carl becomes part of a scheme to cheat a children’s foundation; and Frank, after partying harder than usual, wakes up in Mexico without the papers or cash to get back home. As if their daily struggles weren’t enough, Fiona and her siblings have to deal with Child Protective Services threatening to take away the kids.

“Fans love Shameless for the superb acting, writing, and complex characters,” said Rosemary Markson, WBHE Senior Vice President, TV and Special Interest Marketing. She added, “Season 3 gives these fans even more of what they love and we’re thrilled to release it on Blu-ray and DVD.  With six all new behind-the-scenes featurettes available on both formats, fans will get an even deeper look into the dysfunctional and captivating lives of the Gallaghers.”

Based on the long-running, award-winning British series by the same name, Shameless was adapted for American television by John Wells and original UK series creator Paul Abbott (State of Play) and made its U.S. debut on Showtime January 9, 2011. The series developed a loyal fan base during the first season, with ratings continuing to climb during subsequent seasons. Shameless is one of Showtime’s top three series across Households, Total Viewers, Adults, Women & Men 18-34, 18-49, 25-54. The series averaged nearly 2.5 million Total Viewers in its third season, 20 percent higher than Season Two**.