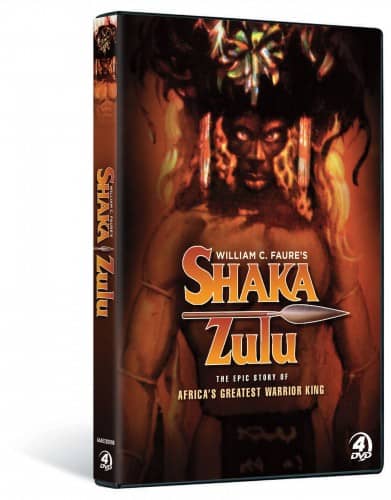 Seat42f and A&E have teamed up to give TWO lucky winners a copy of  SHAKA ZULU on DVD. For a chance to win leave a comment below telling us why you want to add SHAKA ZULU to your DVD collection. Only one entry per person. Contest ends December 21st. Winners will be notified on December 22nd via email so make sure to use a valid email address when you post your comment.

He was an illegitimate prince who reclaimed his birthright with brilliance and brutality. He created a vast new nation from warring tribes and forged an army that defied the most powerful empire on earth. He was Shaka Zulu.

Brought to life in an epic, 10-part production, the story of the legendary, 19th-century African king became one of the most compelling and controversial miniseries in television history. From his boyhood in exile to the bloody struggles that solidified his rule and his proud defiance of British colonists, SHAKA ZULU is the unforgettable tale of a man who stood at the heart of a battle between two worlds.

Filmed entirely on location in South Africa, SHAKA ZULU stars Christopher Lee (The Lord of the Rings, Star Wars Episode II), Edward Fox (The Dresser, Gandhi) and Henry Cele as Shaka. Now, featuring a meticulous, frame-by-frame restoration, SHAKA ZULU looks better than it ever has before.