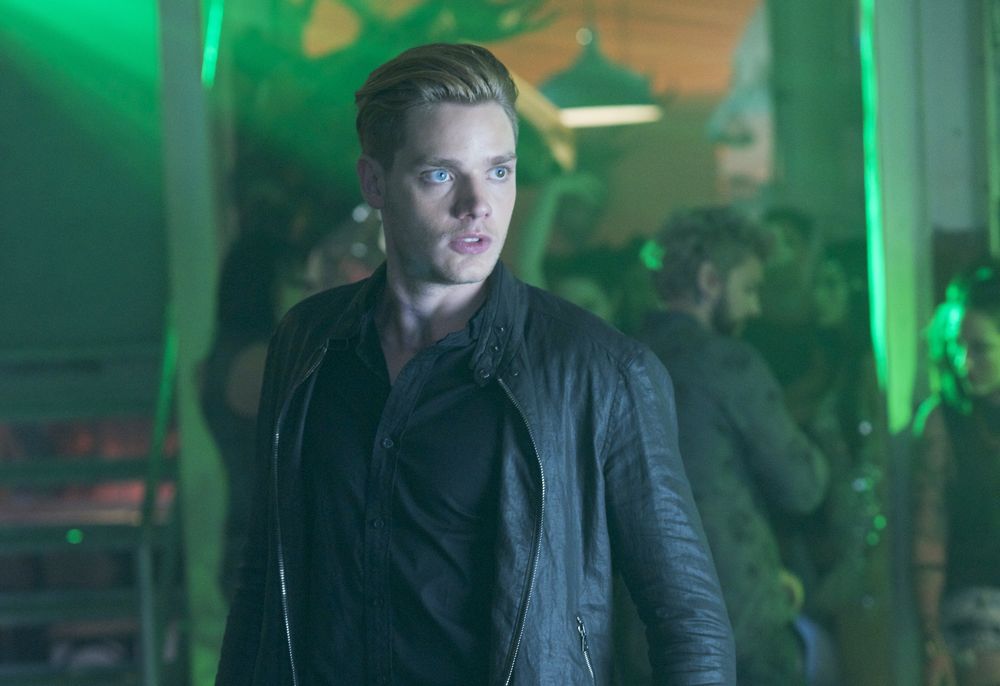 The new Freeform fantasy series SHADOWHUNTERS, based on “The Immortal Instruments” books by Cassandra Clare, is all about demons, angels and creatures of the night hiding amongst us.  In the eternal battle of good versus evil, there are a special group tasked with maintaining the balance known as Shadowhunters, who are gifted with the ability to wield immense power and abilities.  For a young woman on the cusp of her 18th birthday, Clary Fray (Katherine McNamara) is surprised to find herself caught up in a brewing war over a special gold cup that her mother hid in order to prevent a renegade Shadowhunter known as Valentine (Alan Van Sprang) from using the cup to create more demons.  Clary not only finds herself being hunted, but her mother is taken, and Clary must find a way to unlock the memories inside her in order to save them all.  Fortunately, she crosses paths with a particularly skilled Shadowhunter known as Jace Wayland (Dominic Sherwood), and his half-siblings Alec (Matthew Daddario) and Isabelle Lightwood (Emeraude Toubia), who prove instrumental in helping her and together they race to save the world.

In an exclusive interview, star Dominic Sherwood talks about his character, the mysterious Jace, and just what part Jace has to play in Clary’s life-and-death quest for the Mortal Cup.

What initially drew you to the role of Jace?
DOMINIC:  Kind of everything.  It wasn’t just the role.  The script was amazing and it was a new kind of direction for ABC Family [now Freeform], which is always kind of fun to explore something that hasn’t been explored before. So that was good and McG was involved as well, which is fantastic. So it was kind of everything.

What do you like about the Shadowhunter world?  There are a lot of different elements in it. It’s very intriguing.
DOMINIC:  The best thing for me is that it is a completely different world.  It’s modern day New York, where our show begins, and then there’s this crazy separate world — the Shadow world also set in our modern day reality.  That is really fantastic because it is both real and not real at the same time, if that makes sense.

Why exactly is Jace a Shadowhunter?
DOMINIC:  The Shadowhunters are a breed of half-angel/half-human know as Nephilim, who are entrusted with the power and responsibility to protect the world from dangerous demons and monsters and all the things we learnt about that go bump-in-the-night.

So he prefers to be on his own and doing his own thing and doesn’t need a team?
DOMINIC:  No, he absolutely needs his team.  Jace has his team, which is made up of his adopted brother and sister, Alec and Isabelle, and he would live and die for them.  They are a team as one unit.  If one of them were to die, that would literally and physically kill the other one.  So he absolutely needs his team.  But there is a governmental system in the Shadow world called the Clave, which is like a government in any other sense of the word, and that is what Jace doesn’t like.  He is not happy with the way the Clave runs things and the way that the rules have been set up so that the Clave has ultimate power.  That’s kind of what he is against.

Where does Clary fit into this?  Is she joining their team?
DOMINIC:  Clary is kind of the wrench in the system.  Everything is kind of going great for Jace, where he is shadowhunting and then going off and having sordid affairs with different down-worlders and creatures and he is very happy in his life.  He has his best friend and his team all set up and then Clary kind of turns up, and he’s like, “Oh, this is what love feels like.  I’m not sure I like this.”  She ruins the perfect equilibrium for everyone.

Is there is a romance blooming there between Jace and Clary?
DOMINIC:  There is absolutely a romance brewing there.  That is not to say, however, that it doesn’t come without intrigue and twists and turns throughout the season.  So there are definitely some pretty major ups-and-downs for both Clary and Jace as individuals and as potential love-interests.

Clary and Jace both seemed surprised by each other and the fact that they do have feelings for each other.  What do you enjoy about that relationship?
DOMINIC:  It’s interesting to play a character who has his emotions so deep in him.  He is not only a strong brother and cares deeply and passionately about the people around him, but he strives to hide all of that.  He has been taught as a Shadowhunter that your emotions get in the way.  For me, it was interesting to kind of be able to peel back these layers of structure in Jace that has been ingrained in him through his upbringing and through his training, and being able to peel those back and see very much that there is a softer-side to Jace inside his hard shell.

Does Jace view Simon (Alberto Rosende) as competition or does he even consider part of anything at this point?
DOMINIC:  There’s not an animosity, but there is definitely is a wariness of this other guy.  I think  at this point in the season, Jace is still not sure about Clary.  He does not know how he feels about her.  He is intrigued by this girl who didn’t know that she was a Shadowhunter.  So it is just intrigue at this point.  But there is definitely a level of questioning towards Simon.  Me and Alberto, who plays Simon, have always joked that if Simon and Jace had met outside of Clary, they probably would have been really good friends.  But now, Clary is in the way.

There is another threat on the horizon.  There is Valentine.  How big a threat is Valentine to what is going on in Jace’s world and what Clary is up to?
DOMINIC:  Valentine is like the apocalypse.  He is kind of the Hitler of our story.  We were always told that he is the worst of the worst.  He is the most dangerous and the most destructive and the most horrendous person.  Unfortunately, for the Shadowhunters, they thought he was dead and wasn’t an issue anymore.  Then Clary kind of pops up and all of sudden Valentine is no longer a past threat that we would read about in their history books, and very quickly becomes a current and actual threat.

With someone like Alan Van Sprang, I imagine that doing scenes with him, even as a villain, has got to be fun to work with.
DOMINIC:  Alan is really wonderful.  I can’t give too much away, but I do have minimal scenes with Alan in Season 1.  Without giving too much away, those were pretty heavy scenes for both of us.  He is such a wonderful and well-versed actor that he is really great to work with.  In a show like this where it deals with the dichotomy of good and evil, it really relies on how good your bad guy is and Alan plays a very scary bad guy.

What for you were the challenges of portraying a ferocious demon hunter?  Did anything give you the creeps?  What was hard to work on?
DOMINIC:  I think the biggest thing was throwing myself into this character, as it always is when throwing yourself into any character that does not know who they are throughout a lifetime Characters that I have played in the past, I could at least read up on to see what they do what they do. [Laughs] There’s very little about Shadowhunters in encyclopedias out there.  So that was probably the hardest thing for me.  As a group, we all had to kind of decide how we walk and how we hold our weapons.  Everything has to have a purpose.  Like: why do we hold our weapons in a certain way and why do we fight the way that we do?  Why do we fight with swords opposed to Shadowhunter guns?  We had to go back to Cassie’s original source material as a sort of guide and then also bring in some of our own ideas. We had movement training to determine how Shadowhunters walk and why Jace holds his sword differently than Clary holds her sword and Alec holds his sword.  It’s all part of exploring the characters.  I guess that was the most challenging thing:  developing a full-rounded character.  Every word that he says comes from a place of who he is in the past and all of that has to be developed.  So I think that was probably the most challenging bit.

Then on the flip-side, what was the fun thing to be able to do on the show?
DOMINIC:  What is interesting is it is the same.  It is all of that.  I enjoy discovering these characters, or any character I play.  I work very hard to pick characters that I know I will enjoy.  I am in this job because it is what I love to do and I enjoy it, and if there is ever a point where I’m not enjoying it, then there is something obviously a little bit wrong there.  So to me, the exploration and development of the characters and making them as real as possible is the most fun.  Stunt training is always fun too.  Learning to fight with a sword and hand-to-hand combat and that sort of thing.  But even the way Jace talks and his accent, which is different than mine in the show, and developing all these nuances — it’s the most hard, but it is also the most fun.

What can fans look forward to as the season progresses?
DOMINIC:  You can look forward to heart-break.  I don’t want to say it’s GAME OF THRONES-level shocks, but there are some definitely coming your way.  We’ve got action and suspense and twists and turns.  We brought in new things from not only Book 1 — Season 1 is loosely based on Book 1 — but we also brought in elements of Books 3, 4 and 5.  Our writers have also brought in new things and have done a wonderful job in keeping the story fresh and alive and interesting for a new audience.  So you’ve got a whole bunch to look forward to.

To find out if there is indeed a chance for Jace and Clary’s love to blossom and if they can stop Valentine in time, be sure to tune in for all new episodes of SHADOWHUNTERS on Tuesdays at 9:00 p.m. on Freeform.