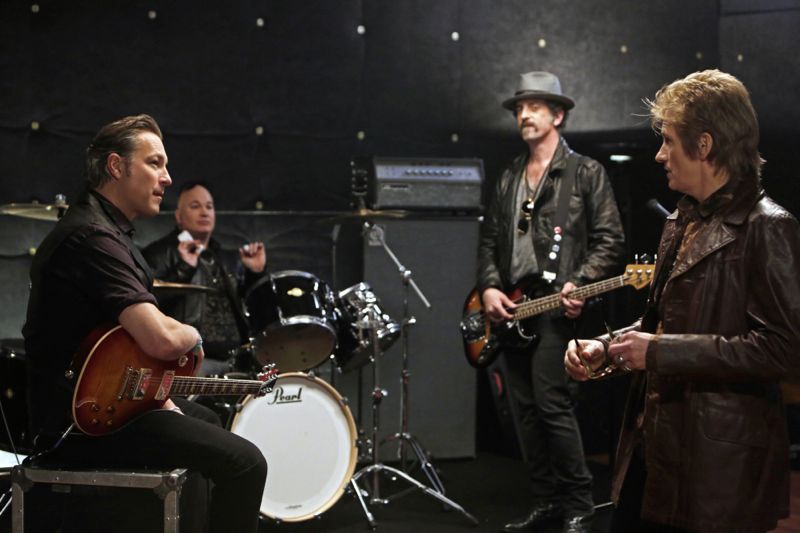 The concept of FX’s SEX&DRUGS&ROCK&ROLL is simple enough. There are two former band mates who once made beautiful music together, but split up because the lead let his ego get in the way of their friendship. When a previously unknown child shows up and wants to force the two to work together for her own gain, there is suddenly a glimmer of hope that the magic lost can be recaptured.

The pilot of SEX&DRUGS&ROCK&ROLL gets through a lot in the initial set up. At the start of the half hour, we see Johnny Rock (Denis Leary, Rescue Me) at his low point. Unable to sell albums, he’s fifty and has no direction. This is actually a fascinating, if depressing, character, but the show leaves little time to dwell on it, quickly bringing his daughter, Gigi (Elizabeth Gillies, Victorious), into the mix to drive forward her plot.

Letting Gigi hijack Johnny’s story is kind of the point of her character, and it rips Johnny away from his dwelling. I can’t help but feel, though, that this abandoned thread could definitely be mined for really good drama if given the chance. Gigi doesn’t make Johnny succeed, at least not yet, but I’m disappointed not to get to explore Leary’s take on someone who just doesn’t know how they’re going to keep living at middle age. The show may do so a bit going forward, but clearly that won’t be his main thrust.

The second half of Johnny’s partnership is Flash (John Corbett, Parenthood), who is touring with Lady Gaga and finding steady work, if not fame in his own right, his solo effort not doing so well. When Gigi makes Johnny approach Flash about teaming up again, Flash is completely resistant to the idea, which makes sense, given their history. He quickly changes his mind, but the viewer doesn’t get a satisfactory answer as to why.

I think Flash is probably a character that works, but SEX&DRUGS&ROCK&ROLL doesn’t take the time to show us how, at least not in the pilot, which is baffling, since he seems to be on the of the three central players. Flash obviously doesn’t hate Johnny entirely, given the friendly reception he gives his pal, but he is very firm on not working with Johnny again. He does come across as too substantive to be swayed by the sexy picture of Gigi that is supposed to be his draw, even if one could forgive him for letting lust sway him. I’d like to think that the real reason Flash signs on is because he wants the chance to make his own wonderful music again, but that just doesn’t come through here.

SEX&DRUGS&ROCK&ROLL is an interesting series, to be sure. The cast, which also includes Robert Kelly (Louie), Elaine Hendrix (Joan of Arcadia), and John Ales, is an interesting mix of experienced, but not super well known, players (other than Leary and Corbett, of course). The world it inhabits is very intriguing, and the show seems to take the rock landscape seriously, giving an insider’s, but very personal, view of it. It is contemporary, but with a spirit of the glory days of the genre, and the soundtrack, which is at least partly original, enhances the piece pretty well.

I’m just hesitant to fully commit to it yet. The way Flash is handled in the first episode is a huge sticking point for me, leaving me feeling somewhat unsatisfied. Add that to minimizing Johnny’s depths of despair and I worry very much that the program will favor flash and chords over character development, which is unusual for an FX series, and not a good sign. But lots of great shows have rocky beginnings, so maybe the writers just weren’t quite sure how to get to the story they wanted to tell right away, and once it settles in, its problems will melt away. The bones of the piece could certainly support a quality series. At least, I hope that might be the case.