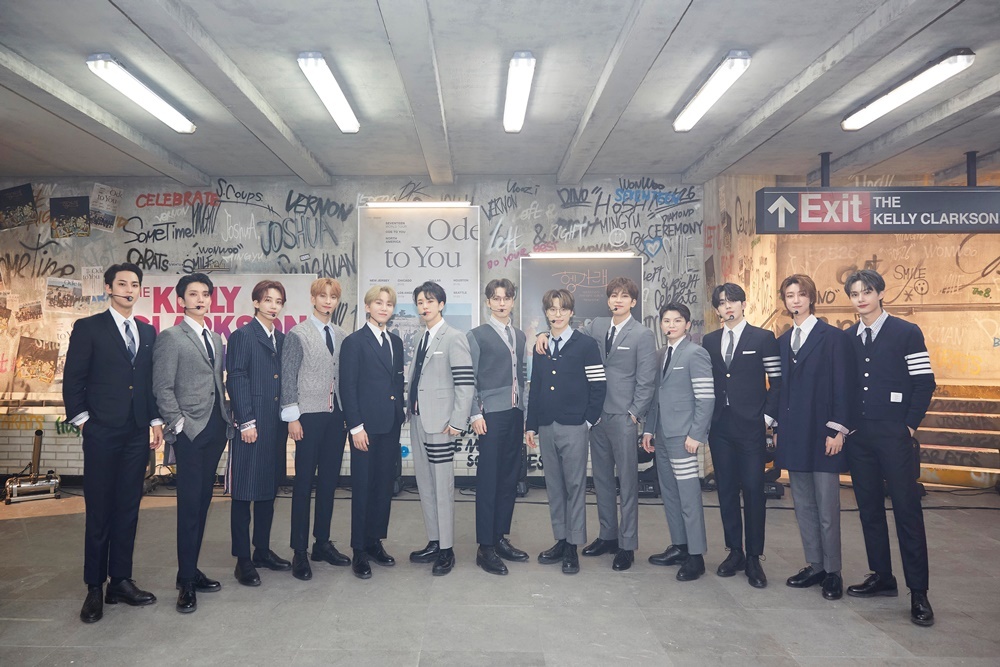 “Performance Powerhouse” SEVENTEEN once again captivated the global audience on The Kelly Clarkson Show with “Left & Right,” the lead title of their seventh EP Heng:garæ, which sold a million copies in its week of release.

The act was introduced as a K-Pop Performance Powerhouse to “have sold over six million albums and had their songs streamed more than two billion times all over the world.”

The performance opens with the members of SEVENTEEN suited up and hard at work in an office environment. As soon as the clock shows that it’s time to leave for the day, “Left & Right” begins with a different kind of vibe that the act hasn’t shown before, adding further anticipation and hype.

By incorporating office supplies and props in their performance, SEVENTEEN fully immerses the viewers into their office worker concept and theme. As the song progresses, the act transforms the once mundane space into a stage of their own, bursting with their trademarked energy and color.

The highlight of the performance is their casual segueing into a subway station covered with elaborate graffiti and a poster of The Kelly Clarkson Show. Heads bobbing and shoulders bouncing to the rhythm, SEVENTEEN illustrates the bustling energy of office workers finally heading back home after a long day at work.

In 2020, the renowned self-producing idols established themselves as “double million sellers” through the releases of their recent special album ; [Semicolon] and their earlier EP, Heng:garæ, both of which sold more than a million copies, respectively. The band continues to expand their U.S. presence through their cover shoot on Seventeen magazine, as well as an honorable mention in TIME’s list of “The Songs and Albums That Defined K-Pop’s Monumental Year in 2020.”

With their recent performance of “HOME;RUN” on The Late Late Show with James Corden surpassing more than 2 million views in just a few days, SEVENTEEN is gearing up to make 2021 a year of their own with even more performances and new releases to come. The act will be hosting ‘2021 SEVENTEEN ONLINE CONCERT ’ on January 23.

About SEVENTEEN
Racking up 2 billion streams and selling 6 million albums, SEVENTEEN has rocketed to the forefront of the global music industry fueled by a fiercely independent spirit, in-house creative ecosystem, and one irresistible work after another. The group’s innovative structure hinges on the interplay of three units: the hip-hop team led by S.COUPS, vocal team led by WOOZI, and performance team led by HOSHI. Living up to the title of “self-producing idols,” the self-contained and self-empowered act has unassumingly made history and become one of the biggest K-pop groups ever due to their world-class synchronization, jaw-dropping choreography, and tight teamwork.

SEVENTEEN’s 2015 debut EP, 17 CARAT, emerged as “the longest running album on the Billboard World Albums Chart,” remaining in the chart for eleven weeks. Billboard crowned An Ode the “Best K-pop Album of 2019” as the act packed arenas and sold over half a million tickets. The EP Heng:garæ elevated them to rarified air in 2020. Over 1 million copies were sold during the week of release, cementing SEVENTEEN as “the only Korean act other than BTS to sell 1 million copies first-week.” Not to mention, it earned “the third best first-week sales in South Korea.” On its heels, they eclipsed 1 billion total streams on Spotify, making them the third Korean boy group to achieve this feat. With their following EP ; [Semicolon], the act made their U.S. TV debut on The Late Late Show with James Corden.