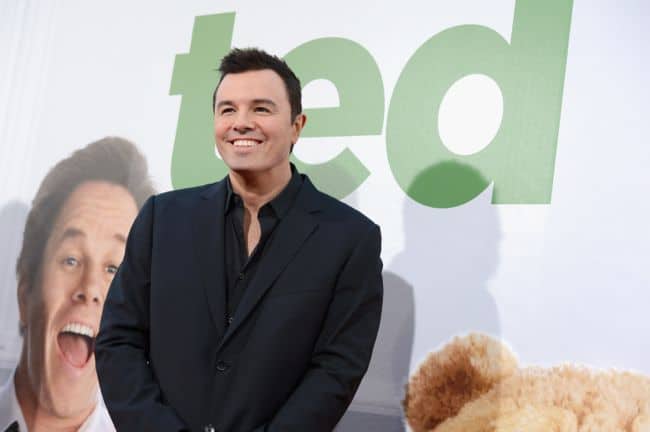 Seth MacFarlane, creator, executive producer and voice actor of the animated hit series FAMILY GUY, AMERICAN DAD and THE CLEVELAND SHOW, will guest-voice, for the first time ever, on THE SIMPSONS season finale event airing Sunday, May 19 (8:00-9:00 PM ET/PT) on FOX. During the season finale, MacFarlane voices a charming married man whom Marge (Julie Kavner) inadvertently meets on a swingers’ website.

In the first part of the season finale event, Homer (Dan Castellaneta), Moe (Hank Azaria), Lenny (Harry Shearer) and Carl (Azaria) win $200,000 in the Springfield Lottery. But when Carl takes off to Iceland – his homeland – with all the winnings, the guys embark on a Nordic adventure to get the cash back. Then, in the second part of the season finale episode, Marge mistakes a swinging Ashley Madison-type website for a Dolly Madison-type cupcake site, not realizing it’s a destination for married people seeking liaisons. On the site, she meets the charming “Ben” (guest voice MacFarlane), who pursues her after they learn they share a love for a “Downton Abbey”-type TV series, “Upton Rectory.” Ben’s wife is guest-voiced by comic Lisa Lampanelli. Tune in to the all-new special one-hour “The Saga of Carl/Dangers On A Train” season finale episode of THE SIMPSONS airing Sunday, May 19 (8:00-9:00 PM ET/PT) on FOX.