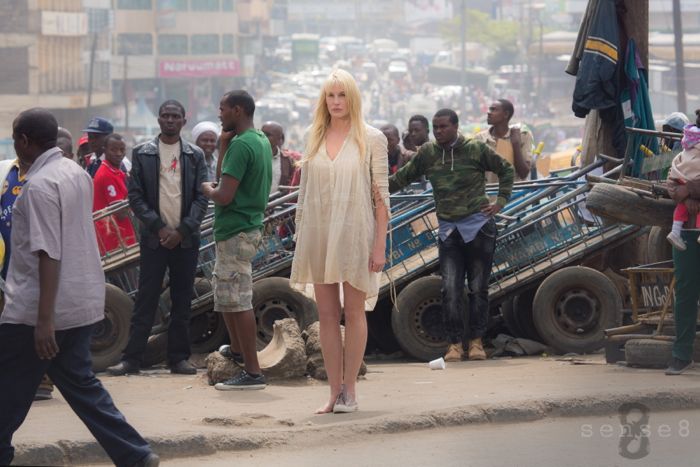 Netflix has a new drama by The Wachowskis (The Matrix) premiering this week. Entitled SENSE8, the story is truly global, following eight individuals in seven countries who are connected to one another somehow, being able to feel what the others feel and experience what they experience. There is a violent act that seems to somehow figure into forging their connection, and presumably there is a villain out there who will endanger them.

If that sounds murky, that is appropriate because SENSE8 is not clear in its intentions right out of the gate. Throughout the first hour, a LOT of characters are introduced, and each have their own plot lines threading the pilot, so there’s much to keep track of. This is not the type of show one can casually watch while cooking dinner; it takes total concentration and engagement to even begin to sort out who everyone is and what the settings are.

As you can see, it is quite an international cast, much more so than most “international” ensembles that are at least half American. Each of these individuals very much inhabits a different part of the world and exists within a different culture, which should make their connection even more jarring than it already is. Though, for some reason, the show chooses to use English instead of subtitling, which might make it slightly more accessible, but feels a little weird.

SENSE8 doesn’t try to bring the group together geographically. In fact, the pilot barely brings them together in the story at all, with a few flashes of what will become their new state, but mostly focusing on their lives as they are now. What this means is, SENSE8 is telling many different stories at once, and how they will eventually all be brought into the same orbit remains quite a mystery.

The catalyst for the series involves a woman named Angel (Daryl Hannah, Kill Bill, Steel Magnolias), trapped between her love, Jonas (Naveen Andrews, Lost), and the villainous Mr. Whispers (Terrence Mann, The Dresden Files), but this thread seems just as unconnected as the others at the start, so it’s hard to tell exactly how Angel will play a part in the other eight’s lives, with the end of hour one finally giving us a little info in that regard, but not much.

I can’t say that I enjoyed the first episode of SENSE8 all that much. It took me a good forty-five minutes of confusion and stress to even start to get a handle on what is happening. Generally, that’s not how I like to begin a series. I see that what is going on here is very complicated and I’m not sure there’s an easier way to introduce so much, but at the same time, so few of the characters start out with a compelling narrative that the barrier to entry is great. There are scenes later in the episode, especially for Jamie and Wolfgang, that get one interested and invested. But SENSE8 would work better if it began in that manner and then showed us more of their average lives, providing a more immediate way in.

Because of this, I’m not sure if I’m going to keep watching or not. The production is obviously very high-value, with a variety of interesting places (those with 4K televisions should appreciate this even more), and the acting seems sincere and solid. I certainly would not not recommend it. The question is, will the investment required, much more than your average TV show, be worth the payoff? That, I cannot tell you at this time.

SENSE8’s twelve-episode first season will be available on Netflix this Friday.