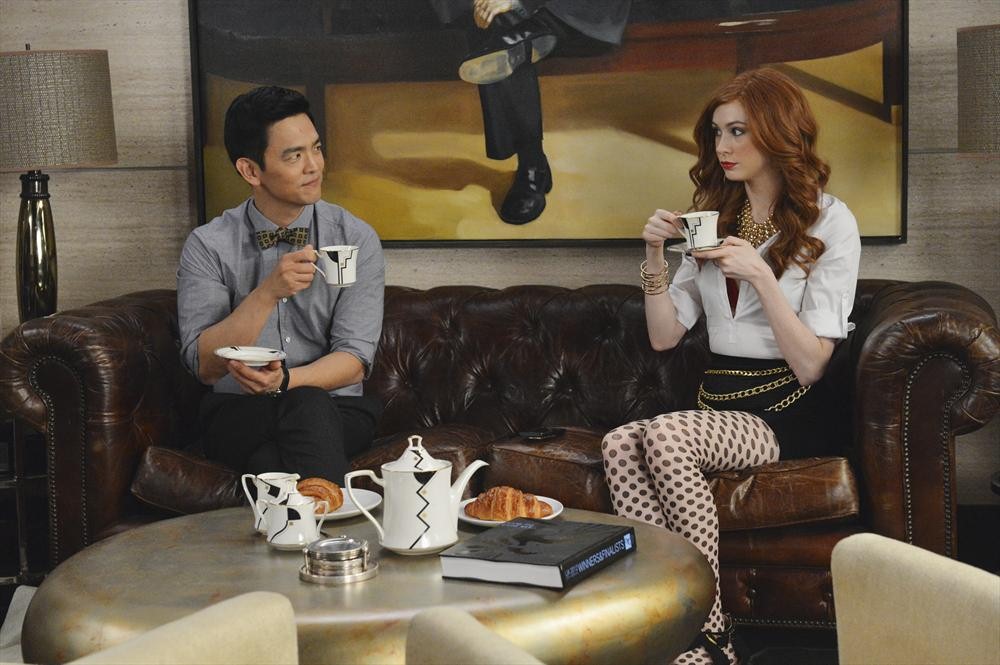 ABC’s SELFIE is equal parts straight-up remake of My Fair Lady and a commentary on the current social media landscape. It is the story of a mess of a girl, obsessed with her online followers and ‘friends,’ and an uptight guy who wants to show her how to be what he deems ‘a real person.’ The two clash in predictable ways, and one assumes that eventually both will learn much from the other, whether they become romantically entangled or not (my money is on the former).

Karen Gillian (Doctor Who, Guardians of the Galaxy, NTSF:SD:SUV) plays Eliza Dooley, the lead female at the center of SELFIE. Although from the UK, the actress takes an affected valley girl-esque accent that is super annoying at the start, though surely not the character’s real voice. Gillian is terrific with line delivery and sincerity, eliciting glimmers of sympathy for a person that should not be at all likeable, especially when you feel her pain and see the origin of her persona. While Eliza is awful in most of the pilot, she will grow into someone viewers can get behind, and has already started to do so.

John Cho (Sleepy Hollow, Harold & Kumar, American Pie) matches Gillian beat for beat as stuffy Henry, who takes on the task of remaking Eliza. He is successful and smart, but too judgmental to be truly likeable, either, even if he’s quite a bit more ‘normal’ than Eliza. He’s almost a bully to her at times, and one can tell that his obsession with fixing her is much more about the satisfying challenge it presents to him than helping the girl herself. In this way, Henry and Eliza are near-equals in the growth they need to undergo, and more similar than is immediately obvious.

The lead actors are terrific. The pilot is plagued by an uneven script, but they sell their parts, making sure the characters seem complex even if the language coming out of their mouths isn’t clever. They have immediate chemistry that seems fresh, and they are primarily the reason I plan to set a season pass for SELFIE, as surely it will improve over time.

Not that the pilot is bad. The opening is gross and a huge turn off, but as the story unfolds, it gets better and better. As a fan of the Audrey Hepburn / Rex Harrison film that is quite similar, I think the writers do a decent job of not only retelling the tale, but updating it for the modern age. It’s an interesting spin on an old classic.

The social commentary presented in the series is a reason to watch. Everyone knows at least one person that will remind them of Eliza, even if Eliza is exaggerated to nearly cartoonish proportions. We have become a people obsessed with being online, and Eliza could be the fate of many a girl in the next generation, those who grow up with devices in their hands at all times. Henry isn’t the best spokesman for the opposition, but his lambasting of Eliza’s habits speak to those who wish to keep human contact alive, and hopefully, while the internet is certainly not a trend, our ignorance of everyday life in favor of it will be. Having Eliza and Henry work at a pharmaceutical company is also ripe with as-yet-unexplored satirical possibilities.

SELFIE is buoyed by an excellent supporting cast which includes Da’Vine Joy Randolph (The Angriest Man in Brooklyn) as cheerful receptionist Charmonique, David Harewood (Homeland) as eccentric boss Sam, and Allyn Rachel (Weeds) as Eliza’s nerdy neighbor, Bryn. Each helps with the humor of the piece, and has moments to shine in the first episode, being well used.

This show is also genuinely funny. From instrumental jokes to sassy one-liners to a rhyming rap, it exudes a charm that will amuse many. I laughed out loud a few times, even on my second viewing, and may very well tune in again on premiere night.

Overall, SELFIE isn’t the best new sitcom of the season, but its cast and premise gives it a lot of potential that is barely scratched in the first installment. I have confidence that it will hew to its strengths, minimizing the elements that grate, as it goes on. For that reason, I recommend tuning in when SELFIE premieres Tuesday, September 30th at 8 p.m. ET on ABC.