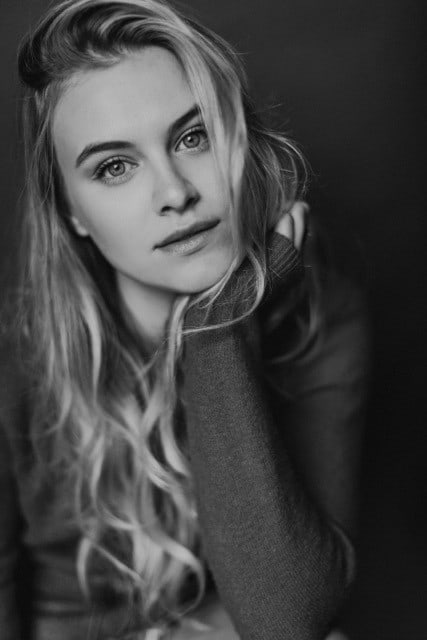 In a breakout year, Tiera Skovbye guest-stars in the CW’s new drama series RIVERDALE and Lifetime’s new movie “Secrets Of My Stepdaughter.”  In RIVERDALE, Tiera portrays Polly Cooper, who had the misfortune of falling in love with Jason Blossom in a star-crossed tale of love leading to Jason’s brutal murder. Then in “Secrets Of My Stepdaughter,” Tiera gets to switch things up as she portrays a teen who witnesses the murder of her best friend and her stepmother worries that her life may be at risk as a result. Whether portraying a young ingenue or a teen hiding a dark secret, Tiera effortlessly captures attention and the audience finds themselves rooting for her.  In an exclusive interview, Tiera talks about her roles in “Secrets Of My Stepdaughter” and RIVERDALE, as well as how each role adds to her skill set and knowledge to build upon in her career.

What initially appealed to you about the role of Rachel Kent and working on the “Secrets OF My Stepdaughter”?
TIERA:  My sister and I got an audition for the movie at the same time, for 20 minutes apart from each other and the idea of playing sisters in a movie was something we’d always wanted to do. So the initial appeal definitely was the prospect of playing sisters.

How would you describe who Rachel is?
TIERA:  Rachel Is a damaged young women desperate for attention and control.

What do you most admire and/or like about Rachel?
TIERA:  Her sheer determination to get what she wants.

What is it like working alongside Josie Davis, Cameron Bancroft, and Ali Skovbye?
TIERA:  Working along side the cast was wonderful, it was a great group and of course working with my little sis was the best. We had a lot of fun.

How did you get cast to work on the same film with your sister?
TIERA:  We both auditioned for the part and got it!

Have you worked on prior films or TV shows with your sister Ali before? Which projects?
TIERA:  Ali played my younger sister in a flash back scene in a movie I did called “Forever 16” a few years ago.

Are there any fun aspects of working with a close family member?
TIERA:  It was super fun, it made scenes between us very natural and easy. It was like doing a moving with your best friend.

What has been your favorite part about working on this project?
TIERA:  Working with my sister. Hands down. It’ll be an experience we will remember for a long time.

What has been the one thing you as an actor haven taken away from working on “Secrets OF My Stepdaughter”?
TIERA:  Rachel has a lot of problems and goes through a lot of quickly changing emotions , so for me on this project I took some risks and wasn’t afraid to go big. It was a nice reminder to not be afraid to step out of my comfort zone.

What do you hope viewers to take away from watching “Secrets OF My Stepdaughter”?
TIERA:  To have trust in your partner. There are times new people can come into your life and alter the way you feel or think, but to always go back to your partner and trust their word, because they have been with you since the beginning.

You are also currently costarring in the CW drama RIVERDALE as Polly.  What do you love the most about appearing on RIVERDALE?
TIERA:  I was a big fan of the comics growing up, so for me being apart of such an iconic show is really special.

What was your reaction when you found out who killed Jason Blossom? And when did you find out?
TIERA:  I found out during the table read for episode 112 and I of course was shocked! Didn’t see that coming!

What do you hope Season 2 brings for Polly in RIVERDALE?
TIERA:  I’m not sure what Season 2 has in store for Polly yet, but I trust the writers will make it exciting! Maybe the babies will appear?!

What has surprised you most about your career so far?
TIERA:  All of the wonderful people I have met along the way. I’ve made many life long friendships.

At this stage of your career, what do you think you have learned from the amazing variety of roles and projects you have worked on?
TIERA:  Oh many! I have learned SO many things, it’s hard to narrow it down. I guess to always stay true to yourself and not let outside influences change who you are or what you think of yourself. To stay grounded.

Then what are the perks of where you are in your career right now?
TIERA:  I’m lucky to continue working!

If there were one role you would like to revisit, which would it be and why?
TIERA:  Polly! And luckily I get to soon!

You seem to take on roles that are very challenging. Do any of your characters and the situations they find themselves in ever leave a lasting impression on you?
TIERA:  Sometimes, but I think it’s very important to be able to separate work from reality. Sometimes after a long day on set of emotional work I’ll end up exhausted and can’t do much more then sleep, haha.

Has there been any great advice you have gotten?  What advice would you offer to other upcoming and aspiring actors?
TIERA:  Don’t let anyone stop you. Don’t let any rejection or negativity sway you from following your dreams! Also never stop studying your craft, always strive to be better and stronger. Don’t be lazy!

When you first found out that your sister Ali was going to be following you into the acting world, what was your advice to her?
TIERA:  Usually Ali is the one giving me advice! Haha, she’s so smart and strong. My advice is usually the same as the question above!

At a time when women’s voices are rising to be heard and respected around the country and world, what do you recommend your fans do to lend support in that endeavor?
TIERA:  Continue to encourage and support and lift each other up. Men and women. Be a supporter, listen to each other, strengthen each other. Everyone is stronger together, lend someone a hand and have each others backs.

Do you have any other upcoming projects that you can share that fans should keep an eye out for?
TIERA:  I’ll be shooting a very cool indie this summer which I’m super excited about!