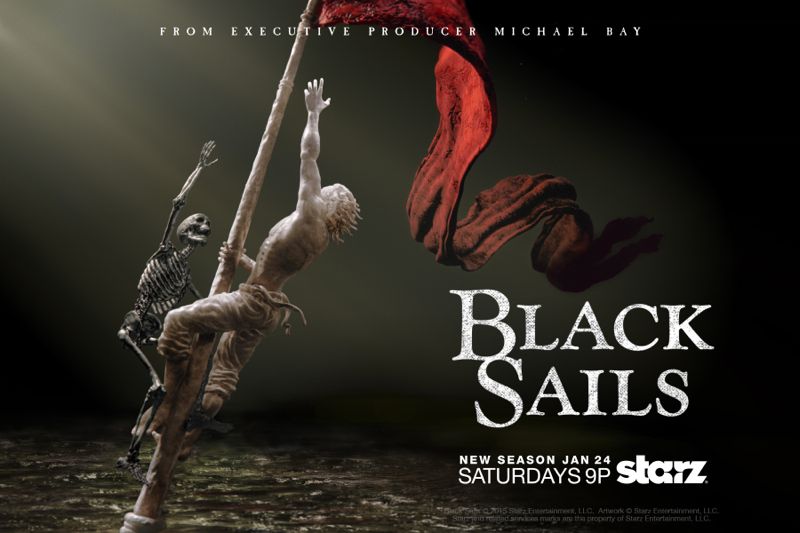 “Black Sails” season one set a STARZ viewership record for a debuting STARZ Original series during its opening weekend in January 2014, established an average of 5.3 million viewers per episode*, and is distributed in about 130 countries and territories worldwide. Starz also released a first look teaser image from season two, inspired by the Emmy®-nominated main title design.

Season two begins where we left off—The Walrus crew is stranded, with an army of Spanish soldiers standing between them and the precious Urca gold. And with their crimes against their brethren no longer a secret, Flint (Toby Stephens) and Silver (Luke Arnold) must join forces in a desperate bid for survival. Meanwhile, Eleanor Guthrie (Hannah New) struggles to maintain her grip on Nassau, as a new breed of pirate arrives in the form of Ned Low (Tadgh Murphy), a man for whom violence isn’t just a tool … it’s a pastime. As blood is spilled, and tensions mount, Charles Vane (Zach McGowan) must decide which he values more: Eleanor’s life, or the respect of his men. And unbeknownst to all of them, a prize of immeasurable value has already been smuggled onto the island … one whose discovery will alter the very landscape of their world, and force everyone in Nassau toward the ultimate judgment: are they men, or are they monsters?

“Black Sails” stars Toby Stephens as the most brilliant and feared pirate captain of his day ‘Captain Flint.’ Stephens is an accomplished stage actor also well-known for his role in Die Another Day. Hannah New portrays ‘Eleanor Guthrie,’ a beautiful and determined young woman who runs the smuggling operation on New Providence.  London-born Hannah starred in the miniseries, “El Tiempo Entre Costuras (The Time Between Seams),” the feature Fuga De Cerebros 2, and most recently in Maleficent, starring Angelina Jolie and Elle Fanning.  Luke Arnold portrays the classic character, ‘John Silver,’ in the years before his well-known feats.  Arnold is a native of Australia, where he began working in television on series including “McLeod’s Daughters,” “Rush” and “Rescue: Special Ops.”  He also went on to appear in the feature film, Broken Hill and most recently starred in the miniseries “INXS: The Michael Hutchence Story.”  Rising star Jessica Parker Kennedy is in the role of ‘Max,’ a young prostitute with an eye towards advancement. Jessica is known for her work in the television series, “The Secret Circle,” and has appeared in the films 50/50 and In Time.  Zach McGowan is featured as ‘Captain Charles Vane,’ a rival pirate captain to the brilliant and feared “Captain Flint,” played by Toby Stephens.   McGowan is most well-known for his role in the series “Shameless” and will appear in the upcoming feature film Dracula Untold.