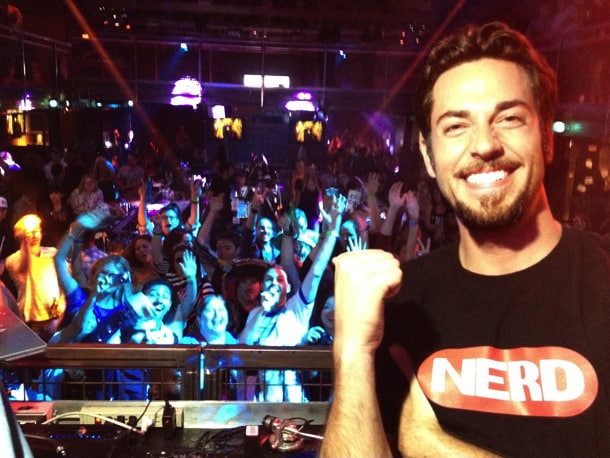 Zachary Levi and The Nerd Machine, a multimedia company dedicated to bringing the best of apparel, accessories, and both long and short form video content to customers around the globe, announced today the return of Nerd HQ during Comic-Con International 2012, July 12-15.&nbsp; Located just two blocks away from the convention floor at Block No. 16 Union and Spirits (344 7TH Ave., San Diego, CA 92101), Nerd HQ gives fans a unique experience through cutting edge technology and gaming showcases, exclusive parties including Levi’s annual Nerd party and exciting autograph signings. In addition Nerd HQ will bring back the popular “Conversations for a Cause” panel series, which will be webcast live on Break Media.&nbsp; Event sponsors include Break Media, Square Enix, VIZIO, and Xbox.

The popular “Conversations for a Cause” panel series, which benefits Operation Smile through ticket sales, allows fans access to their favorite celebrities to have un-moderated, up close conversations. This year Break Media will broadcast the panels live on their site at www.break.com/nerdhq.&nbsp; Last year’s participants included Kevin Smith, Jared Padalecki, Zachary Quinto, Nathan Fillion, Olivia Munn, Felicia Day and Seth Green among others and the series raised $40,000 for Operation Smile.&nbsp; Individual tickets will sell for $20.

“The Nerd Machine was proud to create a unique fan experience in 2011, offering exclusive access to new games, technology and an opportunity for intimate conversations with some of Hollywood’s elite creative minds,” said Zachary Levi, Founder of The Nerd Machine.&nbsp; “Last year the response was overwhelming. We at The Nerd Machine, look forward to meeting the challenge to develop 2012 Nerd HQ to exceed not only our expectations, but those who plan to attend worldwide, while maintaining a connection not available anywhere else.”

Xbox, the official gaming sponsor, will provide gaming stations featuring the newest and yet-to-be released titles including the debut the first hands-on demo of the completely reborn Tomb Raider franchise from Square Enix. Also playable exclusively at Nerd HQ will be OverRun, the new multiplayer mode coming in Gears of War: Judgment.&nbsp; VIZIO, the official technology sponsor of Nerd HQ, will provide laptops, tablets, and PCs for fans to demo. New LED monitors will fill the space and showcase the newest 3D and Internet App technology.&nbsp; Barco, the leader in 3D pixel mapping, will be providing projection technology to create the largest 3D mapping show at Comic-Con.

“We are very honored to have such great partners in Xbox, VIZIO, Square Enix and Break Media and believe their support will elevate Nerd HQ to an even higher level,” said David Coleman, Nerd Machine co-founder.&nbsp; “Great partners create a phenomenal event and we have joined forces with leaders in the gaming, technology, and entertainment industry committed to providing fans with an experience they will never forget.”

As an added feature, Spike TV will be broadcasting live from Nerd HQ on Friday, July 13 and Saturday, July 14 to their network and digital outlets through their ALL ACCESS LIVE programming.