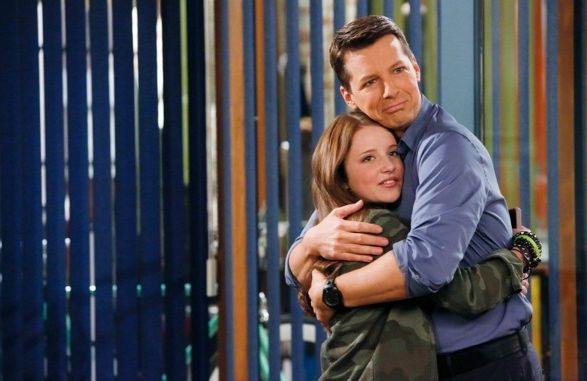 In a slew of very familiar-seeming new sitcoms this year, lacking that fresh, creative approach that really set them apart from the herd, NBC’s SEAN SAVES THE WORLD is definitely one of them. What I mean is, while a gay dad balancing being a newly-single parent and the pressures of a demanding boss is not completely done-to-death, it also doesn’t feel that far apart from a dozen others shows. The good news is, this one is a fine example of such a program.

Sean (Sean Hayes, Will & Grace) is out of the closet and divorced. When his ex-wife decides to move far away, their teenage daughter, Ellie (Samantha Isler), demands to stay in the city, and so her father, whom she usually only sees on weekends, takes her in, suddenly having to learn how to provide discipline and structure. Unfortunately, it’s at this same time that the business Sean manages gets a new owner, Max (Thomas Lennon, Reno 911!), who is not at all sympathetic to his staff having a personal life. Thus, the conflict is born.

This is a very relatable concept. There are lots of single moms and dads in the world, and most of them have at least one job. Thus, it’s a good idea for a show if the only goal is to appeal to the masses.

I really like the relationship Hayes and Isler have right off the bat. Neither Sean nor Ellie knows what they are doing in this situation, something Sean is open about, but Ellie isn’t so much, tight-lipped as girls of a certain age often are. They do have a heartwarming conversation in the “Pilot” about their living arrangement, and that makes the episode. It will be fun to watch them together.

Max is a less likeable character. He is revealed to not be completely horrible at the end of the first episode, but he is unrealistically tough. Lennon is a great comedian, and is used to broad humor, which he uses here, but the show needs something more from him like Sean and Ellie have. Until Lennon can build some layers into Max and give him a dynamic personality, something Lennon is certainly capable of, he won’t quite fit in.

Sean’s other co-workers are pretty much just as goofy. Megan Hilty, whom Hayes had great chemistry with on Smash last season, is on board as Liz, and Echo Kellum has been rescued from Ben and Kate’s cancellation to play Hunter. Combined with Vik Sahay (Chuck) as Howard, a hopefully recurring part, these guys give the office scenes their laughs as Sean tries very hard to be the peacekeeper in a tough scenario. I think it works OK that Sean is still funny, even as he plays the put-upon straight man between the owner and the peons. The actors all have something amusing to offer, and SEAN SAVES THE WORLD lets them do so. It’s a nice ensemble.

The only character that I’m not sure about is Lorna (Linda Lavin, Alice), Sean’s mother. She is too heartless to have birthed such a compassionate, determined man, and while Ellie thinks she’s fun, I’m not sure viewers will. The mean old woman has become a sitcom staple (think Arrested Development), but Sean doesn’t act like he’s been raised by such a person, so it feels a little flat in this instance.

I don’t have too many particular complaints about SEAN SAVES THE WORLD. I enjoyed it, laughing several times while watching the “Pilot.” I really like the actors involved. I think the setup is a world that stories can be told in. I just wish that it didn’t seem Hayes played it safe with the express purpose of getting a show on the air. He has been thoroughly entertaining in more outlandish roles, and while he may be proving he can also do the more “normal” parts, it’s an unnecessary demonstration. Yes, he’s a good actor. So let’s stretch him more, taking full advantage of his skill set.

He’s not the only one not reaching far enough. Creator Victor Fresco’s credits boast he has produced some great stuff such as Go On, Man Up, and Better Off Ted. All three of those were short-lived, so perhaps he has been scared off from taking the big risks. But all three are also really good shows, so I hope he brings the best parts of those over to SEAN SAVES THE WORLD eventually, even if those elements aren’t obviously present in the “Pilot.” Maybe if viewers have patience, he’ll play the network’s game for awhile, attracting ratings to a comfortable series, and then he can then spin it into something better. This show as is is currently good, not great,