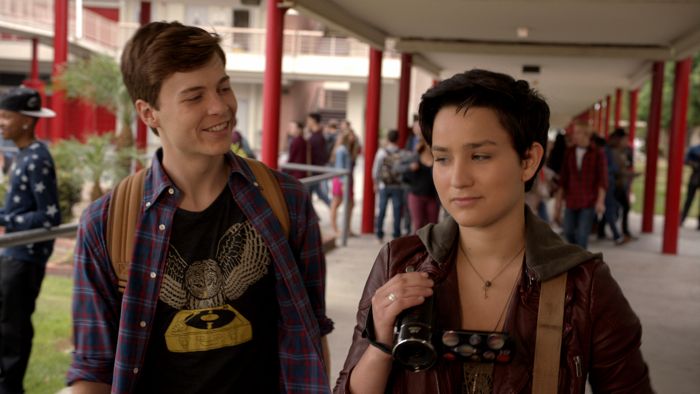 MTV’s SCREAM is a SCREAM for a new generation. If you’re not aware of the classic film that spawned three sequels, SCREAM is a slasher flick that plays with the genre using meta humor and cleverness and an actual, fleshed out story with characters one cares about. SCREAM somehow follows the rules of horror movies while simultaneously defying them, which is why it’s proved such a popular franchise, and ranks among the extremely few horror movies I actually like.

MTV seems the perfect platform from which to launch this latest incarnation. Meta humor has never been more in, and the slasher flick demo is the network’s strongest audience. By casting a bunch of young, fresh, attractive faces, MTV introduces kids to the franchise, while giving them something that fits with what they’re looking for today, the Screamproperty being highly adaptable to the times. It should pair nicely with the popular Teen Wolf show, also adapted from movies, albeit that one had to take a bigger leap from the source material.

I only recently saw 2011’s Scream 4 for the first time, and it provides a nice framework for the series. Since the time of the original trilogy, young people have adapted all-new technology, with web videos and texting now front and center, and the culture has started to recognize and be inclusive with homosexuality. Scream 4 uses those trick to its advantage, updating its image while keeping the essential story intact, and Scream does the same, while also somewhat recycling story points from the earlier installments.

No worries if you haven’t seen the movies, though. While the quartet of films are an ongoing saga, SCREAM starts over. It does not involve the same characters, nor the same town, nor even quite the same mask, but much of the structure is the same, from the deadly opening, to cheating boyfriends, to dangerous garage doors, to a character telling everyone else the rules of the genre.

Now, Noah is quick to point out that, despite the litany of great horror television shows on the airwaves right now, slasher flicks have not been a subset yet adapted because, by the nature of the thing, the cast is quickly whittled down throughout the movie. How could that possibly work for an ongoing television show, which needs a somewhat stable cast for the audience to invest in?

SCREAM can work, though. I think The Walking Dead has a good model for the show to follow. It has a basic core group, which has been slowly eaten away at by death after death, while constantly adding new members to, some of which stick and some of which don’t. SCREAM already has supporting characters ready to participate in the merry-go-round. I like the starting sextet, but you just know they can’t all possibly make it to season two, or if they do, definitely not season three. The question is, who will go first? The Scream movies have a trio that always survive, and the show can’t possibly have more than that, though I’d be willing to bet they won’t choose the same three archetypes.

Part of SCREAM’s draw, and this includes both the movies and the show, is the unpredictable nature of the plot. Because characters tell viewers what the rules are, audience members begin to feel comfortable in expecting what’s coming. Yet, the production does or doesn’t follow those same rules in an erratic fashion, keeping people on their toes. The pilot seems to indicate this is the way the show will operate, too, and that sets itself up nicely.

I was quite skeptical about a SCREAM television series. Thankfully, at least in the pilot, this one does honor to its roots, while at the same time feeling like something new. It is worthy of the name and will likely earn a season pass on my TiVo.