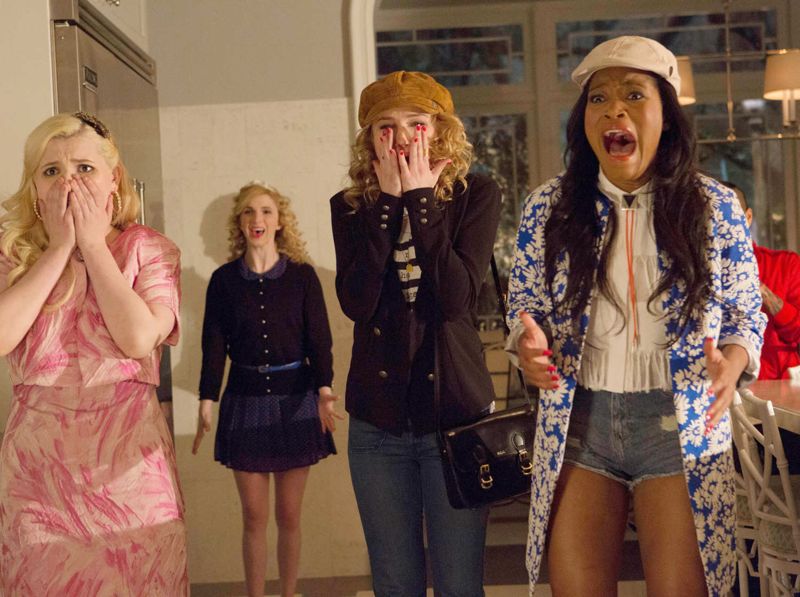 FOX’s SCREAM QUEENS is the comedy version of Ryan Murphy’s other, much darker show, American Horror Story. That is the best way to sum up the two hour pilot, which airs next week. It is ridiculous, but intentionally so, satirizing the modern horror film. It isn’t scary, but it isn’t supposed to be. I enjoyed it a great deal.

The most central figure in the first episode is Chanel Oberlin (Emma Roberts, American Horror Story, We’re the Millers), a rich, spoiled brat who is head of the Kappa sorority due to the untimely death of the previous president. Supported by her minions, Chanel #2 (singer Ariana Grande), Chanel #3 (Billie Lourd), and Chanel #5 (Abigail Breslin, Little Miss Sunshine, Zombieland), whose real names she refuses to learn, Chanel is determined to not only rule the school, but become a successful television journalist.

Of course, SCREAM QUEENS isn’t going to make it easy for her. First, Dean Munsch (Jamie Lee Curtis, Halloween, New Girl) decrees that the sorority must accept all pledges, no matter how pathetic (enter Glee’s Lea Michele, among others). Then, Chanel’s boyfriend, Chad Radwell (Glen Powell, The Dark Knight Rises), decides he can’t be with her if she’s no longer popular, due to the dean’s decision. Oh, and then of course there’s a serial killer starting to pick people off, mainly girls in and around the sorority. So there’s that, though that isn’t Chanel’s main concern.

Roberts is fantastic as Chanel, channeling her previous AHS Madison character, but without the depth. No matter what happens, nothing phases Chanel, nor makes her care about others. She is what she is. And what she is is a perfect match for Curtis, who is an equal in the amazing department. I could watch SCREAM QUEENS even if it were just the two of them going head to head. Every scene they are in is magic.

SCREAM QUEENS boasts a large cast (required to keep the body count going), and while Roberts and Curtis essentially own the spotlight, others manage to steal it for brief, wonderful moments, which come more and more frequently as the pilot goes on. Of particular note is Boone (singer Nick Jonas), who has an extremely memorable bedroom scene. But others, including national sorority president Gigi Caldwell (Nasim Pedrad, Saturday Night Live), security guard Denise Hemphill (Niecy Nash, Reno 911!), and “white mammy” Ms. Bean (Jan Hoag, Wild) also make good use of their chance to pop.

Honestly, where the plot drags is when the focus shifts to the ‘normal’ hero of the piece, Grace Gardner (Skyler Samuels, The Nine Lives of Chloe King), and her would-be boyfriend and wannabe journalist, Pete Martinez (Diego Boneta, Rock of Ages). I guess every horror movie has this type of character, and presumably they will be the ones to stop the killer. But I’m not sure they’re needed in a piece that subverts convention so much. If anything, they just drag the show down a bit. Hopefully, they, too, will be used in unexpected ways later in the season.

That being said, overall, I still think SCREAM QUEENS is great. If you don’t understand at first what the mission of the program is and instead take it seriously, you may be confused and disappointed. Once you embrace the utter lunacy and twist on archetype of many of the characters, though, it becomes very enjoyable. Ryan Murphy has taken his earnest cartoonishness of the best parts of Glee and mixed it with what he knows of horror from doing AHS to create something memorable and unique. In an age where horror is all over the television set, this is something original and different.

Plus, I just can’t wait to see who dies next and Chanel’s reaction to it!