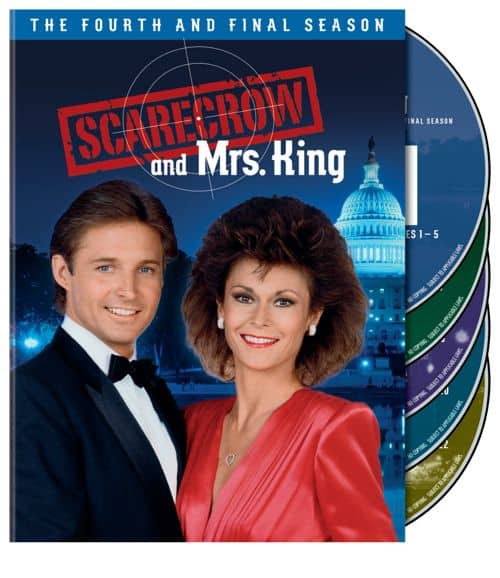 Seat42f and Warner Bros. Home Entertainment have teamed up to give FIVE lucky winners a copy of SCARECROW & MRS. KING Season 4 on DVD. For a chance to win leave a comment below telling us why you want to add SCARECROW & MRS. KING Season 4 to your DVD collection. Only one entry per person. Contest ends January 29th. Winners will be notified on January 30th via email so make sure to use a valid email address when you post your comment.

Get set for action, intrigue, romance and fun! Warner Bros. Home Entertainment (WBHE) brings the fourth and final season of one of television’s most beloved spy series to DVD with the release of Scarecrow & Mrs. King: The Complete Fourth Season. Available in stores January 22, 2013, this release will include 22 episodes of the hit series that features Kate Jackson (Charlie’s Angels) and Bruce Boxleitner (Babylon 5) as a pair of mismatched operatives working together to solve crimes. The set will retail for $39.98 SRP.

Scarecrow & Mrs. King turns up the heat in season four! Agents and partners Amanda King and Lee “Scarecrow” Stetson are consummate professionals, elite undercover experts solving The Agency’s most dangerous cases. After hours, the two lovebirds are planning a beautiful future together. But personal happiness is put on hold when a double-cross from within the ranks forces Lee into hiding from the Agency itself. And when Amanda is kidnapped, Lee must try to rescue her without getting himself killed. Their last case will test the wits, will and hearts of Lee and Amanda, as their lives – and love – are on the line in this sizzling final season.

“One of the elements that made Scarecrow & Mrs. King so successful was the genuine chemistry Kate Jackson and Bruce Boxleitner shared as the show’s two leads,” said Rosemary Markson, WBHE Senior Vice President, TV and Special Interest Marketing. She added, “This is a series that has withstood the test of time, with legions of fans pleading for its release on DVD years after its initial broadcast. Such loyalty serves as a testament to the quality of the show. We’re pleased to offer consumers this fourth and final installment on DVD so they can complete their collections.”

The award-winning Scarecrow & Mrs. King first premiered in 1983 on CBS and aired for four successful seasons.