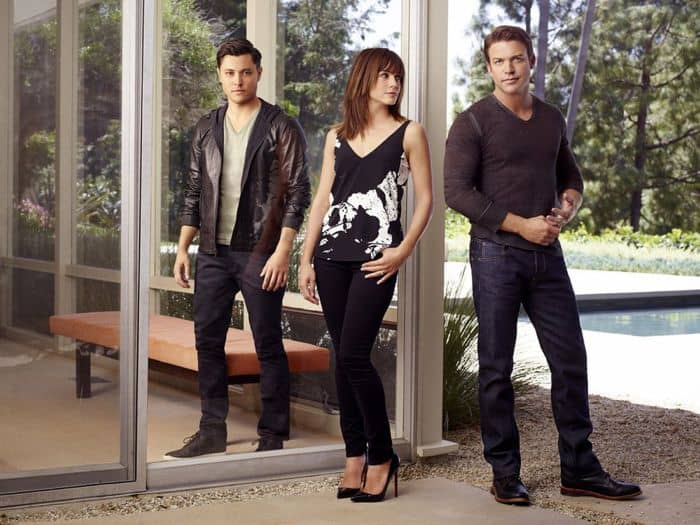 You know the familiar small drama movie story of a husband and a wife who have been married a long time, have at least one child, and have drifted apart as he throws himself into his work and she seeks someone else to help her feel alive? Throughout the ninety-minute running time, they realize their mistakes and rediscover what they love about one another, eventually fixing the problems in their marriage and being happy all over again, a mid-life reckoning that leaves their bond stronger than ever? USA is turning that concept into a series called SATISFACTION.

It’s such an intriguing idea that I’m surprised no one has done it before, at least not that I’m aware of. After all, how many relationships can be repaired so simply, especially after the long deterioration of their union has eroded them into near strangers to one another? Is it really so easy to rebuild one’s life and put the mistakes made during that time of estrangement behind you? Can a new beginning truly be found? SATISFACTION seeks to answer that question by setting up the unoriginal plot, but advancing it far beyond what most of this genre has done.

As the pilot begins, we meet Neil Truman (Matt Passmore, The Glades), a money man who absolutely hates his job. He loves his family, even though he doesn’t have much time for wife, Grace (Stephanie Szostak, Iron Man 3), and teenage daughter, Anika (Michelle DeShon), always working, even when he’s at home. This frustration isn’t held back by a nice house and a fancy TV any longer, and Neil has one of those snap moments where he has to act out. He actually has a couple of them, since his boss (Spencer Garrett, Yes Man) laughs off the first one, and Neil feels the need to keep exploding bigger until someone pays attention.

Meanwhile, while Neil might not be aware of it, Grace is equally unhappy. Her break comes one night at book club when she demands her friends accompany her to a club. Once there, she meets a charming man named Simon (Blair Redford, The Lying Game) who wants to hear her story, and even though he ends up being an escort whom she must pay if she wants sexual attention from him, the two soon begin getting together on a regular basis.

As one might expect, both Neil and Grace begin discovering each other’s secrets, all while dealing with Anika, who has her own scene of rebellion, acting out against the private school she hates. But this is only the beginning.

SATISFACTION doesn’t have a moment of confrontation, where the family talks frankly with one another. In the movies, this has to happen because that’s what’s required to air the dirty laundry so it can be cleaned and put away. Instead, the TV show keeps going forward. Most of what I’ve mentioned in the preceding paragraphs happens in the first half of the pilot, barely scratching the surface of the tale waiting to be told. This will be about emotions and motivations and feelings of emptiness and lies and desires and consequences. Can these people stay together, or are they too far removed to make it work any longer? If the pilot is any indication of the level of quality, sign me up to find out.

While most of the cast, which also includes Deanna Russo (Being Human), Katherine LaNasa (Deception), and Chris Williams (Californication), are not widely known, they are solid performers who really sell the depth and complexity of their characters. It’s easy to be drawn in by the Trumans and what they’re going through. Many will relate to their situation, even if only obtusely, and it’s the authenticity of the situation that is so fascinating.

USA has, in the past few years, allowed itself to not be boxed in any longer by only making a certain type of show. Even with the loosening of the reigns, SATISFACTION feels like a complete departure for the network, a slow burn human piece that will tell a very real story. I recommend checking it out when it premieres Thursday, July 17th at 10 p.m. ET.