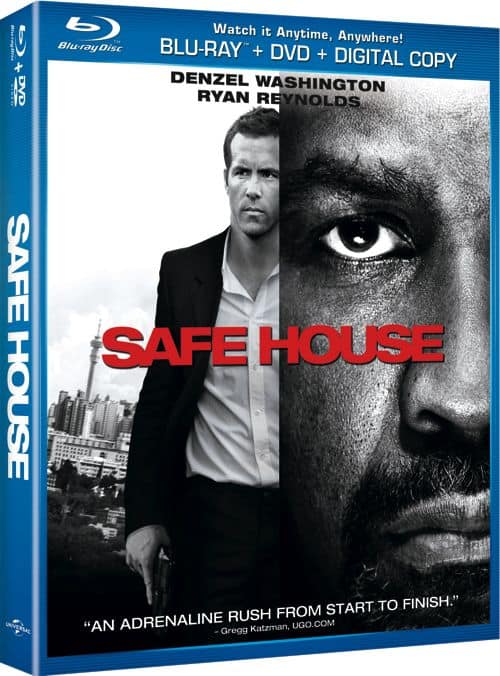 A rogue CIA operative is targeted for assassination and an idealistic rookie agent must prove himself by keeping them both alive in the exhilarating and explosive action-thriller Safe House, available June 5, 2012 on Blu-ray™ Combo Pack with UltraViolet™ and Digital Copy and DVD as well as On Demand from Universal Studios Home Entertainment. Two-time Academy Award® winner Denzel Washington (Training Day, Unstoppable) and Ryan Reynolds (The Change-Up, Green Lantern) star as unlikely allies up against an unknown enemy in an adrenaline-pumping game of cat and mouse.

Washington and Reynolds are joined by an impressive roster of actors including Academy Award® nominee Vera Farmiga (Up in the Air, The Departed), Brendan Gleeson (Harry Potter and the Deathly Hallows: Part 1, The Guard), Academy Award®-nominee Sam Shepard (Black Hawk Down, The Assassination of Jesse James by the Coward Robert Ford), &nbsp;Ruben Blades (All the Pretty Horses, Once Upon a Time in Mexico), Nora Arnezeder (Paris 36, The Words) and Robert Patrick (Flags of Our Fathers, Terminator 2: Judgment Day).&nbsp;

The Safe House Blu-ray™ Combo Pack delivers the film in perfect hi-def picture and perfect hi-def sound and features extensive bonus content including a “making of” featurette, interviews with cast and crew, and exclusive looks behind the scenes of the stylish and intense spy thriller.

The Blu-ray™ Combo Pack also includes UltraViolet™, a DVD and a Digital Copy of the film – so consumers can truly enjoy the movie anytime, anywhere, on the device of their choice!&nbsp; UltraViolet™ is the revolutionary new way for consumers to collect movies and TV shows in the cloud to instantly stream and download to computers, tablets and smart phones.&nbsp;In addition, consumers can redeem a Digital Copy of the film from a variety of retail partners, who offer many viewing options including iTunes®, iPad®, iPhone®, iPod™touch, Android, connected televisions, Blu-ray™ player apps and much more!

SYNOPSIS
Tobin Frost (Oscar® winner Denzel Washington), one of the CIA’s most dangerous traitors, resurfaces in South Africa after eluding capture for almost a decade.&nbsp;During his interrogation, the safe house is attacked by brutal mercenaries forcing rookie agent, Matt Weston (Ryan Reynolds) to take the infamous Frost on the run.&nbsp;As the masterful manipulator toys with his reluctant protege, shaking the young operative’s morality and idealism, the unlikely allies must fight to stay alive long enough to uncover who wants them both dead.&nbsp;Packed with intense action and thrilling suspense, Safe House takes you on a deadly ride through a covert world where no one and no place is ever safe.